Published on War Is A Crime .org (http://warisacrime.org)

Disclaimer: I am now a volunteer press contact for this campaign.

Moving quickly on Christmas Day after the US Senate voted 86 - 14 [1] to pass the National Defense Authorization Act of 2011 (NDAA) which allows for the indefinite military detention of American citizens without charge or trial, Montanans have announced the launch of recall campaigns against Senators Max Baucus and Jonathan Tester, and Congressman Denny Reberg, who all voted for the bill.

is one of nine states [2] with provisions that say that the right of recall extends to recalling members of its federal congressional delegation, pursuant to Montana Code 2-16-603, on the grounds of physical or mental lack of fitness, incompetence, violation of oath of office, official misconduct, or conviction of certain felony offenses.

The website Ballotpedia.org cites [3] eight other states which allow for the recall of elected federal officials: , , , , , , , and . New Jersey's federal recall law was struck down when a NJ state judge ruled that "the federal Constitution does not allow states the power to recall U.S. senators," despite the fact the Constitution explicitly allows, by not disallowing ("prohibited" in the Tenth Amendment,) the states the power to recall US senators and congressmen:

"The powers not...prohibited...are reserved to the States...or to the people." - Tenth Amendment of the Constitution.

law requires grounds for recall to be stated which show conformity to the allowed grounds. The recall drive makes the following points:

1. "The Sixth Amendment of the U.S. Constitution guarantees all U.S citizens: "a speedy and public trial, by an impartial jury of the State and district wherein the crime shall have been committed..."

2.  The National Defense Authorization Act of 2011 (NDAA 2011) permanently abolishes the Sixth Amendment right to a jury trial, "for the duration of hostilities" in the War on Terror, which was defined by President George W. Bush as "task which does not end" to a joint session of Congress on September 20, 2001.

3.  Those who voted Aye on December 15th, 2011, Bill of Rights Day, for NDAA 2011 have attempted to grant powers which cannot be granted, which violate both the spirit and the letter of the Constitution and the Declaration of Independence.

4.  The Recall Act stipulates that officials including US senators can only be recalled for physical or mental lack of fitness, incompetence, violation of the oath of office, official misconduct, or conviction of a felony offense.

5. Section 1021 of the National Defense Authorization Act [4] reads in substance: "Congress affirms that the authority of the President to detain ...A person who was a part of or substantially supported al-Qaeda...or associated forces...including any person who has...directly supported such hostilities in aid of such enemy forces...The disposition of a person...may include...Detention...without trial until the end of the hostilities..."

6. “Substantial support” of an “associated force” may imply citizens engaged in innocuous, First Amendment activities.  Direct support of such hostilities in aid of enemy forces may be construed as free speech opposition to government policies, aid to civilians, or acts of civil disobedience.

7. Section 1021 reads: "Nothing in this section shall be construed to affect existing law."  But "existing law" may be construed to refer to Padilla v. Rumsfeld in the Fourth Circuit Court of Appeals, which upheld the government's claim of authority to hold Americans arrested on American soil indefinitely.

8. Thus Senators Bacus, Tester, and Congressman Rehberg who voted Aye on December 15th, 2011, Bill of Rights Day, for NDAA 2011 have violated his Oath of Office to protect and defend the U.S. Constitution which guarantees all citizens the right to a jury trial "In all criminal prosecutions."

residents William Crain and Stewart Rhodes are spearheading the drive. Mr. Crain is an artist. Mr. Rhodes is an attorney, graduate, and the national president of the organization Oath Keepers, who are military and law enforcement officers, both former and active duty, who vow to uphold their Oath to the US Constitution and to disobey illegal orders which constitute attacks on their fellow citizens.   said:

"These politicians from both parties betrayed our trust, and violated the oath they took to defend the Constitution. It's not about the left or right, it's about our Bill of Rights. Without the Bill of Rights, there is no . It is the Crown Jewel of our Constitution, and the high-water mark of Western Civilization."

"Two time Medal of Honor winner Marine General Smedley Butler once said "There are only two things we should fight for. One is the defense of our homes and the other is the Bill of Rights."  Time to fight. "

famously ended his career as a Marine General by touring the country with his speech and book denouncing war, "War is a Racket." [5] confessed that he had spent most of his life as a "high class muscle man for Big Business, for Wall Street and the bankers...a racketeer, a gangster for capitalism..."

Eighteen states at present have recall laws, most of which do not apply to federal officials. For these and other states to recall federal officials, state legislatures would have to first pass or amend such laws.

Rising on the House floor to oppose the bill based on the military detention provisions for Americans, Rep. Tom McClintock said before the House vote:

" today, we who have sworn fealty to that Constitution sit to consider a bill that affirms a power contained in no law and that has the full potential to crack the very foundation of American liberty."

”This bill also contains misguided provisions that in the name of fighting terrorism essentially authorize the indefinite imprisonment of American citizens without charges.”

And in a New York Times op-ed piece by two retired four-star U.S. Marine generals, Charles Krulak and Joseph Hoar, Krulak and Hoar said that "Due process would be a thing of the past."

Rep. Justin Amash warned the NDAA was“carefully crafted to mislead the public,” [6]   The deceptions in the language of the NDAA, intended to allow defenders to argue that the provisions do not apply to American citizens, center around some of the wording in Sections 1021 and 1022.  Rep. Tom McClintock opposed [7] the bill on the House floor and said in a speech:

[The NDAA] specifically affirms that the President has the authority to deny due process to any American it charges with “substantially supporting al Qaeda, the Taliban or any ‘associated forces’” — whatever that means.

And Section 1022 "(b) APPLICABILITY TO UNITED STATES CITIZENS AND LAWFUL RESIDENT ALIENS" states:

(1) UNITED STATES CITIZENS.—The requirement to detain a person in military custody under this section does not extend to citizens of the .

However, although the section says it is not “required” that US citizens be held in military detention, it is nevertheless “allowed.”  Most worrisome, all accusations rest solely on the word of the government, with no witnesses, evidence, or any other form of due process available when the government is either wrong or lying.

would be the first recall drive to be launched as a result of the vote for the NDAA military detentions provisions. A number of Facebook pages appeared after the passage of the bill from locations across the country.

Facebook: "Recall Every Congressman Who Voted for the NDAA [8]"

"How to Recall US Senators and Congressmen" [10] 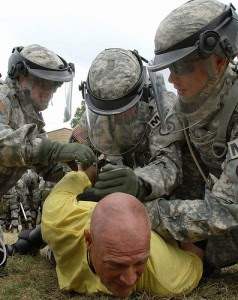 Maintained by a union shop at MayFirst.org

Posted by Max Obuszewski at 7:32 PM