Published on Friday, December 23, 2011 by CommonDreams.org

Beneath our flat, here in , wedding guests crowded into a restaurant and celebrated throughout the night. Guests sounded joyful and the music, mostly disco, thumped loudly. When the regular call to prayer sounded out at 5:20 a.m., the sounds seemed to collide in an odd cacophony, making all music indistinguishable. I smiled, remembering the prayer call’s durable exhortation to live in peace, heard worldwide for centuries, and went back to sleep. 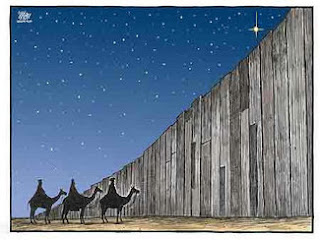 Through most of my life, I’ve found it easy to resonate with the ringing and beautiful Christmas narrative found in the Gospel of Luke, but less so with that jangling discord with which westerners are so familiar—the annual collision between (on the one hand) the orgy of gift-purchasing and gift-consumption surrounding the holiday and the the sweeter, simpler proclamations of peace on earth heralded by the newborn’s arrival. I've found myself quite surprisingly happy to spend many Christmases either in jails or among Muslims living in places like , , and now . My hosts and friends in these places have been people who are enduring wars or fleeing wars, including, as in the case of jails, a war against the poor in the .

The Christmas narrative that imagines living beings coming together across divides, the houseless family with no room at the inn, the shepherds and the foreign royals arriving, all awakening to unimagined possibilities of peace, comes alive quite beautifully in the community with which I'm graced to find myself here in Kabul.

Five of the Afghan Youth Peace Volunteers are spending winter months in the apartment here which accommodates their group as well as visiting guests such as our small Voices delegation. In recent months, the place has evolved into a resource center for learning languages and exchanging ideas about nonviolent movements for social change. I am filled with fond and deep admiration for these young people as I watch them studying each other’s languages and preparing their own delegation to visit other provinces of this land on the brink of civil war, meeting with other young people wherever they can.

I’ve often described Afghan Youth Peace Volunteers as having bridged considerable ethnic gaps in their steadfast aspiration to someday live without wars. It’s quite impressive, during this trip, to learn from them about how close several of them came to becoming armed fighters.

One young friend recalls having spent three weeks, at age 12, as part of a Taliban group. He had no choice but to go with the Taliban as a conscript. He was given a rifle, as well as adequate food, and assigned to be a sentry. "I loaded the weapon and I fired warning shots," said our young friend, who is now 21 years of age, "but I didn’t feel good about it.” A village elder intervened, saying the new recruits were too young, and the Taliban released my friend and the other young teens.

We watched a film together in which another youngster, about seven years previously, had acted the role of the leader of a group of children imitating Talib fighters. Carrying sticks, the young actors had harassed a little girl over her determination that she would learn to read. Now we asked the young man, himself a Hazara, how he felt about playing a Taliban child. He acknowledged having grown up believing that anyone who was part of an ethnic group that had persecuted his people could never be trusted.

The father of another youngster had been killed by the Taliban. Still another describes how he watched in horror as Hazara fighters killed his brother.

Last week, the AYPVs welcomed a new friend who lives in a neighboring province and speaks a different language to join them and help them learn his language. Asked about NATO/ISAF night raids and other attacks that have occurred in his area, the new friend said that families who have suffered attacks feel intense anger, but even more so people say they want peace. "However, international forces have made people feel less secure," he added. "It’s unfortunate that internationals hear stories about Afghans being wild people and think that more civilized outsiders are trying to build the country. People here are suffering because of destruction caused by outsiders."

The air, the ground, the mountainsides, the water, and even the essential bonds of familial living have been ravaged by three decades of warfare here in . People living here have suffered the loss of an estimated two million people killed in the wars. 850 children die every day because of disease and hunger.

Amid excruciating sorrow and pain, it’s good to see people still find ways to gather for celebrations, even when the sounds seem curious and the dances seem, to some, forbiddingly exotic. Differences between insiders and outsiders become less relevant as people meet one another to celebrate.

Peace can surprise us when it comes, and that alone is abundantly sufficient cause for celebration in this season, wherever we are. Dr. King wrote that "the arc of history is long but it bends toward justice," and we should not be surprised as new and growing movements around us reveal an unquenchable and ineradicable longing for simple justice. The killing fields that scar our earth and sear the memories of survivors beckon us to look and listen for new ways of living together. Massacres of innocents call to us to reject the easy and familiar and go home by an other way.

The desires to live more simply, to share resources more radically, and to prefer service to dominance are not unique to any place, season, or religion. Such desires may yet herald unions previously unimagined and a better world for every newborn, each one bringing an astonishing potential - as we do if we strive to fulfill it - for peace.