A Man in Tunisia, a Movement on Wall Street, and the Soldier Who Ignited the Fuse

Published on Sunday, December 18, 2011 by MichaelMoore.com

A Man in , a Movement on Wall Street, and the Soldier Who Ignited the Fuse

It's Saturday night and I didn't want the day to end before I sent out this note to you.

One year ago today (December 17th), Mohamed Bouazizi, a man who had a simple produce stand in Tunisia, set himself on fire to protest his government's repression. His singular sacrifice ignited a revolution that toppled 's dictator and launched revolts in regimes across the . 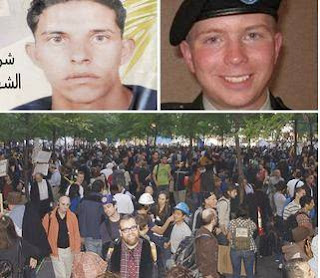 Three months ago today, Occupy Wall Street began with a takeover of 's . This movement against the greed of corporate and its banks -- and the money that now controls most of our democratic institutions -- has quickly spread to hundreds of towns and cities across . The majority of Americans now agree that a nation where 400 billionaires have more wealth than 160 million Americans combined is not the country they want to be. The 99% are rising up against the 1% -- and now there is no turning back.

Twenty-four years ago today, U.S. Army Spc. Bradley Manning was born. He has now spent 570 days in a military prison without a trial -- simply because he allegedly blew the whistle on the illegal and immoral war in . He exposed what the Pentagon and the Bush administration did in creating this evil and he did so by allegedly leaking documents and footage to Wikileaks. Many of these documents dealt not only with but with how we prop up dictators around the world and how our corporations exploit the poor on this planet. (There were even cables with crazy stuff on them, like one detailing Bush's State Department trying to stop a government minister in another country from holding a screening of 'Fahrenheit 9/11.')

The Wikileaks trove was a fascinating look into how the United States conducts its business -- and clearly those who don't want the world to know how we do things in places like, say, Tunisia, were not happy with Bradley Manning.

Mohamed Bouazizi was being treated poorly by government officials because all he wanted to do was set up a cart and sell fruit and vegetables on the street. But local police kept harassing him and trying to stop him. He, like most Tunisians, knew how corrupt their government was. But when Wikileaks published cables from the ambassador in confirming the corruption -- cables that were published just a week or so before Mohamed set himself on fire -- well, that was it for the Tunisian people, and all hell broke loose.

People across the world devoured the information Bradley Manning revealed, and it was used by movements in , , and eventually Occupy Wall Street to bolster what we already thought was true. Except here were the goods -- the evidence that was needed to prove it all true. And then a democracy movement spread around the globe so fast and so deep -- and in just a year's time! When anyone asks me, "Who started ?" sometimes I say "Goldman Sachs" or "Chase" but mostly I just say, "Bradley Manning." It was his courageous action that was the tipping point -- and it was not surprising when the dictator of censored all news of the Wikileaks documents Manning had allegedly supplied. But the internet took Manning's gift and spread it throughout , a young man set himself on fire and the Arab Spring that led eventually to has a young, gay soldier in the United States Army to thank.

And that is why I want to honor Bradley Manning on this, his 24th birthday, and ask the millions of you reading this to join with me in demanding his immediate release. He does not deserve the un-American treatment, including cruel solitary confinement, he's received in over eighteen months of imprisonment. If anything, this young man deserves a friggin' medal. He did what great Americans have always done -- he took a bold stand against injustice and he did it without stopping for a minute to consider the consequences for himself.

The Pentagon and the national security apparatus are hell-bent on setting an example with Bradley Manning. But we as Americans have a right to know what is being done in our name and with our tax dollars. If the government tries to cover up its malfeasance, then it is the duty of each and every one of us, should the situation arise, to drag the truth, kicking and screaming if necessary, into the light of day.

The American flag was lowered in this past Thursday as our war on them officially came to an end. If anyone should be on trial or in the brig right now, it should be those men who lied to the nation in order to start this war -- and in doing so sent nearly 4,500 Americans and hundreds of thousands of Iraqis to their deaths.

But it is not Bush or Rumsfeld or Cheney or Wolfowitz who sit in prison tonight. It is the hero who exposed them. It is Bradley Manning who has lost his freedom and that, in turn, becomes just one more crime being committed in our name.

I know, I know, c'mon Mike -- it's the holiday season, there's presents to buy and parties to go to! And yes, this really is one of my favorite weeks of the year. But in the spirit of the man whose birth will be celebrated next Sunday, please do something, anything, to help this young man who spends his birthday tonight behind bars. I say, enough. Let him go home and spend Christmas with his family. We've done enough violence to the world this decade while claiming to be a country that admires the Prince of Peace. The war is over. And a whole new movement has a lot to thank Bradley Manning for.

Michael Moore is an activist, author, and filmmaker.  See more of his work at his website MichaelMoore.com

Posted by Max Obuszewski at 1:41 PM