Published on Wednesday, December 21, 2011 by The Japan Times

, — As bitter winds blow around cesium and other radioactive particles spewed from the nearby Fukushima No. 1 nuclear power plant's reactors, Naoto Matsumura lights a cigarette, which he considers relatively good for his health. 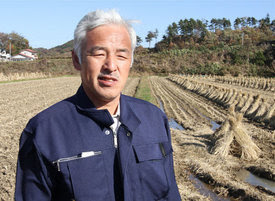 In the zone: Naoto Matsumura, who believes he is the only person still living in the evacuation zone around the Fukushima No.1 nuclear power plant. (Christopher Johnson Photo) "I would get sick if I stopped smoking; I have a lot to worry about," says Matsumura, 52, who reckons he is the only person still living within a 20-km radius of the world's worst atomic disaster since .

According to reports from Japan's Nuclear and Industrial Safety Agency published in August, following the Great East Japan Earthquake on March 11, and subsequent explosions at three reactors about 13 km from Matsumura's door, the plant operated by Tokyo Electric Power Co. (Tepco) has released 168 times more radiation than the atomic bombs that razed and in 1945.

Living without electricity or enough money to fill his generators with gas, even as the mercury is already dipping below zero, Matsumura wonders if his neighbor's supply of charcoal will be enough to keep him warm through the frigid winter in his corner of the once-thriving town of Tomioka that used to be home to 16,000 people.

He's worried, too, that the hundreds of animals he's been feeding since the area's other residents were evacuated in haste on March 12 — some 400 cows, 60 pigs, 30 fowl, 10 dogs, more than 100 cats, and an ostrich — won't survive to see another spring.

"They need help from humans," he says while lighting another of the 20-odd cigarettes he admits to smoking a day. "My supplies to feed them will be gone by the end of December. They need food, and buildings for shelter from the winter. I'm the only one taking care of everything. The government should do it, but I'm doing it."

As we stand in a rice field outside the exclusion zone about 40 km due west of the ongoing meltdowns, Matsumura tells me that he comes from an ancestral line of samurai, and he was raised by a "spartan" father to work hard and think for himself.

A lifelong farmer, he's lived alone since separating from his wife 10 years ago. When his worried children, aged 23 and 21, called from their homes in distant after the explosions in March, Matsumura says he told them: "Don't worry. If the whole world dies from this nuclear disaster, I'm still not going to die. I'm not going to leave here."

Indeed, this silver-haired, soft-spoken man of the land who has enjoyed playing golf in Saipan and the Philippines, says he now views himself as a lone maverick in a toxic desert — one hunted by an invisible enemy called "radioactivity" eating away at living things now and into the future. As the other animals perish around him, he wonders when it will be his turn.

All Matsumura's friends have left, and they no longer ask him to bring their stuff to them in the temporary shelters they must now inhabit. The automatic vending machines, which used to light up the country roads, no longer work.

After sunset, he is surrounded by miles of total darkness devoid of human movement. He has no television or Internet, only a cellphone that loses charge all too quickly. He stokes up a charcoal fire in his house, tucks himself into a futon, and goes to sleep by 7 p.m. — haunted by nightmares of what could be happening inside his body.

Waking with the rising sun, he eats another can of food, and takes his dogs for a 20-minute walk among barren fields. He spends daylight hours cleaning grave sites and tending to animals withering around him in their stalls, sheds and barns. Meanwhile, cows and pigs and other animals set free by their fleeing owners in March now fend for themselves in wild, radiation-contaminated nature.

Even nine months after everybody else fled on March 12, Matsumura says he is still shocked by the scenes of cruel death he encounters daily: the bones of cows that starved tied up or in confined spaces after they'd eaten all their fodder; a locked cage full of 20 shrivelled canaries denied by their keeper's panic even a chance to fly away free.

"People don't want to see dead animals. They would be shocked if they saw it for themselves. I see it every day," this animal-lover says quietly with real feeling.

His efforts to publicize the plight of the animals haven't worked, he says. He tells how he once showed a low-level government official around nearby Tomioka town — formerly famous for having one of the longest cherry-blossom tunnels in — and told him they should at least take away carcasses. But even though Tepco brings in thousands of workers to stabilize the reactors, he says the official told him: "Sorry, Mr. Matsumura, we can't do anything inside the 20-km evacuation zone."

On April 21, more than a month after the ongoing disaster began, Matsumura joined a protest outside Tepco's headquarters in . "I told them, 'Take care of the pets and farm animals, it's your responsibility.' But they only said, 'We are studying it.' They still haven't taken action," he reported.

In September, he showed two lower-level Tepco officials around Tomioka. During their conversation together, he says, "I told them to tell the top people about what they saw. Maybe they told them, but the top guys pretend they don't know anything," he said, pausing to light a cigarette. "They don't have human hearts. They only think about money."

Though he's not alone in lambasting Tepco, Matsumura's rage is more intense than most. He blames Tepco for "killing" his 100-year-old aunt, who he says died from exhaustion after being moved from several hospitals between Tomioka and finally Aizu-Wakamatsu in western .

"Many people died like that because of Tepco," he declares. "It's a terrible company. They have more power than the national parliament, because they control the supply of electricity, and they have power over the media through advertising."

He says Tepco, which will need massive taxpayer funding to stay afloat, has only paid nuclear refugees ¥1 million each in compensation (about $12,000).

Yet the company, which claims to be on schedule with its plan to achieve a cold shutdown of the damaged reactors by the new year, saw fit to present itself in a positive light when, on Nov. 12, it invited 35 journalists (including four from overseas) for a first media view of its wrecked nuclear plant.

"I think it's remarkable that we've come this far," Environment Minister Goshi Hosono told those on the tour. "The situation at the beginning was extremely severe. At least we can say we have overcome the worst."

Such hints of hubris, however, sit uneasily with the established facts.

In November, the esteemed journal Proceedings of the U.S. National Academy of Sciences carried the results of an international research study led by Teppei Yasunari of the Universities Space Research Association in . This found that radioactive cesium had "strongly contaminated" the soils in "large areas" of eastern and northeastern , including , while western had been relatively sheltered by mountain ranges. (To view this report, visit www.pnas.org/content/108/49/19530.)

Since the release of those findings, the Tokyo government has recently banned the sale of rice from large swaths of Fukushima Prefecture after high levels of cesium were found in crops from Onami, about 65 km northwest of the nuclear power plants.

Though Matsumura, who doesn't have a geiger counter, says he somehow thinks radiation levels are decreasing, he believes it's not safe for former residents to return to Tomioka. And he's adamant that children shouldn't eat rice from eastern , though he does himself.

Parking his white Suzuki truck near train station outside the evacuation zone, he says that his plight and that of the animals in his locality is not widely known in — largely, he riles, because TV companies have ignored him or repeatedly canceled segments about him.

"It's now impossible for me to meet with 's mainstream media," he explains. "If I say bad things about Tepco, and the government, they won't run it because Tepco is their sponsor."

One tabloid magazine, Friday, did run a two-page feature on Matsumura, with bizarre photos of him feeding an ostrich — which it quipped in bad taste was "the official mascot of Tepco."

So, as he believes himself to have been ostracized in his native , Matsumura has made a few trips to to beg foreign journalists to tell the truth about . To reach him inside the no-entry evacuation zone, one such from walked along railway tracks for 20 km under cover of darkness to evade police patrols. Searching for him, as their meeting was prearranged, Matsumura says he could hear the man's footsteps in a pitch-black railway tunnel. "When he was about 10 meters away, I called out ghost noises — and he was dumbstruck with fear. He later told me he'd thought his heart was about to explode."

Another visit Matsumura received recently was on a Sunday afternoon in November. The farmer tells how an ambulance suddenly showed up at his door. "I was a bit unnerved that they'd come into my house, and I didn't know who'd sent them," he said, adding that "they checked my body and my health, but they didn't find anything bad in particular."

He gets most passionate talking about the abandoned animals and about nuclear energy. "The whole world should stop using this bad form of energy. Anything we build with our hands can break someday," he says. "Governments should stop lying to us. Everybody in — everybody — doesn't believe the news about the nuclear situation."

As he prepares to leave me at the station and return to his home in the no-go zone before night falls, he says that Tomioka, like other towns in the evacuation zone, will disappear unless drastic action is taken immediately.

As he put it: "Only senior citizens are saying they want to move back, not the younger people. Eventually, in 20 years, all these elders will pass away, and there won't be any younger generation to maintain the circle of life. Nobody will be left."

But for now, he says, he's going to stay. "I am not bored or depressed, because I'm used to being alone. I know I am doing the right thing. My own doctor says I'm a 'champion of radiation.' "

Posted by Max Obuszewski at 6:51 PM