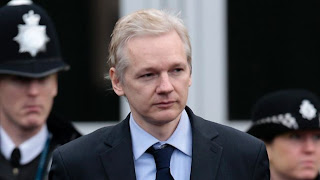 NEW claims have emerged that Australian WikiLeaks founder Julian Assange played a role in stealing US military secrets which he published online.

The 40-year-old former hacker was accused by lawyers in the of coaching Private Bradley Manning, 24, on how to crack passwords and hack into military computer networks.

Assange is under house arrest in , east of , as he fights extradition to for the alleged rape and sexual assault of two women. He faces 's Supreme Court in February to appeal his extradition.

During his lengthy legal fight, Assange said he feared the would swiftly move to extradite him from to face espionage charges due to WikiLeaks' release of sensitive diplomatic cables.

British barrister and extradition expert Julian Knowles, QC, said this new evidence could mean that Assange's legal battle may have got much worse.

"This is the first overt sign that the is looking to extradite Assange, so from that point of view, if I were him I would be concerned," Mr Knowles told The Times.

"There has been a lot of press speculation that the may want him. There is no doubt that the penalties he would face in the are very much more serious than in ."

Mr Knowles also said if Assange wins his appeal, he could be extradited to the sooner.

"If he loses, which I think he probably will, he will be going to , which would mean the will probably wait," he said.

"If he wins at the Supreme Court, then the will probably jump in. So the victory he's hoping for would not really be a victory at all."

Posted by Max Obuszewski at 9:33 AM