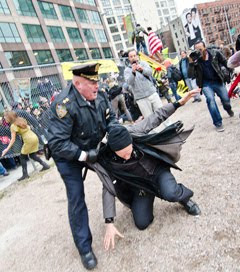 "So this bishop, three priests and a comedian are locked up together in this paddy wagon and ... "

"Zach! This is NOT funny, and I do NOT want to hear the punch line."

Actually, I appreciate the fact that our team's photojournalist has a sense of humor about getting busted and jailed at Occupy Wall Street.

But it's not a joke.

On Saturday, December 17, our man, Zach D. Roberts, along with a bishop of the and three ministers of various faiths, plus a stand-up comic, were pushed face-first into the dirt at , handcuffed and hauled off in a police van to the lockup in . 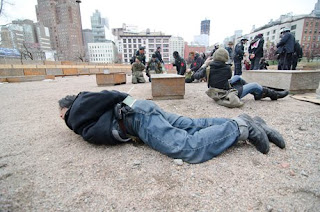 I did NOT appreciate that this follows his previous bust at Occupy Wall Street (OWS), the busting of our $600 Tokina 11-16 f2.8 lens by a cop slamming his nightstick down on Zach (reparable) and hitting the lens (not reparable). (Heck of a photo, though, just as the stick is coming down.)

Zach, who is working with the Palast investigations team via a Gil Palast Memorial Fund journalism fellowship, has been covering Occupy since day one. His astonishing in-the-action photographs from OWS have been featured in Portfolio Magazine and on the front page of The Guardian. However, credits and press credentials did not impress 's finest. 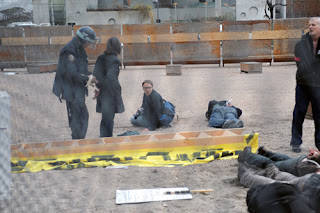 But hey, they weren't impressed by Bishop George Packard's red robes. His excellency was handcuffed and charged along with Zach and another newsman for trespassing on the property owned by the bishop's own church, Trinity. 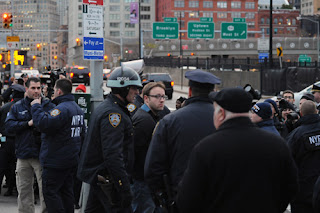 In the holding tank, our man Zach was put in with an OWS protester who wore a green cap with red blood oozing out from it, the Christmas color scheme caused by an excess of NYPD holiday zeal.

Zach was there to cover the Occupation's attempt to re-establish their encampment. OWS   asked to use a parcel of empty land owned by Trinity, the oldest and arguably the wealthiest church in , landlord for much of the real estate called Wall Street. 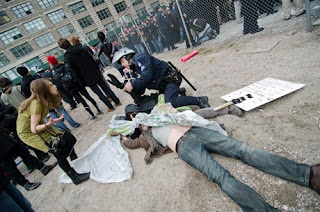 According to the Bishop (in an interview recorded, I kid you not, while cuffed in the wagon),  his Church plans to lease the property to a developer for a skyscraper and is afraid that allowing protesters to move in would devalue their holdings - bring down the neighborhood, so to speak. 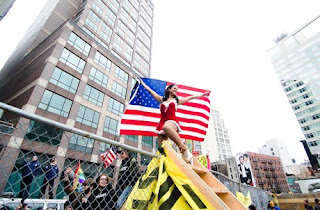 The ecclesiastical issues of this schism, while not exactly on the same order as Luther's split from the , were serious enough to be decided by the cops, who moved in after Occupy activists (clerics included) used ladders to breach the construction fences. 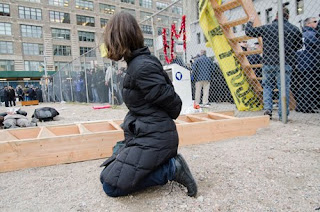 What concerns me is that the 1 percent are clearly using their blue enforcers not just to stop protesters, but also to stop coverage of the protest.

Not every cop went along. One policeman, told to arrest Zach, resisted the command: "This guy's a journalist! What are we doing!?" 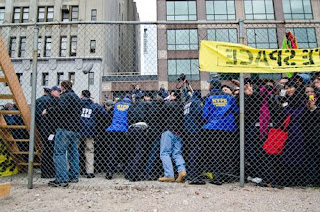 That cut no ice with his bosses. I guess if you can bust a bishop, a journalist is kind of small stuff.

The shots you see of Zach under arrest were taken by C.S. Muncy, a top-rank freelancer whose work appears in The Wall Street Journal. Frighteningly, while trying to cover Wall Street, a cop grabbed his press credential necklace but, in the mayhem, Muncy was able to yank it back. While I'm concerned about Muncy's neck, I'm more concerned about this new - and increasingly violent - attack on press freedom. 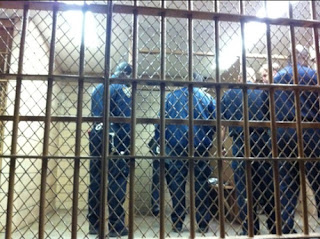 Note:  Funeral services will be held for our Tokina 11-16 f2.8 lens this week at our offices.

Zach, who was released early Sunday morning, has a court date set for February. We will keep readers informed via our Facebook page, which will include more of Zach's photos and his own diary of events.

You don’t need to be religious to understand -and embrace- the idea that "Whatsoever you did for one of the least of these brothers and sisters of mine, you did for me." But many of the 1%, in blind greed and endless schemes, have forgotten this. They have closed their eyes to what the word "society" should really means, what it can mean. But due to Occupy Wall Street, we are finally talking less about CUTS and more about BLEEDING. Instead of demanding m-o-r-e budget cuts -to be borne by the middle class and poor- we are FINALLY focusing on the shameful bleeding that the poor and middle class has endured, for all too long. Instead of talking about even m-o-r-e cuts in the taxes of millionaires....we are now talking about fairness and justice - about an economy and a political system that is increasingly run for the rich, and by the rich. Instead of talking about LESS government, we are talking about a government that WORKS FOR ALL OF US, not just a favored few. Thank you OWS, for reminding us that people -ordinary working people- really DO matter, and for helping open our eyes to what’s really going on in this country. Occupy’s attempt to occupy Duarte Square (the empty lot owned by Trinity Church), is much more than a plea for sanctuary. For like Zuccotti Park, it’s an attempt to carve out a protected space, a living conscience for the city, amid the repression. A refuge ...in a city where control-freaks would sweep us under the rug, and out of the way....in a city where they would pen us in, and permit us to death....in a city that tells us to “move on, move on”..... you don’t belong, you don’t count, you don’t have a right to be here...don’t assemble, don’t block the street, don’t trespass, don’t EXIST! They would deny us, deny our lives, and deny our very futures. IF WE LET THEM. But OWS responds, both in word and in DEED, and says: we’ve had ENOUGH - we BELONG, we STAND our ground, and we DO matter! This IS our land, and we want it BACK! The word OCCUPY...says it all! That’s why OWS has captured our imagination. That’s why a living breathing OCCUPIED public space is important for OWS. Like Lady Liberty’s never extinguished torch that burns in our harbor, OWS needs to have a concrete, continuing, persistent presence.. to remind us of what we’ve lost, of what we are, and what we can be ..to affirm, illuminate, and inspire. Trinity Church, with its oft-proclaimed ideals (and its huge land holdings), should look deep into its collective soul, do the right thing, and help OWS secure a space of refuge and hope. For if Christ were physically among us today, as He was 2000 years ago, He would be among the FIRST to climb those fences, and occupy Trinity’s Duarte Square. Of this I am certain...