Manning charged with 'aiding the enemy'; trial to begin September 21

Military judge Col. Denise Lind refused to dismiss the most serious charges against Army Private Bradley Manning, accused of leaking classified documents for transparency website Wikileaks. Thursday night Lind announced she was rejecting the motion made by the defense to throw out the charge of "aiding the enemy". Manning will now face a maximum penalty of life in prison. 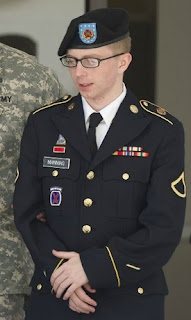 PFC Bradley Manning is escorted by military police as he departs the courtroom at on April 25. (AFP Photo/Jim Watson) Manning's attorney David Coombs maintains that there will be no proof that Manning intended to help al-Qaida when he allegedly leaked the classified material to Wikileaks.

Associated Press: No charges dismissed for soldier in Wikileaks case

Col. Denise Lind rejected a defense motion to throw out the charge of "aiding the enemy" during a pretrial hearing for Pfc. Bradley Manning. The charge carries a maximum penalty of life in prison. It was one of several motions seeking to dismiss some or all of the charges, but Lind left all 22 counts against Manning in place.

In seeking dismissal of the most serious offense, defense attorney David Coombs had argued that the charge didn't properly allege that Manning intended to help al-Qaida when he allegedly sent hundreds of thousands of classified and war reports and State Department diplomatic cables to the anti-secrecy website WikiLeaks.

Manning stated in an online chat with a confidant-turned-informant that he leaked the information because, "I want people to see the truth."

Prosecutors had argued that Manning knew the enemy would see the material when it appeared on WikiLeaks, regardless of his intentions.

Lind said Thursday that prosecutors must prove during trial that Manning knew he was giving information to the enemy. If they fail to do so, Lind indicated she would consider a defense motion to dismiss the charge.

Jeff Paterson, a leader of the Bradley Manning Support Group, said he was disappointed by the ruling but encouraged by what he called the "high hurdle" prosecutors must clear.

The decision was another setback for Manning, whose attorneys had argued for the espionage charge to be tossed out unless the government was prepared to prove the US Army private had intended to help Al-Qaeda when he allegedly passed files to WikiLeaks.

The 24-year-old could be jailed for life if convicted of "aiding the enemy," one of 22 criminal charges that judge Colonel Denise Lind let stand at pre-trial hearings this week at Fort Meade in Maryland.

Lind said she would issue instructions on the espionage count to make clear what prosecutors will have to prove against Manning when his trial starts on September 21.

The government will have to show that Manning "knowingly" and without permission passed classified information to the enemy "through indirect means," she said.

Defense lawyers insisted the government's case implies any soldier could be prosecuted for espionage if they inadvertently divulged secrets online or discussed sensitive information with news reporters.

Prosecutors, however, maintained Manning's intent was not at issue and that the government only needed to prove that the intelligence analyst knew Al-Qaeda would see the leaked information on the anti-secrecy WikiLeaks site.

Posted by Max Obuszewski at 7:30 PM