Why the Supreme Court Matters

Why the Supreme Court Matters 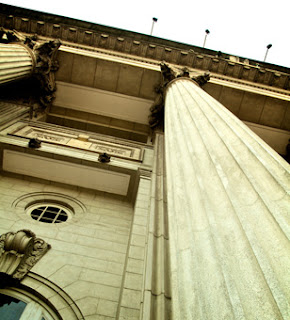 When President Gerald Ford nominated him in 1975, Justice John Paul Stevens occupied the ideological center of the Supreme Court. By the time he retired in 2010, he was the Court's most liberal member. Over those thirty-five years, the Court changed far more than Stevens did. "What was once on the extreme right is now merely conservative," wrote constitutional law professor Cass Sunstein. "What was once conservative is now centrist. What was centrist is now left wing. What was once on the left no longer exists."

According to a study using Martin-Quinn scores, "the current court is the most conservative since at least the 1930s," wrote Nate Silver of the New York Times recently. Of the ten most conservative members of the Court from 1937 to 2006, five are serving today: Clarence Thomas (1), Antonin Scalia (3), John Roberts (4), Samuel Alito (5) and Anthony Kennedy (10). The fact that Kennedy is now regarded as a moderate swing vote underscores how far to the right the Court has moved. (Only Justice Ruth Bader Ginsburg makes the most liberal list, at number 10.)

That rightward shift of the is especially pronounced today, in the wake of the ghastly 2010 Citizens United decision and the prospect that the Court may invalidate the Obama administration's healthcare law. These consequential decisions could be a frightening preview of things to come. In the next year or two, the Court will consider a number of blockbuster cases. In late April the justices will hear arguments on 's draconian "papers please" immigration law. The fall term, which begins in October, includes a challenge to affirmative action at the .

In the not-so-distant future the Court will likely decide the merits of: California's Proposition 8, which banned gay marriage, and/or the Defense of Marriage Act, which prohibits states from enforcing gay marriage laws outside their borders and denies government benefits to gay couples; Section 5 of the 1965 Voting Rights Act, which forces states and localities covered by the act to pre-clear voting law changes with the federal government to make sure they do not discriminate against minority voters; Montana's ban on corporate campaign contributions and its challenge to Citizens United; the indefinite detention of enemy combatants at prisons like Guantánamo; the ability of foreign nationals to sue corporations and their employees in the United States for human rights abuses abroad; and possibly even Roe v. Wade, given the slew of anti-abortion restrictions passed by Republicans since the 2010 elections. "It's the most startlingly jampacked period in the past century," says Tom Goldstein, a veteran Supreme Court litigator and publisher of SCOTUSblog. "It's hard to imagine a more perfect storm of cases that will be granted or argued right before the presidential election that are so freighted with politics."

Based on recent history, there's a good chance the Court's conservative majority will prevail in most of these cases. During the , conservatives have been in the majority in 71 percent of divided cases, the highest percentage since the beginning of the in 1953, according to the Times. In the next year or two, the Court could undermine key rights for minorities, immigrants, women, the LGBT community, historically disenfranchised voters, detainees and human rights activists.

These high stakes add significance to the 2012 election. Regardless of what happens with healthcare reform, the Court should be a major issue in November. A 6-3 conservative Court under a President Romney would be nothing like a 5-4 moderate-to-liberal Court under President Obama. "There's no overlap between the people Obama would appoint to the Court and the people Romney would appoint," says Pam Karlan, co-director of 's Supreme Court Litigation Clinic. "There's more than just daylight."

Four justices are now in their 70s: Ginsburg (79), Scalia (76), Kennedy (75) and Breyer (73). If Romney wins, he could shore up the right flank of the Court; if Obama wins, he could tip the balance of power back to the center. "Citizens United would have never been put into law and would never have been sold to the highest bidder had Al Gore won in 2000," says former DNC chair Howard Dean. "Obama, if he wins, is going to appoint maybe one or two more Supreme Court justices. That could make all the difference." At the Conservative Political Action Committee convention in February, Wayne LaPierre, head of the NRA, warned conservatives about an Obama second term. "If Obama wins re-election, he will likely appoint one—and perhaps three—more Supreme Court justices," LaPierre said. "It'll be the end of our freedom forever."

Some of this rhetoric is election-year sloganeering designed to rile up the base. But not only would Obama and Romney make vastly different Court appointments; they would ask the Court to hear very different cases, and they would take radically different positions on the cases it does hear. And, of course, the legislation that will come before the Court partly depends on who wins in November.

Conservatives have long focused on the Court, railing against "activist judges" since the days of Brown v. Board of Education. Progressives are only now fully comprehending the dangers of a judiciary dominated by conservatives, who have spent decades cultivating their strength through institutions like the Federalist Society. "The conservative base is much more energized and aggressive about the Court than the progressive base," says Doug Kendall, president of the , a center-left legal advocacy group. "Progressives are fighting against a thirty-to-forty-year mobilization effort against the and Roe v. Wade."

The federal judiciary is as important as the Supreme Court— something the Bush administration understood in a way the Obama administration has not. By the time he left office, Bush had appointed a third of all serving federal judges, stacking the bench with "smart, young, aggressively conservative judges," says Karlan. Aside from nominating Justices Sonia Sotomayor and Elena Kagan to the High Court, Obama has done little to remake the judiciary. Senate Republicans under Mitch McConnell have filibustered Obama's nominees, with little pushback from the administration or Senate Democrats. "Rahm Emanuel kept telling people that the left doesn't care about judges," says Karlan, "and the base wouldn't punish Obama for not filling judicial vacancies."

Consider these mind-boggling statistics: March 27 marked the thousandth day with a record-high eighty vacancies on the federal bench. Obama's judicial nominees have waited, on average, five times as long as Bush's to be confirmed by the Senate. Obama has appointed forty-five fewer justices than Bill Clinton and thirty-six fewer than Bush at similar junctures of their presidencies. Obama could leave office with more judicial vacancies than when he entered.

The possibility that healthcare reform may be overturned has belatedly forced Obama to pay attention to the Supreme Court. "It's nice that the president has finally recognized, after nearly four years in office, that the Court matters a lot," says Karlan. "Up until now, the president has had this 'minimalism' position toward the courts. He's put virtually no effort in building a lower court bench that has progressive and moderate values."

Obama's recent statements about the Court should be part of a broader focus on the judiciary. If ever there was a time for the president to run against the Court, it is now. According to the latest polling, trust in the judiciary is the lowest it's been since 1976. The Supreme Court's approval ratings have dropped fifteen points in the past two years, largely because of the Citizens United decision, which more than 60 percent of Americans disapprove of. (By contrast, the 2000 Bush v. Gore decision mostly increased Republican support for the Court.) "Recent polling shows that more and more Americans are disenchanted with the Court and believe it is just like the other two partisan branches of government," says Nan Aron, president of the Alliance for Justice, a consortium of progressive legal groups.

Citizens United has crystallized everything that's wrong with the Court today—and it could get a lot worse, given the crucial issues looming on its docket. If Obama wants to frame the election as a battle of the 99 percent versus the 1 percent, there's no sidestepping the heightened importance of the Supreme Court. "To borrow from John Roberts's metaphor," says Karlan, "you can have all the players, but if the other side has all the umpires, you're not going to win."

This story originally appeared in The Nation.
Copyright © 2012 The Nation – distributed by Agence Global.

Posted by Max Obuszewski at 8:32 PM