Could We Stop "Signature" Drone Strikes in Yemen and Pakistan?

Could We Stop "Signature" Drone Strikes in and ? 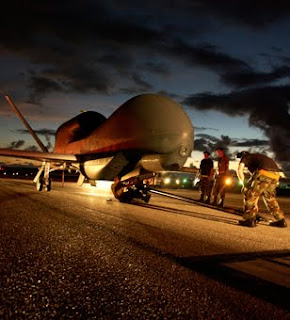 (Photo: Miranda Moorer / Flickr)The government has been increasingly carrying out drone strikes in countries with which is not at war, and killing people with drone strikes who have no dispute with the . Last week, The Washington Post reported that the CIA had asked for authority to expand its drone strike campaign in by launching strikes even when it does not know the identities of those who could be killed. Such "signature strikes" allow the CIA to hit targets based solely on intelligence indicating patterns of "suspicious behavior."

But such "signature strikes" increase the risk of killing innocent civilians, as well as the risk of killing people who have no dispute with the . This week, The New York Times and The Washington Post reported that authority to expand the drone war in had been granted.

According to last week's Washington Post report, some US officials voiced concern that incidents in which civilians and local insurgents who are not related to attacks on the US are killed could become more frequent if the CIA is given the authority to use signature strikes in Yemen. "How discriminating can they be?" asked a senior official. Al-Qaeda's affiliate in "is joined at the hip" with a local insurgency whose main goal is to oust 's government, the official said: "I think there is the potential that we would be perceived as taking sides in a civil war." Already - even without this proposed expansion in CIA authority to carry out signature strikes - the Long War Journal estimated that the had killed 48 civilians with drone strikes in since 2009.

The Washington Post noted that "signature" drone strikes have been part of the CIA's drone program in for several years. But such strikes have been very controversial in Pakistan and they are now largely stopped there, The Associated Press reported on April 13: "the White House has raised the bar to who the CIA is allowed to target, applying new limits and all but curtailing so-called 'signature strikes' where CIA targeters deemed certain groups and behavior as clearly indicative of militant activity."

In defending the drone strikes in in remarks in January, President Obama claimed that the strikes targeted "people who are on a list of active terrorists." But as The New York Times subsequently pointed out, "American officials familiar with the rules governing the strikes and who spoke on the condition of anonymity said that many missiles had been fired at groups of suspected militants who are not on any list. These so-called signature strikes are based on assessments that men carrying weapons or in a militant compound are legitimate targets."

The fact that President Obama would claim that drone strikes only target "people who are on a list" in Pakistan when that hasn't been true in the past, the report that the White House has subsequently curtailed such signature strikes in Pakistan and the report that senior US officials oppose giving the CIA authority to conduct signature strikes in Yemen suggest that such strikes are particularly controversial and politically vulnerable.

Abdul-Ghani al-Iryani, a Yemeni political analyst and head of a group that campaigns for democracy, recently told The New York Times that increased US military involvement in Yemen could inflame the situation in southern Yemen, and possibly draw in more foreign fighters. "I think it is going to be counterproductive," he said. "We have new leadership. The Yemeni military should deal with this itself."

The administration appears to be involving us in a new war in without Congress having authorized a new war, and without significant public debate having taken place.

But we can still do something about this. The fact that signature strikes have reportedly been curtailed in suggests that signature strikes can also be curtailed in . Until now, there has been very little effort to engage the public on the side of American diplomats who want drone strikes to be sharply limited to targeting people known to be planning attacks on the . It's time for that to change, and we have to start somewhere. Urge President Obama and your representatives in Congress to reject the use of signature drone strikes in and .

Posted by Max Obuszewski at 5:47 PM