Teams of scientists have already found debris and levels of radiation far off the coast of , one year after the nuclear disaster at . Reports are now suggesting that nuclear radiation has traveled at a steady pace. That contaminated debris and marine life could reach the coast as soon as one year from now, depending on ocean currents. 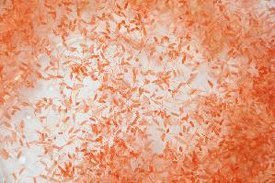 A sample of copepods taken during a June 2011 cruise aboard the R/V Ka'imikai-O-Kanaloa off the northeast coast of . (Ken Kostel, Woods Hole Oceanographic Institution) Radiation from 's nuclear disaster is appearing in concentrated levels in sea creatures and ocean water up to 186 miles off of the coast of . The levels of radiation are 'hundreds to thousands of times higher than would be expected naturally' according to Woods Hole Oceanographic Institution (WHOI). Researchers are questioning how the radioactive accumulation on the seafloor will effect the marine ecosystem in the future.

"What this means for the marine environment of the Northwest Pacific over the long term is something that we need to keep our eyes on," said the WHOI.

"We saw a telephone pole," study leader Ken Buesseler, a marine chemist and oceanographer at WHOI, told LiveScience. "There were lots of chemical plants. A lot of stuff got washed into the ocean."

The Tohoku earthquake and tsunami of March 11, 2011, led to large releases of radioactive elements from the Dai-ichi power plants into the . To find out how that radiation spread in the waters off Japan, in June researchers released "drifters" — small monitoring devices that move with the current and take measurements of the surrounding water.

The drifters are tracked via GPS, showing the direction of currents over a period of about five months. Meanwhile, the team also took samples of zooplankton (tiny floating animals) and fish, measuring the concentration of radioactive cesium in the water.

Small amounts of radioactive cesium-137, which takes about 30 years for half the material to decay (called its half-life), would be expected in the water, largely left over from atmospheric nuclear tests in the 1960s and the accident in 1986. But the expedition scientists found nearly equal parts of both cesium-137 and cesium-134, which has a half-life of only two years. Any "naturally" occurring cesium-134 would be long gone. [...]

The team also looked at the amounts of cesium isotopes in the local sea life, including zooplankton, copepods (tiny crustaceans), shrimp and fish. They found both cesium-137 and cesium-134 in the animals, sometimes at concentrations hundreds of times that of the surrounding water. Average radioactivity was about 10 to 15 Bq per kilogram, depending on whether it was zooplankton or fish (concentrations were lowest in the fish).

Sampling the Pacific for Signs of Fukushima (WHOI):

An international research team is reporting the results of a research cruise they organized to study the amount, spread, and impacts of radiation released into the ocean from the tsunami-crippled reactors in . The group of 17 researchers and technicians from eight institutions spent 15 days at sea in June 2011 studying ocean currents, and sampling water and marine organisms up to the edge of the exclusion zone around the reactors.

Led by Ken Buesseler, a senior scientist and marine chemist at the Woods Hole Oceanographic Institution (WHOI), the team found that the concentration of several key radioactive substances, or radionuclides, were elevated but varied widely across the study area, reflecting the complex nature of the marine environment. In addition, although levels of radioactivity in marine life sampled during the cruise were well below levels of concern for humans and the organisms themselves, the researchers leave open the question of whether radioactive materials are accumulating on the seafloor sediments and, if so, whether these might pose a long-term threat to the marine ecosystem. The results appear in the online edition of the journal Proceedings of the National Academy of Sciences (PNAS).

"Our goal was to provide an independent assessment of what the Japanese were reporting and also to get further off shore to sample in places where we thought the currents would be carrying most of the radionuclides," said Buesseler. "We also wanted to provide as wide ranging a look as possible at potential impacts on the marine system to give a better idea of what was going on in the region, but also to provide a stronger baseline from which to measure future changes." [...]

Another open question is why radiation levels in the waters around have not decreased since the Japanese stopped emergency cooling operations. According to Buesseler, it may be an indication that the ground surrounding the reactors has become saturated with contaminated water that is slowly seeping out in to the ocean. It may also be a sign that radionuclides in ocean sediments have become remobilized.

"What this means for the marine environment of the Northwest Pacific over the long term is something that we need to keep our eyes on," said Buesseler.