The Hopkins Connection A  P U B L I C  F O R U M  ROBOTIC WARFARE takes place on Friday, April 27 from 4 to 6 PM at Johns Hopkins University, Mergenthaler 111, HOMEWOOD CAMPUS, 3400 N. Charles Street, Baltimore, MD 21218. In recent years, remotely-controlled drones have been used to launch missiles against human targets, even in countries where the

is not at war, including , , and . Hundreds of noncombatants, including scores of children, have been killed. In ,

The Applied Physics Laboratory at has been directly involved in designing these drones.  Should be involved in drone warfare? Panelists are COL. ANN WRIGHT (RET). former Army policy analyst and diplomat, anti-drone activist & DEREK DENMAN, Political Science, .  A discussion period will follow the presentations.  The event was organized by the Human Rights Working Group at and co-sponsored by the Graduate Representative Organization.

As Snowe wraps up her time in the Senate, we need her to advocate for a sane arms policy.

- Tax season is upon us. We're all acutely aware of gaps between revenue and expenses. The imperative to cut federal spending is clear. 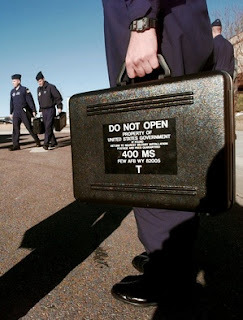 Air Force personnel await transportation to missile silos after a 1997 briefing in Even after New START cuts are implemented, the United States will still have 1,550 warheads deployed, with thousands more in reserve.

Where can savings be achieved?

I'm back living in after three years in working for Physicians for Social Responsibility, striving to reduce global threats to human health and survival.

Like Sen. Olympia Snowe, R-Maine, I have to report that legislators inside the Beltway can be pretty dysfunctional sometimes. Too often, politicians put partisan politics ahead of the nation's highest priorities.

What priorities are higher than our national security?

On Jan. 5, President Obama and Defense Secretary Leon Panetta unveiled a robust new military strategy. They took into account the relatively modest reduction in defense spending over the next decade that was wisely mandated by the Congressional Budget Control Act last year.

Depending on how the debate over the 2013 budget goes this year, even deeper cuts may be needed. It's essential that a review of nuclear weapons spending be included in the upcoming budget debate.

The experienced professionals in the Pentagon charged with protecting our national security have given this challenge much thought. After months of internal deliberation, they concluded, "It is possible that our deterrence goals can be achieved with a smaller nuclear force, which would reduce the number of nuclear weapons in our inventory as well as their role in national security strategy."

From a medical and ethical perspective, it's simply unacceptable to continue to have a national security strategy based on mass murder of others and national suicide for ourselves.

The detonation of a single nuclear weapon in an urban area would kill hundreds of thousands of innocent civilians, perhaps millions depending on the city. A limited nuclear exchange, even if it didn't involve the directly, would trigger massive disruption of agriculture and commerce everywhere, likely including a global famine.

The current nuclear stockpile is bloated beyond any reasonable purpose. Even after the reductions in the New START agreement are implemented, we will still have 1,550 strategic warheads deployed on submarines, bombers and land-based intercontinental ballistic missiles, with thousands more held in reserve.

Meanwhile, some are still clinging to outdated Cold War thinking and pushing for new fleets of nuclear submarines, bombers and missiles.

Each proposed new nuclear submarine will cost $29 billion to build and operate, according to the Pentagon. And nuclear weapons boosters want 12 of them. If we cut that number to eight, it would save $116 billion over the lifetime of that program. And would still be fully capable of destroying every major city in and in 30 minutes flat.

The purchase price alone for the new nuclear bomber program is estimated to be $50 billion. Currently operating B-52 and B-2 bombers are designed to stay in service for at least another 25 years.

Simply delaying the start of the new bomber program for 10 years would save $18 billion in research and development costs and give us time to determine if this massive new undertaking is really needed.

As long as we maintain such huge overkill capacity, will respond in kind. We would all be safer with fewer nuclear weapons in the world.

Snowe has served citizens well in both houses of Congress since 1979. Her thoughtfulness in approaching national priorities is deeply respected by her colleagues.

We need her common-sense approach now, as she completes her final term in the Senate. We need her to speak up for a sane nuclear weapons policy, to save billions of taxpayer dollars by reducing unneeded nuclear weapons spending while enhancing our national security.

Dr. Peter Wilk, a psychiatrist practicing in Portland, is a former executive director of the national organization Physicians for Social Responsibility and a member of its chapter.