There is a silent vigil on Fri., Apr. 6 from 5 to 6 PM outside of Homewood Friends Meeting, 3107 N. Charles St., in opposition to war in Afghanistan, Iraq and Pakistan. Placards say: "War Is Not the Answer." The silent vigil is sponsored by AFSC, Friends and Stony Run Meetings. Since it is First Friday, there will be a potluck dinner after the vigil, followed by a film.

This is an Oscar-winning documentary about the financial crisis caused by Wall Street.  Directed by Charles Ferguson in five parts, the film is about the systemic corruption in the financial sector.  It begins with a look at how was highly deregulated in 2000 and its banks were privatized. When Lehman Brothers went bankrupt and AIG collapsed on September 15, 2008, and the rest of the world went into a global recession.

The financial industry was regulated from 1940 to 1980, followed by a long period of deregulation. Since deregulation, we have suffered with the savings and loan crisis costing taxpayers about $124 billion; next up was the 2001 Internet Stock Bubble with $5 trillion in investor losses; and then in 2008 the mortgage fraud crisis brought on the current depression, which cost $20 trillion.

Matt Damon is the narrator of the first film to provide a comprehensive analysis of the global financial crisis of 2008.  Maria Allwine, Green Party candidate for U.S. senator, will lead the discussion.

Protests continue in today, the day after 77-year old Dimitris Christoulas committed suicide outside the parliament to protest the country's austerity measures.  Dimitris' death has put renewed attention to the plight of the Greek working class in the face of crippling austerity cuts and has prompted more debate over the economic conditions in the country. 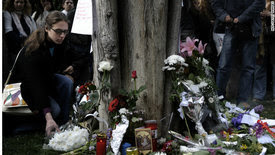 People lay flowers at the site where retired pharmacist Dimitris Christoulas shot himself at Syntagma square in on Wednesday. (Photo: Getty Images) The retired pharmacist left a note which clearly blamed the austerity crisis in for his poor quality of life. "I see no other solution than this dignified end to my life, so I don’t find myself fishing through garbage cans for my sustenance," the note said. His 91-year old neighbor Thymios said: "I used to tell him that taking to the streets is the only way to protest. But in one of our last meetings he said: 'I take to the streets and go to rallies but maybe I should go to parliament to blow my brains out'"

Within hours of the suicide, an estimated 1,500 people gathered to protest the cuts to salaries, pensions and public services that have come to define the Greek economy in recent years. has received two recent economic bailout packages, both of which were attached to harsh austerity measures such as the suspension of 30,000 public sector workers, the end of collective bargaining on behalf of public sector employees and a 20 percent cut to pensions.

Today, another protest rally in on Thursday afternoon is circulating on Facebook and other social media sites.

Thousands joined together to pay their respects to Christoulas on Wednesday night at the square, which faces the parliament building and has been the scene of most of the anti-austerity rallies in recent years.

Christoulas was active in the anti-austerity movement.

"The Tsolakoglou government has annihilated all traces for my survival, which was based on a very dignified pension that I alone paid for 35 years with no help from the state. And since my advanced age does not allow me a way of dynamically reacting (although if a fellow Greek were to grab a Kalashnikov, I would be right behind him), I see no other solution than this dignified end to my life, so I don’t find myself fishing through garbage cans for my sustenance. I believe that young people with no future, will one day take up arms and hang the traitors of this country at Syntagma square, just like the Italians did to Mussolini in 1945"

Fluttering on a nondescript balcony in a middle-class neighborhood, the remnants of a banner declaring "I won't pay" bear witness to the protest Dimitris Christoulas staged against 's economic crisis and the politicians he blamed for it.

For months the banner hung as a gesture of resistance to one-off taxes imposed by the government under a savage austerity program demanded by 's foreign lenders.

On Wednesday the 77-year-old retired pharmacist staged his final act of defiance. Christoulas went to the city's main and shot himself in the head outside parliament.

"My father's handwritten note leaves no room for misinterpretation. His whole life was spent as a leftist fighter, a selfless visionary. This final act was a conscious political act, entirely consistent with what he believed and did in his life."
-- Emy ChristoulaIn a suicide note Christoulas, a leftist, said his age prevented him from taking "dynamic" action.

"I cannot find any other form of struggle except a dignified end before I have to start scrounging for food from the rubbish," he wrote, adding that one day young Greeks would take up arms and hang the national traitors upside down in Syntagma Square.

Police have reported at least four people have tried to kill themselves because of financial troubles this week but the case of Christoulas particularly shocked the nation.

Ripples from the suicide were being felt across on Thursday and in corridors of power, far from the narrow street in the Ambelokipoi district where Christoulas lived for years.

Stunned Greeks asked if a flawed recipe of austerity cuts to save the country was pushing its citizens to the brink - and family and friends said that is exactly what Christoulas had hoped to accomplish.

"My father's handwritten note leaves no room for misinterpretation. His whole life was spent as a leftist fighter, a selfless visionary," his only daughter, Emy Christoula, 43, said in a statement.

"This final act was a conscious political act, entirely consistent with what he believed and did in his life."

She recalled as a child attending a 1975 concert by Greek leftist composer Mikis Theodorakis, where she and her father sang together. For some dreamers, "committing suicide is not an escape but a cry of awakening", she said.

Friends and acquaintances describe Christoulas as a quiet and gentle man, but also a passionate leftist deeply shaken by the pain that the crisis had inflicted on his fellow citizens.

To many who knew him, "Makis" was a hero - a martyr who had jolted Greeks into asking whether spending and salary cuts prescribed by the foreign lenders in exchange for financial aid as lurched towards bankruptcy had gone too far. 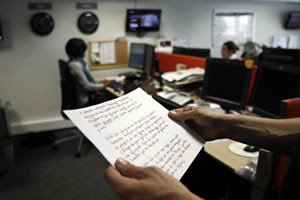 A Reuters journalist reads a copy of a note written by Dimitris Christoulas who committed suicide at the central Syntagma square in April 5, 2012. The Greek pensioner's suicide outside parliament has quickly become a symbol of the pain of austerity. Reuters/Yorgos Karahalis"The way he did it made the difference. It was a political act," said 91-year old Thymios, a fellow-member of Christoulas's neighborhood association, who would not give his last name.

"Maybe the right thing would be to keep fighting but his act was symbolic: He went into the politicians' 'nest' - parliament - and humiliated them."

A HINT OF HIS INTENTIONS

Thymios said his neighbor had hinted at his intentions during a recent encounter, although few people had expected him to carry it out.

"I used to tell him that taking to the streets is the only way to protest. But in one of our last meetings he said: 'I take to the streets and go to rallies but maybe I should go to parliament to blow my brains out,'" Thymios said.

The retiree had lived in the neighborhood for years, becoming an active supporter of efforts to rid it of drugs. Divorced, Christoulas lived alone in his first-floor apartment. His ex-wife, also a pensioner, held a job in national broadcaster ERT's accounting office, police said.

Christoulas sold his pharmacy in 1994 and retired. Fond of reading political essays and books, he spent many an evening in Elias Tsironis's bookshop in the neighborhood, perusing titles and chatting about politics and the deepening recession.

"What he did was very courageous. Often it is from the people you least expect that something starts, like a spark," said the 50-year-old Tsironis, who had come by his old friend's apartment building to inquire about the funeral.

About a year ago or so, Christoulas told the bookshop owner to come to his apartment to take all his books and give them away to people in need.

"What he did was very courageous. Often it is from the people you least expect that something starts, like a spark""He felt other people should be able to benefit from the books since he had already read them," Tsironis said.

The last book he bought from Tsironis was "'s ", which examined the similarities between the Roman city - which was beset by a decadent, corrupt social system and finally destroyed by a volcano - and present-day .

Lately, the pharmacist had looked pale and weak, neighbors said. Local media said he suffered poor health and Kathimerini newspaper said he had struggled to pay for his medication.

Last summer, Christoulas hopped daily on the subway with a small bag under his arm to attend "Indignant" protests against austerity and the political elite on .

Towards the end, Christoulas appeared to become increasingly exasperated by the state of affairs in his country. is in its fifth year of recession, with one out of five Greeks jobless. Tax hikes have accompanied wage and pension cuts.

"A few days ago, he told a friend that he could not understand this apathy and asked how could people sit around without protesting," said 60-year old Ilias Sirakos, owner of a store where Christoulas came in to pay his power bills.

"He is a hero. It takes guts to do something like that."