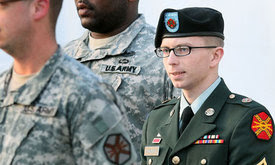 Bradley Manning at . Judge Colonel Denise Lind makes order to determine the level of damage to US from leak of state secrets to WikiLeaks. (Photograph: Mark Wilson/Getty Images) The judge ruled against a motion filed by defense attorney David Coombs to dismiss all the charges because of what he called the prosecutor's intentional withholding of evidence needed to prepare Manning's defense.

"The court finds no evidence of prosecutorial misconduct," Lind said.

Citing "widespread discovery violations" by military prosecutors, US Army Private and alleged whistleblower Bradley Manning's lead lawyer, David Coombs, on Tuesday asked a military judge to dismiss all government charges against him with prejudice, meaning he could not be recharged in the future.

The request came at a hearing in where Manning is facing a military court martial. The judge in the case, Colonel Denise Lind, will rule on the request today, but Manning's attorney's were handed a small victory when the Lind ordered the prosecution to present "official damage assessments" generated by the government, which are internal documents that analyzed the supposed fallout from the documents and materials Manning is accused of leaking. The judge will review the documents first before deciding whether or not to release them to the defense.

Michael Ratner, director of the Center of Constitutional Rights in New York, wrote a scathing indictment of the secrecy surrounding Manning's trial on Tuesday, describing the hearings he's attended so far as 'theater of the absurd.' He continued: "the trial involves numerous and lengthy off-the-record conferences, out of sight and hearing of the press and public, after which the judge provides an in-court summary that hardly satisfies standards of "open and public". Perhaps more remarkable is the refusal even to provide the defense with a pre-trial publicity order signed by the judge – an order that details what lawyers can and cannot reveal about the case. Yes, even the degree to which proceedings should be kept in secret is a secret, leaving the public and media chained in a Plato's Cave, able only to glimpse the shadows of reality."

Coombs... asked the judge to order the turnover of damage assessments reports created by several federal agencies that examined the problems caused by the release of hundreds of thousands of classified documents by WikiLeaks.

Lind told prosecutors to get those reports from the Defense Intelligence Agency, the CIA, the State Department and the Justice Department and provide them to her so she may review them in private before ruling on whether Manning's attorneys can see them.

The CIA has been granted a delay until May 2 to respond to the request, and the State Department is preparing a document showing why it doesn't have to provide damage assessments under the court's rules.

In the personnel changes, Manning has a new military lawyer working with his civilian defense attorney.

Manning requested Tuesday that the two military attorneys who were assigned to him, Maj. Matthew Kemkes and Capt. Paul Bouchard, be removed and replaced with Capt. Joshua Tooman. No reason was provided.

For months Manning's defence lawyer, David Coombs, has been pressing the soldier's military prosecutors to hand over in the discovery stage of the trial the official damage assessments. The assessments, carried out by several federal agencies including intelligence bodies, could have a crucial bearing on any sentence handed out to Manning should he be found guilty.

There have been suggestions that the assessments show that in the official opinion of the government, WikiLeaks did very little to harm national interests around the world. That could prove invaluable for the defence in mitigation.

Technically, Manning faces a possible death sentence under the charges, one of which accuses him of "aiding the enemy" by acting as the alleged leaker. However, army prosecutors have indicated they will not invoke the death penalty and instead aim for a prison term that could involve life imprisonment.

The judge's demand to see the assessments does not mean that they will be made public. Lind will decide having read them whether or not they should be made available to the defence, and even then they may be classified.

The army prosecutors have consistently resisted any attempt to release the assessments, citing national security. Following the judge's ruling, the state department repeated its insistence that the WikiLeaks trove – including a video of a US helicopter attack on civilians in Iraq and hundreds of thousands of US embassy cables published jointly by the Guardian and other international papers – had been detrimental.

Michael Ratner, Center for Constitutional Rights: The US government's Suppression of All Accountability and Transparency in Prosecuting the WikiLeaks Suspect is Totalitarian

In the two years since his arrest for allegedly leaking the confidential files that exposed grand-scale military misconduct, potential war crimes and questionable diplomatic tactics, army private Bradley Manning has been subjected to an extremely secretive criminal procedure. It is a sad irony that the government's heavy-handed approach to this case only serves to underscore the motivations – some would say, the necessity – for whistleblowing like Manning's in the first place.

...even the degree to which proceedings should be kept in secret is a secret, leaving the public and media chained in a Plato's Cave, able only to glimpse the shadows of reality.

The most well-known of the leaked files, a 39-minute video entitled "Collateral Murder", depicts three brutal attacks on civilians by US soldiers during the course of just one day of the war. The footage, recorded from the cockpit of a US Apache helicopter involved in the attacks, shows the killing of several individuals, including two Reuters journalists, as well as the serious injury of two children. Beyond the chilling images of US soldiers eagerly pleading for chances to shoot, the release of this footage placed a spotlight on the military's blatant mischaracterization of the events, in which a spokesman claimed that there was "no question" that the incident involved engagement with "a hostile force", and underscores the vital role that public scrutiny plays in government accountability.

As an attorney with the Center for Constitutional Rights (CCR) and a legal adviser to WikiLeaks and Julian Assange, I continue to attend Manning's hearings and can only describe them as a theater of the absurd: the trial involves numerous and lengthy off-the-record conferences, out of sight and hearing of the press and public, after which the judge provides an in-court summary that hardly satisfies standards of "open and public". Perhaps more remarkable is the refusal even to provide the defense with a pre-trial publicity order signed by the judge – an order that details what lawyers can and cannot reveal about the case. Yes, even the degree to which proceedings should be kept in secret is a secret, leaving the public and media chained in a Plato's Cave, able only to glimpse the shadows of reality.

The press and advocacy groups, however, have not been quiet about the trampling of their rights. The Reporters Committee for Freedom of the Press, on behalf of 46 news organizations, urged the Department of Defense to take measures that would allow the news media to view documents prior to court arguments. The committee pointed out that the trial for the "alleged leak of the largest amount of classified information in history" is of "intense public interest, particularly where, as here, that person's liberty is at stake". The Center for Constitutional Rights, too, has requested access in the interest of an "open and public" trial, but neither appeal has been answered.