Violence Worsening in Syria in Spite of Pledge, UN Says 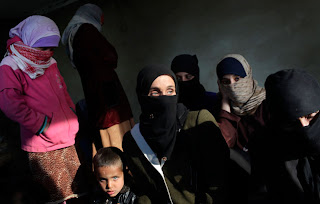 Violence Worsening in in Spite of Pledge, UN Says

Beirut, Lebanon - Spasms of fierce new fighting, some just miles from Syria's capital, were reported on Thursday, and the leader of the United Nations said the conflict was getting worse — contradicting assurances by the Syrian government to a special diplomatic envoy that it was complying with his cease-fire plan.

The violence came as the Security Council issued a statement requesting 's compliance with the plan, particularly its April 10 deadline for a military pullback from major population centers. The statement itself reflected the deep doubts harbored among many nations that President Bashar al-Assad of intends to keep his word.

Mr. Assad, who regards the opposition as terrorist gangs financed by 's enemies, has habitually reneged on previous commitments aimed at halting the 13-month-old uprising against him, now the most chaotic of the Arab Spring democracy revolts.

The Security Council issued the statement as the special diplomatic envoy, Kofi Annan, appointed by the United Nations and Arab League to broker a halt to the Syrian conflict, briefed the General Assembly by videoconference from on his latest diplomatic entreaties to Mr. Assad and the opposition forces aligned against him. Mr. Annan also announced he would travel to — the Syrian government's only remaining significant supporter in the — on April 11.

But the grimness of Mr. Annan's mission was underscored by Ban Ki-moon, the secretary general of the United Nations, who spoke to the General Assembly ahead of the briefing. "Despite the Syrian government's acceptance of the joint special envoy's plan of initial proposals to resolve the crisis, the violence and assaults in civilian areas have not stopped," Mr. Ban said. "The situation on the ground continues to deteriorate."

The latest outbreaks of violence came a day after , the Syrian government's most powerful defender, invited both the Syrian foreign minister and representatives of the opposition to for talks this month and warned foreign sympathizers of armed rebels not to supply them with more weapons.

Activist groups on Thursday reported clashes in the north and south of the country, as Turkish officials spoke of a surge in the number of Syrian refugees fleeing across the border into their country. News reports put the number arriving in on Wednesday at between 800 and 1,000, adding to the 20,000-plus Syrians who have already taken refuge there.

Under the terms of Mr. Annan's plan, the Syrian forces committed to an April 10 deadline to withdraw troops and heavy weapons from major population centers, to be followed by a 48-hour period in which all combatants from both sides would cease all violence.

Mr. Annan's spokesman said in on Thursday that was claiming to have s already begun troop withdrawals in some areas. The spokesman, Ahmad Fawzi, said Syrian officials "have told us they have begun withdrawing troops from certain areas," including Dara'a, Idlib and Zabadani.

"We expect them to continue and to abide by he pledges they have made," Mr. Fawzi told reporters in .

Many Western politicians remained skeptical of Mr. Assad's intentions and the continued fighting seemed to deepen their doubts.

"Can we be optimistic or not?" the French foreign minister, Alain Juppé, said to reporters in . "I am not, because I think Bashar al-Assad is tricking us. He is pretending to accept Kofi Annan's six-point plan while at the same time still using force."

Activist Web sites on Wednesday accused the Syrian military of shelling and shooting at targets mostly in and around the cities of Idlib, and Dara'a, the chronic trouble areas for Mr. Assad. The Syrian Observatory for Human Rights, a London-based exile group with contacts in , said at least 18 people were killed on Wednesday.

On Thursday, the group said government forces attacked several towns across the country, including two — Hraytan and Anadan — near the northern city of , 's largest. More fighting was reported from the suburb of Douma and the southern .

Posted by Max Obuszewski at 7:25 PM