Who's really violent? Tips for controlling the narrative 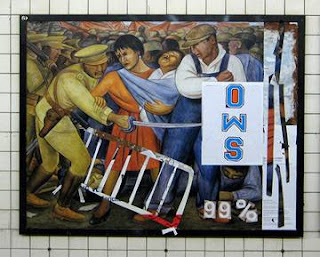 Occupy Wall Street is similar to many movements in contending that its opponent—for Occupy, the 1 percent—is maintaining a system whose structural, systematic violence far exceeds any violence exhibited by the movement itself. For example, movements will say that class oppression or sexism or racism hurt people in the daily course of life, pointing to statistics like each percentage point of unemployment resulting in increased suicide, homicide and domestic abuse. However, especially when the movement is still young and only beginning to get its message out, the powers that be in politics and the media will often succeed in dismissing such charges and in blaming every appearance of violence on the campaigners. Reversing this narrative in the public perception is one of a growing movement’s most important challenges.

For nearly a year, for example, the Syrian government has been sending its tanks to kill demonstrators while claiming that the violence mainly comes from the pro-democracy forces. The Russian government publicly agrees. The reason why defenders of oppression the world over charge activists with violence—even if they have to make it up—is because it’s a potent accusation. The oppressor doesn’t want the “violence” label to stick to its own side. Those who presently are undecided or passive might move to support the campaigners because they don’t want to support “violence.”

In some circumstances, although not all, who wins the struggle depends on who most believably asserts that the other side is violent. Occupy Wall Street got a tremendous boost in the early days when mainstream media were largely ignoring them, thanks to the blatant violence committed by New York City police. Many influential and uncommitted people swung immediately to the side of Occupy and gave it extraordinary momentum.

Those in power, however, are at an advantage in this contest with campaigners. They usually control or hugely influence the media coverage. They start out with some legitimacy won through elections or asserted through authoritarian cultural institutions—often religious ones. In the Global Nonviolent Action Database, we recount dozens of cases in which oppressive regimes have persisted against activist challenge for years, even decades, before the campaigners’ charge of “violence” finally stuck and key middle groups swung over.

After Martin Luther King, Jr. won the Nobel Peace Prize, there was a swell of indignation in many Southern towns and cities. “Our town was peaceful until King came here,” people would say, “and then we had all kinds of trouble and violence, and then he gets the Peace Prize?”

King’s response was to say that those towns had been violent all along. Racism is violence, he said; just look at comparative statistics between whites and blacks of life expectancy, and infant mortality rates, and death in childbirth. He said that the town newspaper didn’t put those statistics in headlines, so (white) people didn’t see clearly the violence of racism. It took an activist campaign that brought out the Ku Klux Klan and police dogs, and blood running in the streets, for people to see that racism equals violence, because racism is a system that, when challenged, must be defended by violence. As we know, once the white people in the middle saw where the violence was actually coming from, large enough portions of them changed sides so that the activists could gain concrete victories.

How, then, did an oppressed people succeed in showing that the violence was actually in white racism, rather than in themselves?

They did it by creating brilliant dramas in which they contrasted their own behavior with that of their opponents. Part of the brilliance was in forcing their opponent into a dilemma in which either choice would put the demonstrators ahead of the game.  The story-line for a lunch-counter sit-in, for instance, was: “I want coffee at this whites-only lunch counter. If you serve me, fine. I win. If you don’t serve me but instead beat me or arrest me, fine. I win because I show where the violence is coming from.” (I was privileged to learn this lesson firsthand; my first arrest was in a civil rights sit-in.)

In other words, at their best, the young people avoided doing what could be perceived as mere provocation—like walking into the streets to stop traffic or hassling shoppers. The students were much cagier than that. They carefully set up no-win situations for their opponents, and therefore, against all odds—including the KKK terrorists—they usually won.

Furthermore, because they knew the stakes were high, the students took steps to heighten the contrast as much as possible. They showed up at the lunch counter with ironed dresses and white shirts and ties and polished shoes, with a textbook in hand.

The danger of such contrast is known well to people whose job is to defend an unjust status quo. When activist behavior reveals so clearly the injustice of the state, it results in a loss of the state’s legitimacy. Dozens of dictators have learned this to their sorrow. Smart managers of repression have therefore come up with a counter-strategy: reduce the contrast in behavior between the activists and those charged with repression. Here are some of their tactics:

Variations of the repressors’ “minimize the contrast” approach have been employed all over the world: provocateurs used in by the British Empire, in to hurt the student opponents of the dictatorship, and on and on. There are steps that activists can take, however, to prevent this kind of manipulation:

The student sit-inners, French war protesters and heroic Omanis remind us that, while enjoying our own creativity, we needn’t re-invent every wheel. We can also learn from sisters and brothers that went before us some ways to heighten the contrast and reveal the violent face of injustice.