Remembering the Context of War Crimes: The Crime of War Itself

Remembering the Context of War Crimes: The Crime of War Itself 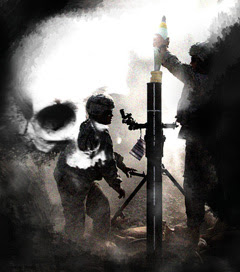 One would think that, by now, would have made the connection between war and atrocity. Or, are we too obsessed with our consumer-driven lifestyles, or too apathetic to even pay attention? Or perhaps we believe the military is a refuge for miscreants and deviants capable of unspeakable acts of cruelty and barbarism.

More likely, I think, confronting the incivility of war, the murders of civilians in Haditha [6]and in Baghdad - the latter documented in the now infamous WikiLeaks "Collateral Murder" video [7]-provides a welcome (though, perhaps, unpleasant and regrettable) opportunity to reassert our commitment to the rule of law and to the dictates of our individual and/or collective consciences.

With an appropriate air of moral ascendancy, the apathetic, the supporters, and the opponents of war find common ground in dutifully judging and appropriately condemning, however reluctantly, those "depraved" individuals who dare tarnish the reputation of this great nation by violating the laws of God and man.

Perhaps I am being a bit unfair in expecting the average American to grasp the nature, reality and consequences of war. War cannot be understood, rationally or intellectually, by watching a film or by reading a book. To "know" war, you have to experience it, live it, feel it in your gut - the anxiety, fear, frustration, boredom, hopelessness, despair, anger, rage, etcetera. In truth, warriors exist in a world totally incomprehensible to those who have never had the misfortune of experiencing the horrors of the battlefield.

To those struggling to survive the next improvised explosive device or suicide bomber, war's negative effects are pervasive and cumulative. Everyday living in a war zone is a netherworld of horror and insanity in which respect for life and for the dignity of humankind loses all meaning. Life amid the violence, death, horror, trauma, anxiety and fatigue of war erodes moral being, undoes character, and reduces decent men and women to savages capable of incredible cruelty that would never have been possible before their having been victimized by and sacrificed to war.

As evidenced by the appalling events in Haditha and , and so many others - including the recent atrocity committed when several Marines urinated on the lifeless bodies of Taliban fighters [8]- warriors are dehumanized and desensitized to death and destruction. Judgments of right and wrong - morality - quickly become irrelevant, and cruelty and brutality become a primal response to an overwhelming threat of annihilation. Consequently, atrocities in such an environment are not isolated, aberrant occurrences prosecuted by a few deviant individuals. Rather, they are commonplace, intrinsic to the nature and the reality of war, the inevitable consequence of enduring prolonged, life-threatening and morally untenable conditions, what psychologist Robert Jay Lifton describes as "atrocity-producing situations." [9]

Having been indoctrinated into the mythology of the "good war" and the "noble warrior," the uninitiated and unaffected, which includes most civilians and many non-warrior members of the military, fail to realize this truth: that all war is barbarism, in which cruelty and brutality - atrocity - is the norm, rather than the exception. During World War II, for example, often cited and celebrated as the "good war," over 50 million civilians were murdered [10] by both the Axis and Allied nations. The Marines who killed the civilians in Haditha and the soldiers who so nonchalantly "engaged the target" in the attack revealed in the WikiLeaks video - slaughtering some 12 human beings - are no different from the pilots and bombardiers from the "greatest generation," who, with equal nonchalance, incinerated millions of civilians - women, children, old people - during the terror bombings of Hamburg, Dresden, Tokyo, Hiroshima, Nagasaki, etcetera.

Despite the moral depravity of their actions, these individuals were not born killers. Rather, they were created to do our bidding, first conscripted or lured into the military with promises of employment, a college education, or citizenship, then subjected to sophisticated indoctrination techniques of values manipulation, moral desensitization, and psychological conditioning, aimed at destroying and overriding both their humanity and their moral aversion to killing. "Born again hard," their warrior behaviors were soon reinforced by the violence and horror of the battlefield environment. Is it any wonder, then, that they became capable of  heinous acts of slaughter such as those in Haditha, in , at My Lai [11], at No Gun Ri [12], and during the terror bombings of European and Japanese cities?

If we are truly concerned with justice, 's moral integrity and the well-being of the troops, we must know that war itself is atrocity. Know, as well, that these young men chose not to be murderers, but patriots willing to make great personal sacrifice on behalf of freedom and the values they held sacred; they are the "children ardent for some desperate glory" convinced of "the old Lie; Dulce et Decorum est Pro patria mori [13]."

Finally, we must see through the mythology, the lies and the deceptions, and understand that all who become tainted by war are victims. Consequently, the culpability of those we are so quick to condemn must be mitigated. While I do not justify or excuse the actions of these individuals, neither do I seek scapegoats in order to absolve myself of culpability and responsibility as a citizen of a democracy in whose name these warriors were created and atrocities committed.

Consequently, if there is to be condemnation and punishment, let it begin with those whose incompetence and rapacious desire for wealth and power make unnecessary war inevitable, whose apathy allows the slaughter to continue, and whose blind allegiance and misguided patriotism hamper their ability to understand and appreciate the true reality and nature of war and its tragic and profound effects upon the warrior.