Burma awakes to glasnost: a (partly) free press and (some) freedom of expression

awakes to glasnost: a (partly) free press and (some) freedom of expression

Pictures of Aung San Suu Kyi adorn T-shirts and her speeches are reported verbatim. In , the censors are in retreat 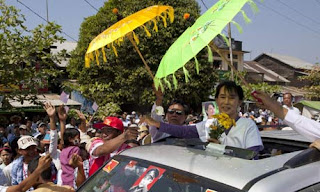 Opposition leader Aung San Suu Kyi on the campaign trail earlier this month in the constituency of Kaw Hmu, which she hopes to represent. Photograph: Paula Bronstein/Getty Images

At Bangon Books, a second-hand shop in the beating heart of , U Htay Hong is doing a brisk trade in Aung San Suu Kyi's collected writings, Freedom from Fear. That well-known "subversive" George Orwell is also prominently displayed, as are weditions of Thant Myint-U's unauthorised history of Burma, The River of Lost Footsteps. "In the old days, these were considered 'dissident' books and I had to keep them hidden in a back room," Hong explains. "Now, the intelligence police no longer seem to care."

And what is true for Bangon Books, it seems, is increasingly true for other media outlets in . For decades, journalists lived in fear of imprisonment and worse. Owning a computer or fax machine without permission was forbidden and access to the internet was strictly controlled. Officially, these restrictions are still in place, but in practice the regime is waiving many censorship rules, ushering in a sort of Burmese "glasnost", the process of opening up after political repression.

The most visible sign of the new freedoms are the ubiquitous images of the National League of Democracy (NLD) leader, Aung San Suu Kyi. During her years under house arrest, it was illegal to publish her photograph. Now, with parliamentary elections looming, T-shirts emblazoned with her image are sold openly on Rangoon street corners and not a week passes without photographs of her on the front pages of privately owned newspapers, such as the Yangon Times and Flower News.

In March, in another "first" for the junta, President Thein Sein's administration is to permit party political broadcasts by Aung San Suu Kyi and other political leaders. Before receiving the final go-ahead, however, the NLD must submit the text of her address to the censors at the Ministry of Information.

And therein lies the catch, for in the looking-glass world of Burmese politics, working out what is and isn't "permitted" is still something of a guessing game. "The line is continually shifting," explained an editorial spokesman for the Myanmar Times, a non-government weekly with dual Burmese and English language editions. "We seem to be able to publish stories that would have been unthinkable a year to six months ago."

However, he explained, it was still a "trial-and-error process. The only way to be sure is to submit the pages and see what gets through."

Every week, two days before publication, the Myanmar Times, along with other private weeklies (only government newspapers are permitted to publish daily), sends its proofs to the Press Scrutiny and Registration Division, a coinage of which Orwell would have been proud. There, some 100 clerks pore over the text, excising paragraphs and, on occasion, whole articles deemed antithetical to the promotion of what – in a classic example of Burmese doublespeak – the regime calls a "discipline-flourishing democracy". In the past, the censors might have excised as many as 10 articles. Now, the red ink runs to an average of just three a week.

Recent editions of the Myanmar Times have featured articles on land reform; the "flawed" 2010 election, which returned a military government despite an NLD majority at the polls; and the long-running conflict in Kachin state, where the regime is accused of human rights violations. The paper has also run editorials calling for greater government "transparency" and the publication of draft legislation to ensure that bills are subjected to public scrutiny.

Some topics are still forbidden, however. For instance, the Myanmar Times was not permitted to report on a recent strike at a Chinese-owned factory. Similarly, in an article on land reform, censors insisted on striking out references to a lawsuit brought against an MP accused of illegal land acquisitions.

Another item that got the red-ink treatment was a quotation from student activist Min Ko Naing, who was only recently released from jail after being imprisoned for his part in the 1988 student protests. In an otherwise inocuous article about plans for a biopic about Suu Kyi's father, the national independence leader Aung San, Naing expressed the hope that the producers would feature the student union building where Aung San spent his formative university days as well as the student union flag. Since the flag is embazoned with a white star and a gold peacock, which is also an symbol for the military, this proved too much for the censors and the reference was deleted.

Other no-go areas are reports of ethnic conflicts and allegations of military forced labour. In addition, the authorities continue to deny journalists access to Kachin and other conflict zones, making it impossible to report independently on claims of abuses there.

After decades of isolation, however, most Burmese are cautiously optimistic that the new freedoms will not prove a flash in the pan and that, with time, the process will become irreversible. The problem is that none of the changes has been codified and there is no guarantee that, should new strikes or protests break out, the junta won't revert to its former bad practices.

That is why many Burmese believe the real test will come later this year, when a new press law comes up for discussion in parliament. According to those who have seen a draft of the bill, it calls for the elimination of the censorship board and its replacement with a press code similar to that of other countries in the region. In another nod to a truly free and independent press, the bill envisages daily publication by private companies.

In an effort to prove that the relaxation of censorship is more than window dressing, the Ministry of Information has been inviting journalists to workshops to help retrain its staff in the art of public communications. But while the country's top censor, Tin Shwe, is said to support the reforms, his boss, Kyaw Hsan, the minister of information, is more hostile, describing journalists as "vicious red ants".

For now, at least, the Burmese seem to be revelling in their glasnost moment. On a election tour to the delta nine days ago, Aung San Suu Kyi was mobbed by supporters waving placards emblazoned with her image. As she took to the stage in support of the local NLD candidate, huge speakers blasted a popular Burmese anthem, giving the rally a carnival feel. With the local and international press looking on, she talked about the importance of "poverty reduction", "social justice" and the "rule of law" – three phrases rarely heard in Burma and almost never in the same sentence.

The following week, the Myanmar Post published Aung San Suu Kyi's picture on its front page next to a detailed report quoting extracts of her speech. The government's official mouthpiece, The New Light of Myanmar, ignored it.

For those in the delta that day, it was an electrifying moment and afterwards I was thronged by supporters eager for me to take their picture – something that would have been inconceivable in the old . "We are so happy," said one. "Please tell the world that we are free."

I promised I would. Only time will tell whether it is true.

awakes to glasnost: a (partly) free press and (some) freedom of expression

Posted by Max Obuszewski at 9:34 PM