US Plans for Perpetual War

US Plans for Perpetual War

As an attack on remains temporarily on the backburner and , home to US-identified terrorist group Hamas, moves up the queue as the next target for military intervention, both are part of a larger strategy proposed to newly-elected Israeli Prime Minister Benjamin Netanyahu in 1996.

The "Clean Break: A New Strategy for Securing the Realm" suggested a "new approach to peace' premised on a 'clean break' from the peace process of the 1990's. would have withdrawn Israeli troops from the occupied territories while affirming 's right of self-determination. Rather than pursuing a 'comprehensive peace' with the Arab world, Clean Break advocated an aggressive pre-emptive military strategy to destabilize and eliminate Saddam Hussein. In addition, Clean Break retained the 'right of hot pursuit' anywhere within the occupied territories and encouraged 'seizing the initiative' by "engaging" , and to trigger ultimate regime change. 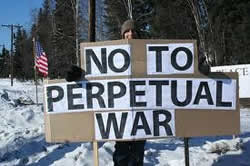 The key authors of that document, American neo-cons Richard Perle, David Wurmser and Douglas Feith (who Gen. Tommy Franks called the 'f... stupidest guy on the face of the earth" i.e. Bob Woodward's Plan of Attack, pg 281), soon found themselves influential national security positions within a receptive Bush Administration from which to proselytize their recommendations.

A decade later, the authors of that study are gone in name but their spirit of unending wars is alive and well within the Obama Administration's recently announced "Defense Strategic Guidance" as part of "Sustaining US Global Leadership: Priorities for 21st Century Defense," Where Clean Break offered what was then a radical Middle East military strategy, Obama's DSG identifies US military priorities for the 21st century to "confront and defeat aggression anywhere in the world" with an emphasis on the and Asia-Pacific region as the "greatest challenges for the future." (Panetta, 1-5-2012)

Even prior to announcement of the DSG, the American military is still pursuing WMD's as combat troops have been deployed to chase local 'terrorists' that pose no threat to the US; such as the Lord's Army in Uganda and escalating a US military presence dispatching 2,500 Marines to Australia to protect US 'national interests' in the South China Sea and Indian Ocean.

Addressing a January 5th news conference at the Pentagon, the president cited 'enduring national interests' as he read a prepared ten minute statement and left the podium without taking any questions; attending reporters remained in their places with bright, shiny faces leaving Defense Secretary Panetta and Joint Chief Martin Dempsey to carry on. With his usual eloquence, the president pledged that the is going to "maintain our military superiority ... ready for the full range of contingencies and threats" and that 'the faces a complex and growing array of security challenges across the globe."

The president's grim pronouncements failed to reassure a US commitment to international law or to provide an analysis to justify a future of perpetual armed conflict and, as both Obama and Panetta postulated the pretense of victory in Iraq, neither acknowledged the 800-pound gorilla in the room that if the systematic destruction of Iraq and Afghanistan as a result of U.S. interventions was an example of providing for a 'safer, more stable, prosperous world,' then perhaps the world would be better off if the United States stayed at home and minded its own business..

In a questionable grip on reality, the president recounted the 'extraordinary' growth of country's military budget since 9/11 as he acknowledged that "global responsibilities demand leadership, the defense budget will still be larger than it was toward the end of the Bush administration." Obama went on to make the prediction that the American people will "accept a defense budget" that 'continues to be larger than roughly the next ten countries combined." As the news networks almost entirely allowed the implications of DSG to slide under the radar neglecting to inform the American public of the president's generosity regarding his new military strategy, the average American taxpayer remains unaware of Obama's future foreign policy objectives and its consequences for social programs that millions of Americans rely on. Nor has the American taxpayer benefited from a presidential explanation of how a budget 'larger than it was' will affect the country's fragile economic stability.

With passage of the Congressional Budget Act of 1974, the Congressional Budget Office (CBO) is required to prepare budget projections for all Federal departments. Those projections are premised on a baseline budget process that predicts future budget increases based on inflation, new programs, increased administrative costs, etc. In a bi-partisan game of smoke and mirrors intent on tricking the taxpayer, it is reductions to this baseline budget projection that the Pentagon is now heralding as 'cuts.' Therefore, the $487 billion in 'cuts' over the next ten years are, in reality, coming out of the projections prepared by the CBO which explains why there are no cuts to any major weapons program.

In addition, with the Pentagon's four-year baseline budget cycle of 2009, 2010, 2011 and 2012 at $515 billion, $533 billion, $549 billion and $531 billion, respectively; for the president and Panetta to claim that the proposed 'baseline' budget for 2013 of $525 billion is a dramatic cut representing significant savings does not meet the straight-face test or their ethical obligation to the country.

Neither the president nor Panetta felt any need to articulate a credible global threat that requires eternal armed vigilance as the country continues to dismantle its People Programs and as its infrastructure continues to crumble -- nor did either provide the American people with a thoughtful rationale for who, why, when, where and how.

In sync with Clean Break's principles, DSG provides a framework for reassuring any nervous Nellies of the US ability to sustain multiple wars simultaneously in multiple global locations as Secretary Panetta suggested "from a land war in South Korea and at the same time, threats in the Strait of Hormuz" (1-5-2012 news conference Q&A).

As DSG transforms the nature of US combat realigning its forces beyond the Mideast, the will "of necessity" rebalance toward the Asia-Pacific region in recognition of the 'growth of 's military power....to avoid causing friction in the region." Recognizing that 'over the long term, China's emergence as a regional power will have the potential to effect the US economy and our security in a variety of ways," refers to more than just the US missing an interest payment on its debt or China knocking on our door to demand payment.

DSG eschews diplomacy as a viable alternative in favor of a military response to international tensions with a reduction in the need for 'boots on the ground' while relying on an increase in a leaner, meaner new generation of remote-powered guilt-free drones, the weapon that Ron Paul suggests are unconstitutional, and more agile, flexible Special Op troops.

After the president's departure, Panetta, once known as a liberal House Democrat from California, began to morph into a gnarl-faced Dr. Strangelove with every utterance of war, enemies, threats, death and destruction as he touted U.S. military dominance and its ability to "decisively prevail in any conflict.'

With the world's largest military force including an incomparable nuclear arsenal and a budget to match, exactly who are we protecting the Homeland from -- and what condition will it be in when they arrive? If al Qaeda's goal was to destroy the country's quality of life, its economic prosperity or its high regard for the First Amendment and civil liberties while creating a second-rate banana republic, they have done a terrific job.

Renee Parsons was a lobbyist for Friends of the Earth in focusing on nuclear energy issues. While at FOE, she was responsible for a TRO that stopped the Dept of Energy from conducting an experimental drilling program at 12 locations along the perimeter of as a possible high-level nuclear waste repository. Her efforts included opposing the Nuclear Waste Policy Act and organizing the coalition that successfully defunded the Clinch River Breeder Reactor. She also served as staff in the U.S. House of Representatives. In 2005, she was elected to the Durango City Council () and served four years as Councilor and Mayor.