Wall Street Fights Back Against Bid to Curb Oil Speculation

Wall Street Fights Back Against Bid to Curb Oil Speculation

A Federal Judge is weighing arguments for and against a deeper regulatory regiment on the oil futures market that stems from Congressional legislation passed in the 2010 Dodd-Frank financial reform bill. 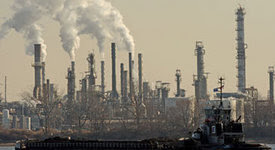 An oil refinery on the . (Michael Bryant/Philadelphia Inquirer/MCT) McClatchy reports on the hearing that took place on Monday where the judge hinted that he "might soon rule in favor of Wall Street and let speculation go unchecked."

Robert Wilkins, a judge on the U.S. District Court for the , declined a request for a preliminary injunction to halt the Commodity Futures Trading Commission from implementing a congressional mandate to limit how many oil contracts any single financial speculator or company can control.

However, Wilkins told both the CFTC and lawyers for the Securities Industry and Financial Markets Association and the International Swap and Derivatives Association that he expected to make a ruling soon on whether to hear the case. His line of questioning left both sides with the impression that he was concerned about how the regulatory agency has proceeded.

The two influential lobbies for Wall Street sought the injunction hoping to thwart what are called “position limits,” which were ordered by Congress as part of the landmark Dodd-Frank Act in 2010. The act was the broadest revamp of financial regulation since the Great Depression. The limits sought to prevent excessive speculation not just in oil but across the broad range of commodities, including farm products and metals.

The McClatchy report also makes note of the high stakes involved in this case by mentioning the financial sector lobbyists had hired Eugene Scalia to make their case. "He’s the son of outspoken conservative Supreme Court Justice Antonin Scalia," they report, "and last year he won a key challenge to a Dodd-Frank rulemaking being carried out by the Securities and Exchange Commission. In that case, the courts struck down provisions that would have made it easier for shareholders to run candidates for corporate boards."

Jonathan Marcus, who argued for the CFTC, said the agency could implement limits for the spot month by June, but the regulator must first finish its swaps definition before it can do so. The final limits for all contract months can only be set a few months after the agency has collected a year's worth of swaps data, a process that is expected to end in August.

The CFTC pinned its support for the new regulations on a 1981 law as well as a requirement from Congress under the 2010 Dodd-Frank law that the agency has argued mandated an expeditious implementation of position limits.

"I think that would frustrate Congress' intent. Clearly Congress wanted limits," said Marcus. He told the court the groups failed to meet the threshold for a preliminary injunction saying "there is no way those numbers rise to irreparable harm."

Marcus said while some members need to spend money to comply with the new rules the costs "are miniscule" for a business that takes in billions of dollars in revenue and that the rules would only affect the biggest traders.

Posted by Max Obuszewski at 8:51 AM