It's a move that's been dismissed as a budget gimmick, but it's also one that could make the supercommittee's job a whole lot easier: counting the savings of withdrawing troops from and . 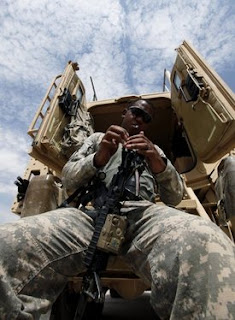 "Exorbitant spending on failed wars that have killed thousands of Americans must not be exempt from budgetary scrutiny," the supercommittee wrote. "Before we ask American families to pitch in more, let's bring our troops home — and, in the process, our tax dollars home." (photo: Reuters/Mohammed Ameen As the 12 lawmakers on the panel begin searching high and low for at least $1.2 trillion in deficit cuts, they are eyeing once-sacrosanct areas like entitlements and weighing huge projects like tax reform.

If that weren't enough, a growing number of members, as well as the White House, are pressuring the supercommittee to "go big" and exceed its statutory target of $1.5 trillion in cuts.

But if the troop withdrawal is factored in, over a trillion dollars in savings is there for the taking, and at least for the time being, supercommittee members are not ruling it out.

"Everything's on the table," supercommittee member Sen. Max Baucus (D-Mont.) said, when asked if such savings should be considered as part of the panel's mission.

In the president's proposal to cut the deficit, a major chunk of the savings in the bill comes from the withdrawal of troops following the "surge." Those savings come about because the Congressional Budget Office (CBO) assumes war spending will stay at the temporary levels of last year for the next 10 years when scoring savings.

The White House says $1.1 trillion will be saved by drawing down those troops from Afghanistan and making the U.S. presence in Iraq a civilian, not a military, one.

Given that the supercommittee must track down at least $1.2 trillion in cuts to avoid the triggering of automatic cuts, simply accounting for those savings would nearly get the panel there all by itself.

But trying to count those savings as significant deficit reduction has come under fire from top Republicans, who argue it is more budget wizardry than real savings, relying on a CBO loophole to pump up deficit-reduction claims.

House Speaker John Boehner (R-Ohio) has dismissed the president's accounting on the matter.

“Do you think it’s fair to take a trillion dollars of less spending on wars and claim it as your own?" he said in a recent interview with Fox Business Network. "We all knew that we were going to spend less in the wars in and the wars in , but nobody really felt like we ought to be taking credit for what was already going to happen."

In July, the House Republican Conference blasted that accounting move as "phantom savings" and "budget deception" when it was included as part of Democrats' proposal to raise the debt ceiling. The conference is headed by Rep. Jeb Hensarling (R-Texas), who also co-chairs the supercommittee.

Hensarling's office did not respond to questions about whether he would oppose counting the withdrawal savings as part of the supercommittee's work.

For now, supercommittee members are reluctant to weigh in on any particular deficit-reduction approach, taking a broad perspective in public as the debate begins.

Baucus’s "Everything's on the table" has become the mantra of the supercommittee as a whole.

With the group just weeks old and in the earliest stages of negotiations, members are loath to begin picking and choosing what is off the table. So everything is on it.

But high-level talks to reduce the deficit have had a poor track record so far in this divided Congress, increasing the pressure on the supercommittee to succeed. In addition to the theatrics of the debt-limit fight, talks led by Vice President Biden fractured down party lines after weeks of work, and Congress came within minutes of a government shutdown earlier in the year.

"Failure is not an option," Senate Minority Leader Mitch McConnell (R-Ky.) said earlier this month. "The committee is structured to succeed."

In fact, counting surge savings is not even enough to satisfy some lawmakers. On Thursday, 70 members of the House, including four Republicans, called on the supercommittee to find even more in military savings by ending the wars in and altogether.

By cutting funding for those wars and winding down the American troop presence there, the lawmakers said the supercommittee could achieve $1.8 trillion in savings over the next decade.

"Exorbitant spending on failed wars that have killed thousands of Americans must not be exempt from budgetary scrutiny," they wrote. "Before we ask American families to pitch in more, let's bring our troops home — and, in the process, our tax dollars home."