You did it! Troy Davis execution delayed while US supreme court considers stay. 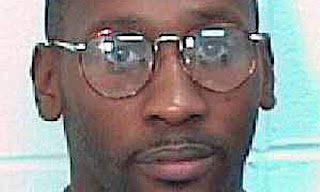 The execution of Troy Davis was delayed temporarily on Wednesday night as the US supreme court considered a last-minute appeal just as he was due to be put to death by lethal injection.

As the first news came in at the prison that houses death row, a huge cheer erupted from a crowd of more than 500 protesters that had amassed on the other side of the road.

's supporters kissed each other and threw placards which read "Not in my name" into the air.

But the jubilation was short-lived. Talk of a reprieve from the supreme court quickly gave way to rumours of a stay, and finally the realisation that the court had only ordered a temporary delay as it considered the matter. The mood then grew more sombre as the waiting game that has now been going on for years with resumed.

Until the delay it seemed almost certain that would be executed. Earlier on Wednesday, Georgia's supreme court had rejected a last-ditch appeal by 's lawyers over the 1989 murder of off-duty policeman Mark MacPhail, for which had been convicted despite overwhelming evidence that the conviction is unreliable.

A superior court judge had also declined to stop the execution.

's attorneys had filed an appeal challenging ballistics evidence linking to the crime, and eyewitness testimony identifying as the killer.

The White House declined to comment on the case, saying: "It is not appropriate for the president of the United States to weigh in on specific cases."

At the maximum security prison in Jackson where the execution was scheduled to take place, busloads of Troy Davis supporters from his home town of Savannah came in to register their anger and despair at what they all agree is the planned judicial killing of an innocent man.

Edward DuBose, a leader of the branch of the NAACP, said it was not an execution, but a "murder".

The protest heard from Martina Correia, 's eldest sister, who delivered a statement from about 20 family members gathered around her. She was heavily critical of what she described as the defiance of the state of and its inability to admit that it had made a mistake.

She pointed out that the state's parole board had vowed in 2007 that no execution would take place if there was any doubt. "Every year there is more and more doubt yet still the state pushes for an execution," she said.

Correia, who has cancer, struggled to her feet in honour of her brother, just a few hours from his probable death. But she exhorted people not to give up.

"if you can get millions of people to stand up against this you can end the death penalty. We shouldn't have to live in a state that executes people when there's doubt."

DuBose gave an account of a 30-minute conversation he had with on death row on Tuesday night. " wanted me to let you know – keep the faith. The fight is bigger than him."

DuBose said that whether the execution went ahead or not, the fight would continue. He said wants his case to set an example "that the death penalty in this country needs to end. They call it execution; we call it murder."

Hundreds of people gathered outside the prison, many wearing T-shirts that said: "I am Troy Davis". The activist Al Sharpton said: "What is facing execution tonight is not just the body of Troy Davis, but the spirit of due justice in the state of ."

Larry Coz, the executive director of Amnesty in the , which has led the international campaign for clemency, said demonstrations were happening outside US embassies in , , , , and the .

"We will not stop fighting until we live in a world where no state thinks it can kill innocent people."

After winning three delays since 2007, lost an appeal for clemency this week when the pardons board denied his request, despite serious doubts about his guilt.

Some witnesses who testified against at trial later recanted, and others who did not testify came forward to say another man did it. But a federal judge dismissed those accounts as "largely smoke and mirrors" after a hearing was granted last year to argue for a new trial, which he did not win.

refused a last meal. He planned to spend his final hours meeting with friends, family and supporters.

has received support from hundreds of thousands of people, including a former FBI director, former president Jimmy Carter and Pope Benedict XVI.

Parliamentarians and government ministers from the Council of Europe, the EU's human rights watchdog, had earlier called for 's sentence to be commuted.

Renate Wohlwend of the council's parliamentary assembly said: "To carry out this irrevocable act now would be a terrible mistake, which could lead to a tragic injustice".

The supreme court gave him an unusual opportunity to prove his innocence last year, but his attorneys failed to convince a judge he did not do it.

State and federal courts have repeatedly upheld his conviction.

Prosecutors have no doubt they charged the right person, and MacPhail's family lobbied the pardons board Monday to reject 's clemency appeal. The board refused to stop the execution a day later.

"He has had ample time to prove his innocence," said MacPhail's widow, Joan MacPhail-Harris. "And he is not innocent."

Spencer Lawton, the district attorney who secured 's conviction in 1991, said he was embarrassed for the judicial system that the execution has taken so long.

"What we have had is a manufactured appearance of doubt which has taken on the quality of legitimate doubt itself. And all of it is exquisitely unfair," said , who retired as 's head prosecutor in 2008.

"The good news is we live in a civilized society where questions like this are decided based on fact in open and transparent courts of law, and not on street corners."

supporters pushed the pardons board to reconsider his case.

They also asked prosecutors to block the execution, although district attorney Larry Chisolm said in a statement he was powerless to withdraw an execution order for issued by a state superior court judge.

"We appreciate the outpouring of interest in this case; however, this matter is beyond our control," Chisolm said.

© 2011 Guardian News and Media Limited or its affiliated companies.