Published on Wednesday, September 28, 2011 by Reuters

Sizes Up Task of Waste Disposal

- faces the prospect of removing and disposing 29 million cubic metres of soil contaminated by the world's worst nuclear crisis in 25 years from an area nearly the size of , the environment ministry said in the first official estimate of the scope and size of the cleanup. 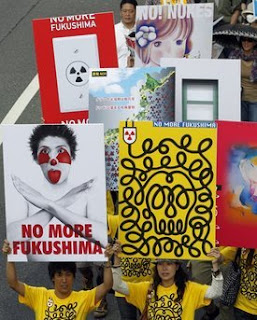 Contaminated zones where radiation levels need to be brought down could top 2,400 square km (930 square miles), sprawling over and four nearby prefectures, the ministry said in a report released on Tuesday.

The environment ministry has requested an additional 450 billion yen in a third extra budget for the year to next March that the government aims to submit to parliament in October, Kyodo news agency reported.

The government has so far raised 220 billion yen ($2.9 billion) to be used for decontamination work, but some experts say the cleanup bill cost reach trillions of yen .

This would be is enough to fill 23 baseball stadiums with a capacity of 55,000 spectators, and the government must decide where to temporarily store such waste and how to dispose of it permanently.

has banned people from entering within a 20 km (12 mile) radius of the plant, located about 240 km (150 miles) northeast of and owned by Tokyo Electric Power Co . Some 80,000 people were forced to evacuate.

The government aims to halve radiation over two years in places contaminated by the crisis, relying on both the natural drop in radiation as time passes and by human efforts.

The ministry's estimate assumes that cleanup efforts should be mainly in areas where people could be exposed to radiation of 5 millisieverts (mSv) or more annually, excluding exposure from natural sources.

The unit sievert quantifies the amount of radiation absorbed by human tissues and a mSv is one-thousandth of a sievert. Radiation exposure from natural sources in a year is about 2.4 mSv on average, the U.N. atomic watchdog said. ($1 = 76.655 Japanese yen)