Some of you might remember Lisa Savage as she spoke in in the de Paul parking lot before we marched in June to the hotel hosting the Conference of Mayors.  Eventually the mayors voted in favor of an anti-war resolution, the first since the Vietnam War.

Why I Heckled Tony Blair, War Criminal, at Graduation

If you woke on a beautiful spring Sunday in May on a pond in , what would you do? A canoe ride on water as smooth as glass, and breakfast on the deck, perhaps -- followed by disrupting international war criminal Tony Blair at Colby College graduation in Waterville! 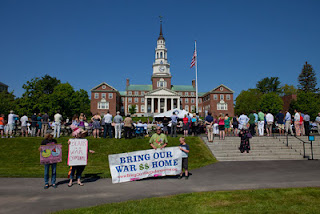 Who knew our protest would lead news coverage of the ceremony? (Washington Post, WGME, Houston Chronicle, and Daily Mail, to name a few.) 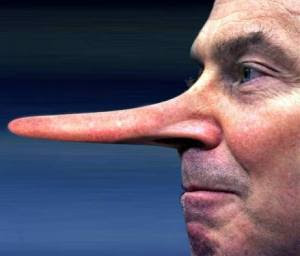 With the BLAIR IS A WAR CRIMINAL sign I scrawled hastily in pink lipstick, we approached the back row of the outdoor ceremony where the former British PM, who lied about WMDs in and has the blood on his hands of thousands of innocent civilians, was to speak.

Before we even made it off the street we were approached by a man from who said, "Thank you for being here. I was disgusted that Colby would invite such a slimy speaker for graduation this year." (More of the disgusted were heard from in Op-Ed News and the local newspapers.)

As we stood holding our signs and quietly listening to graduates give a prayer and then a speech, we were approached by security guards who told us to keep quiet or else we'd be asked to leave. 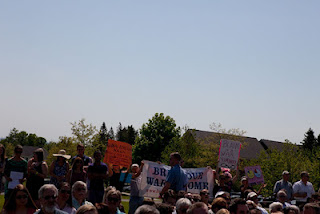 When the introduction for Blair began I waited for a pause and then called out "Tony Blair is a war criminal! He should be arrested. He lied us into war in . He's a war criminal!"

Just then I was grabbed by my arm and turned to find myself staring into the badge of 's Chief of Police Joe Massey, who told me I had to leave. I told him he really shouldn't have his hands on me, and wriggled free. A couple of Colby security guards and a few more uniformed police scurried up and the guards said they had warned us that we had to be quiet to stay. We were now told if we didn't leave we'd be arrested, so my husband and I decided to go back to our car.

Ridgely Fuller stayed behind to call out "War Criminal!" once again as Blair approached the podium. She, too, was asked to leave. She carried a Draw-a-thon image by artist Brian Reeves: 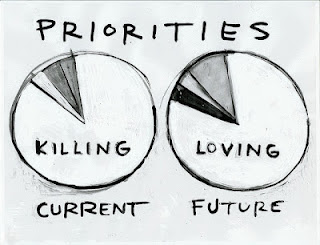 Because both of us had CODEPINK on our sign and banner, the Associated Press report picked up this nugget, ostensibly a quote from police (which I very much doubt):

Lawrence Reichard stayed behind to call out "warmonger" and more, and when he refused to leave, was arrested. We know from Occupy Bangor, and I've seldom seen a happier mug shot than the one of him released by the Waterville Police Department and carried by news outlets in the and the : 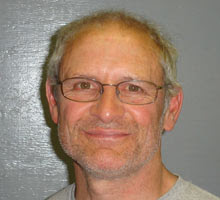 As we walked back to our car our escort had dwindled to two Colby security guards. I asked one of them if he supported what had been done in , killing thousands or maybe even a million women, children, and other civilians.

He said he didn't have any opinion about that. "I'm just doing my job," he told me.

I said that was the defense used by German soldiers during the trials of Nazis after the war, that they were just doing their job. I asked him if he ever studied history and he said no, so I suggested he might want to look up the trials sometime.

As he gave us our final warning that we'd be arrested if we tried to come back,  it was just as Ridgely caught up to us. I told him, "We are civil disobedients. We've been arrested before, like at the White House."

His eyes lit up. "Really? You mean the one just the other day?"

Another thing that made me think he was kind of sympathetic to our side was when I had asked my husband, "Why do you think Colby chose such a creepy speaker for their commencement?" the young security guard commented, "Yeah, Bates [another Maine college] got Robert DeNiro." 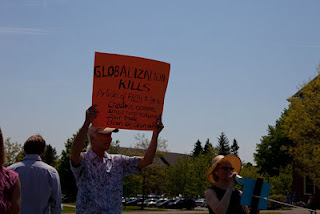 As we left the campus I saw an acquaintance who works at Colby, in a pretty dress, standing obediently off to one side.

I feel that the passivity and complicity of US citizens in the dirty dealings of NATO and its member nations, blindly paying federal taxes every year to fund the slaughter of innocents, afraid to protest, afraid to rock the boat for fear of job loss or being seen as impolite, is actually the biggest threat to global security.

And that's why, as my compatriots were protesting the disgusting spectacle of the NATO summit in Chicago this weekend, I disrupted 's graduation ceremony. 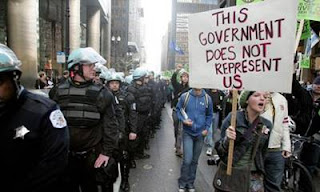 Posted by Max Obuszewski at 9:00 AM