In an interview with the Guardian, Manning's aunt describes her nephew's life in jail – and how he's been able to stay optimistic 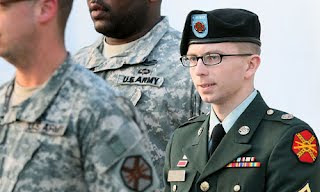 Bradley Manning's aunt said he keeps up to date with subscriptions to Scientific American, the New Yorker and the Washington Post. Photograph: Mark Wilson/Getty Images

Two years into his military confinement for allegedly being the source of the biggest leak of state secrets in US history, Bradley Manning is keeping himself in a relatively positive state of mind, buoyed by trust in his lawyers and the support of close family and backers from around the world.

With a full court-martial scheduled for September, which could result in the soldier spending the rest of his life in military jail, Manning appears to be in surprisingly good humour. His aunt, who visits him frequently in the military brig, told the Guardian that his mood had improved substantially along with his conditions. "He seems to be in good spirits, and quite optimistic about his case – he's not letting anything get him down as far as I can tell," she said.

The intelligence analyst, who was arrested two years ago this week at the Forward Operating Base Hammer outside Baghdad, spends his days reading, exercising or watching television with other military inmates of the brig at Fort Leavenworth, Kansas, and an institution at an undisclosed location in the Washington area where his aunt visits him.

As told by his aunt, who asked not to be named to avoid media attention, Manning comes across as a quiet, bookish individual with interests in the interface between science and philosophy, as well as world affairs. He has subscriptions to Scientific American, the New Yorker and Vanity Fair and has requested a daily copy of the Post.

He borrows regularly from the relatively well-stocked library at , supplemented by gifts from his aunt who has given him copies of Immanuel Kant and Isaac Newton. On a more popular note, his father Brian Manning has sent him the best-selling Swedish thriller Girl With The Dragon Tattoo, though it's not clear whether Manning has read it.

"He doesn't ask for any popular books," his aunt said.

Manning also follows the news avidly, both internationally and domestically. "When I'm talking to him, he'll often mention something political that's going on around the world; he's definitely keeping up with what's going on," said the aunt.

At face value Manning's predicament appears serious. He is charged with 22 counts relating to the transfer of some 700,000 secret documents from US secure computers to WikiLeaks.

The charges include aiding the enemy, wrongfully causing intelligence to be published on the internet knowing that it is accessible to the enemy, theft of public records and computer fraud.

Attempts by his lawyers to have many of the counts dismissed have so far failed and the military prosecutors are pursuing the case against him aggressively.

The nadir in his treatment over the past two years came in early 2011 when, over a period of weeks, he was held in isolation at marine base in . During that time he was stripped naked at night and forced to stand for hours on end.

He protested about the treatment, which was later classified as a form of torture by the UN special rapporteur. Amnesty International recently cited Manning's regime at in its annual human rights report.

Yet the soldier's treatment has improved dramatically and with it his spirits. He was moved to in April 2011, where he is afforded much more contact with other inmates and more privileges, including exercise on the basketball court.

"The situation in is night and day compared to ," his aunt said. "He has freedom of movement and access to books and TV."

The other reason for his relatively cheerful state is that he has total faith in his defence team. "Bradley has tremendous confidence in David Coombs," she said, referring to his lead civilian lawyer. "He seems pretty optimistic about how things are going and encouraged that the case is now moving along."

Manning and Coombs speak at least once a week, and spend hours together discussing legal strategy when the soldier is brought to the Washington area ahead of pre-trial hearings in Fort Meade, Maryland. The next hearing will be on 6 June.

Occasionally, Manning expresses discouragement at what he sees as the lack of co-operation he is getting from the government. This has become a cause of contention with the defence, which has complained in a series of motions lodged with the military court that the army has failed to meet its constitutional obligations to allow Manning a fair trial.

The other explanation for Manning's relatively bouyant mood is the support he receives from his immediate family in and where his mother and another aunt live, as well as his support network and concerned individuals around the world. Several public figures spoke about Manning on the second anniversary of his military custody.

Graham Nash, the songwriter with the band Crosby, Stills, Nash & Young, said that "this is supposed to be a nation of laws. If so, why are we torturing a man who truly believed that he was doing his duty to his country and to his own soul?"

The Labour MP Ann Clwyd, who has been closely involved with the private's Welsh family, said: "It is an outrage that Bradley Manning is still being held two years after he was first arrested. He should not be made the scapegoat for the errors of the military."

Writing in the Guardian, Birgitta Jonsdottir, a member of 's parliament who has been a vocal advocate for WikiLeaks, likened the stance of the government to 's "oppression, secrecy and fear mongering".

Similar sentiments are contained in Manning's bulging mail bag. His aunt said the soldier receives many letters each week from around the world.

He is also very aware how closely the media is watching his case. After his first pre-trial hearing in in December, he remarked: "Gee, I was twiddling with my pen, and the papers wrote about it!"

He feels a little self-conscious about being in the spotlight, but hugely thankful none the less. "He feels good that people haven't forgotten him," she said.

Posted by Max Obuszewski at 4:55 PM