President Obama, who ran for the nation's highest office on a promise to close Guantanamo and end the war in Iraq, has now become a president who personally oversees a covert assassination program that allows a small group of top US officials to monitor, select, and mark for death those it alone deems a threat to national security. 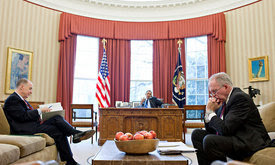 President Obama in the Oval Office with Thomas E. Donilon, left, the national security adviser, and John O. Brennan, his top counterterrorism adviser. (Pete Souza/The White House) A new report in the New York Times, based on interviews with three dozen of his current and former advisers, says that when Obama - often chided as a 'liberal constitutional professor' -- "applies his lawyering skills to counterterrorism, it is usually to enable, not constrain, his ferocious campaign against Al Qaeda — even when it comes to killing an American cleric in Yemen, a decision that Mr. Obama told colleagues was 'an easy one.'"

Obama's enthusiasm for the program, however, has already shown consequences. As the Times notes: "Drones have replaced Guantánamo as the recruiting tool of choice for militants; in his 2010 guilty plea, Faisal Shahzad, who had tried to set off a car bomb in Times Square, justified targeting civilians by telling the judge, 'When the drones hit, they don’t see children.'"

One official quoted in the article also called into question the administration's method for tabulating civilian casualties in drone attacks, saying that the CIA's recent claim that the number of civilians killed in drone strikes in was in the "single digits" was unrealistic.

“It bothers me when they say there were seven guys, so they must all be militants,” the official said. “They count the corpses and they’re not really sure who they are.”

And, when the fact that targeted killings are on the rise as the capture of alleged Al-Qaeda militants is now rarely seen, one creeping suspicion lurks for many. Has the Obama administration "avoided the complications of detention by deciding, in effect, to take no prisoners alive?"

“Their policy is to take out high-value targets, versus capturing high-value targets,” said Senator Saxby Chambliss of Georgia, the top Republican on the intelligence committee. “They are not going to advertise that, but that’s what they are doing.”

The New York Times: Secret ‘Kill List’ Proves a Test of Obama’s Principles and Will

Mr. Obama is the liberal law professor who campaigned against the war and torture, and then insisted on approving every new name on an expanding “kill list,” poring over terrorist suspects’ biographies on what one official calls the macabre “baseball cards” of an unconventional war. When a rare opportunity for a drone strike at a top terrorist arises — but his family is with him — it is the president who has reserved to himself the final moral calculation.

“He is determined that he will make these decisions about how far and wide these operations will go,” said Thomas E. Donilon, his national security adviser. “His view is that he’s responsible for the position of the in the world.” He added, “He’s determined to keep the tether pretty short.”

Nothing else in Mr. Obama’s first term has baffled liberal supporters and confounded conservative critics alike as his aggressive counterterrorism record. His actions have often remained inscrutable, obscured by awkward secrecy rules, polarized political commentary and the president’s own deep reserve.

In interviews with The New York Times, three dozen of his current and former advisers described Mr. Obama’s evolution since taking on the role, without precedent in presidential history, of personally overseeing the shadow war with Al Qaeda.

They describe a paradoxical leader who shunned the legislative deal-making required to close the detention facility at in , but approves lethal action without hand-wringing. While he was adamant about narrowing the fight and improving relations with the Muslim world, he has followed the metastasizing enemy into new and dangerous lands. When he applies his lawyering skills to counterterrorism, it is usually to enable, not constrain, his ferocious campaign against Al Qaeda — even when it comes to killing an American cleric in , a decision that Mr. Obama told colleagues was “an easy one.”