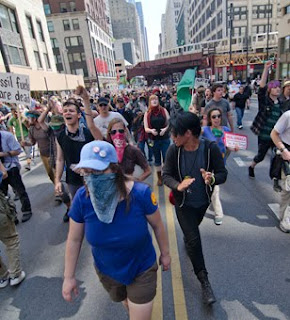 Much of the recent news on the legal front has provided the Occupy movement with bursts of momentum. The first victory was the acquittal of Alexander Arbuckle, an NYU student arrested in January (ironically while completing a photojournalism project aimed at exploring the NYPD’s side of an protest). Charged with disorderly conduct for standing in the middle of the street and blocking traffic, Arbuckle was vindicated by considerable photographic and video evidence showing that it was police, not protesters, blocking traffic. The protesters, including Arbuckle, are shown to have remained on the sidewalk.

Two days later, a similar ruling came down in favor of OWS protester Jessica Hall, who was arrested on November 17th at the intersection of William and Pine streets– the same day and location of my arrest. Like Arbuckle, Hall was accused of obstructing traffic, and like Arbuckle, Hall’s case was made for her by video documentation, including the NYPD’s own, showing that traffic was blocked by the police. “The police arrested people willy-nilly without any determination that they had actually committed the offenses that they were charged with,” one of Hall’s attorneys, Marty Stolar, told The Village Voice’s Nick Pinto. “That's what tends to criminalize protest activity.”

At the same time, Obama-appointed judge Katherine Forrest handed down what may be a landmark decision finding two controversial indefinite detention sections of the National Defense Authorization Act facially unconstitutional and serving injunctions against President Barack Obama, Attorney General Eric Holder and others’ enforcement of the provisions. The decision surprised not only me, who watched some of the testimony in the courtroom, but also legal observers as keen as Salon’s Glenn Greenwald, who called the decision a “sweeping victory for the plaintiffs.”

“People have acknowledged that Occupy changed the conversation, said Andy Stepanian, a publicist handing press relations for the plaintiffs, “but now they’re actually changing law.” Stepanian called the grassroots protest organized through Occupy Wall Street working groups critical to the outcome of the trial, brought by, among others, OWS supporter Chris Hedges, Occupy London organizer Kai Wargalla and Alexa O’Brien of Day of Rage. Full disclosure: Truthout is mentioned in the judge’s decision for having uncovered documents admitted in the trial.

As encouraging as these developments are, an episode unfolding here in at the anti-NATO protests severely mitigates the momentum they provide. Three activists – Bryan Church, Jarred Chase, Brent Betterly – have been charged with “possession of incendiary or explosive device, conspiracy to commit terrorism & providing material support for terrorism,” which seems to mean “beer-making equipment”. The “NATO 3” were among nine activist abducted by police in a nighttime raid and disappeared for a number of hours. “We've called police officials at every level trying to find out where they were being held. We were denied any information at all about any people being arrested, let alone a raid happening last night. So essentially these people were disappeared for more than 12 hours until we could finally locate them,” said National Lawyers Guild spokesman Kris Hermes. Lawyers from the NLG met with the arrestees and reported that they were “low spirits, confused about why they were arrested and shackled at both their hands and feet at the meeting.”

The three activists charged with terrorism-related crimes had previously posted a video of Chicago Police intimidating and threatening them with physical violence while they searched the protesters’ vehicle. The Occupy Chicago Twitter feed commented, “Police are retaliating by charging these men with serious terrorism charges because they posted the video and it spread.” The activists’ NLG attorney Sarah Glesomino declared “Charging these people who are here to peacefully protest against NATO for terrorism when in reality the police have been terrorizing activists in is completely outrageous.”

Jeff Smith, an Occupy Wall Street protester, told Truthout, “I fully expect them to put an OWS person in jail to try and scare people,” but added that this looked to him like “a ******** charge.” Be that as it may, American laws regarding terrorism cases have grown to endow the government with considerable advantages in the decade since 9/11, posing a dark specter for Occupy Wall Street activists. Political prisoners, from anarchists in the late 19th Century to communists during the Red Scare to Black Panthers to a host of other dissident movements, are a staple of American history. Will we see Occupy’s first political prisoners in the coming weeks and months?

This article may not be republished without permission from Truthout.

J.A. Myerson is a reporter for Truthout and Citizen Radio. He is writing a book on 2011, to be published in Spring 2012.

Posted by Max Obuszewski at 1:07 AM