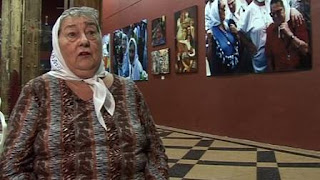 Mothers of Plaza de Mayo: 'They put us in cells with corpses'

Argentina marks its dark past

"I'm going out for a moment. Be right back."

Those were the last words "Taty" Uranga Almeida heard from her son, Alejandro.

She not only never saw him again, but has never found out what happened to him.

He became one of the "disappeared", the term used in for those killed during the political violence in the country between the 1970s and early 1980s.

Human rights groups estimate that more than 30,000 people were kidnapped and murdered during this time by extremist right-wing groups or the military government that seized power in a coup in 1976.

“We thought our sons had been imprisoned and kept in solitary confinement, but were surely alive”

Most of the victims' remains have never been found.

One of the most important organisations of relatives of the "disappeared" is the Mothers of the Plaza de Mayo, which on 30 April marks 35 years of existence.

Every Thursday since 1977, the mothers have walked around the Plazo de Mayo, the central square near the government palace in .

With their white headscarves, the group has, over the years, become known around the world.

"It was a woman I knew, whose son was in prison, who told me...that some mothers of political detainees were going to the Plazo de Mayo...to ask the authorities for information on the whereabouts of their children," says Hebe de Bonafini, president and co-founder of the Mothers of the Plazo de Mayo. 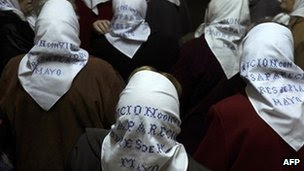 The main differences were ideological. Ms de Bonafini's group was against receiving state compensation of $275,000 for each disappeared child.

"You cannot put a price on life. Also, to accept this compensation you have to sign a death certificate saying when your child died. I cannot sign this as it is the people who took them who know, not me," she says.

They also reject the forensic work to identify the remains. They want efforts concentrated on bringing those who committed the crimes to justice.

But Ms Almeida does not agree. "I respect Ms de Bonafini's opinion, but I need closure. I would like to touch Alejandro's bones before I die."

It was April 1977, a year since the military had launched a fierce wave of repression against left-wing activists and people accused of collaborating with them.

"We went to the square that Thursday with the intention of handing over a letter to (military ruler Jorge) Videla.

"I remember there was a small group of mothers, some were terrified. Many of us came from small towns outside the city. Some, like me, hadn't even finished primary school. Others couldn't even read or write," she says.

Their inquiries were met with silence. Officials would refuse to meet them or tell them where their children were.

At the time, Ms Almeida says, the concept of "the disappeared" was unknown.

"We thought our sons had been imprisoned and kept in solitary confinement, but were surely alive."

That Thursday, 30 April 1977, a small group of mothers had assembled on the square by mid-afternoon.

The authorities had forbidden public gatherings of more than three people, so the police immediately approached them to demand they clear the place.

"But, by absolute chance, in response we started grabbing each other in pairs, arm to arm, and started walking in circles around the square. There was nothing illegal about that," says Ms de Bonafini, now 83.

It was the first act of a movement that would slowly raise international awareness of one of the most brutal episodes of state-sponsored repression in .

"Every week the numbers of mothers, sadly, grew, as there were more and more people taken away by the security forces,"says Ms Almeida.

By the end of 1977, the government tried to stop the Mothers from gaining more recognition, especially outside . The 1976-1983 military dictatorship brought an era of repression for

Three of the founding members of the Mothers were detained by the security services, along with two French nuns and several other activists.

They were taken to a military detention centre, tortured, and then thrown - presumably alive - from a plane into the sea.

Bodies, including those of the three Mothers, washed up on shore days later and were buried in an unmarked common grave.

In 2003, their remains, and cause of death, were identified by the members of the Argentine Forensic Anthropology Team.

Few Mothers turned up at the square the week following the abductions.

Those who did were met by police with dogs and batons, says Ms de Bonafini.

"We had to start all over again, going house to house to talk to the mothers of detainees. We had to rally them again," she adds.

Ms de Bonafini's own struggle intensified. Her second son was seized by the security services. Her daughter-in-law would also be arrested months later.

She never saw any of them again.

"I don't remember being afraid. Maybe I was just thoughtless. But it is the same mentality I had when I gave birth to my children. You don't think about the pain, you only want them to be ok."

The police would occasionally arrest the Mothers for brief periods of time. Some were even beaten but they carried on their campaign. 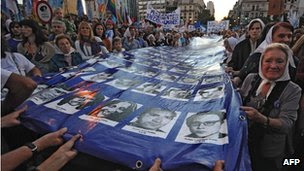 The mothers' numbers are dwindling but their fight goes on

"They touched the most sacred thing a woman can lose, a son. I was 45 years old when they took Alejandro. I'm almost 80 now and I don't know what happened to him. I've been waiting all this time," says Ms Almeida.

"Of course we know they are dead, but politically they are still 'disappeared-detainees' until those who did this tell us what they did with them."

Hundreds of former military officials have been convicted for their role in the abductions, but few have given any indication of where the bodies were taken.

Most of what is known today is due to the Forensic Anthropology Team, which carries out a laboriously slow task of digging up known graves and identifying remains.

Not many Mothers who started this movement still survive. And many of those who are alive face constants health issues because of their age.

But those who can walk still march every Thursday as the Mothers have done for 35 years.

"I wish we'd never existed, as it was the disappearance of our children that brought us together," says Ms Almeida.