Military's delay in searching through files and handing them over is denying Manning a fair trial, defence attorney argues 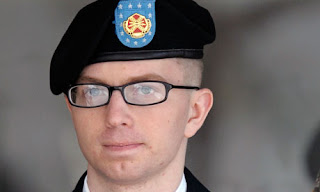 Bradley Manning has been in custody since May 2010, and his trial is due to start in September. Photograph: Cliff Owen/AP

Bradley Manning, the soldier accused of being behind the biggest leak of state secrets in US history, is being denied a fair trial because the army is withholding from him crucial information that might prove his innocence or reduce his sentence, his defence team is arguing.

With Manning's court-martial approaching in September, his legal team has released details of what they claim is a shocking lack of diligence on the part of the military prosecutors in affording him his basic constitutional rights.

The stakes are high, with Manning facing possible life imprisonment for a raft of charges that include "aiding the enemy".

Manning's main civilian lawyer, David Coombs, has filed a motion with the military court in , that sets out a catalogue of delays and inconsistencies in the army's handling of the case.

In particular, he claims the government has failed to disclose key evidence that could help Manning defend himself against the charges.

Almost two years after Manning was arrested, the military has not yet completed a search even of its own files to see if there is any material beneficial to the defence – as it is legally obliged to do.

"That the government cannot get its ducks in a row with respect to discovery which is clearly under its control does not inspire confidence," Coombs writes.

Manning faces 22 charges relating to the transfer of a massive trove of state secrets from military computers to the whistle-blowing website WikiLeaks.

He was arrested in May 2010 in a military base outside , where he was working as an intelligence analyst, and has been in custody ever since.

Material from the trove was published by the Guardian and an alliance of other international newspapers.

The leaks included video footage of a helicopter attack on a group of civilians in , war logs from and and hundreds of thousands of secret embassy cables from around the world.

Disclosure by the prosecution of information that could be useful to the defence – known as "Brady materials" – has been a cornerstone of American criminal law since the supreme court laid down a ruling making it obligatory in 1963.

The rule applies equally to civilian and military prosecutors, under the 14th amendment of the constitution.

Yet Coombs describes an astonishing lack of diligence on the part of the military authorities to meet its obligations. Coombs writes that he has just learned that it took army prosecutors more than a year even to start the process of searching for Brady materials.

Manning was first charged as the WikiLeaks suspect on 5 July 2010, but it was not until 29 July 2011 that the government sent out a memo to relevant army officials asking them to search for and keep information that should be disclosed to defence lawyers.

On top of that unexplained delay, the army then discovered on 17 April 2012 – fully nine months after the request went out and 21 months after Manning was charged – that absolutely no action had been taken by any of those officials.

Coombs said his discovery had exposed the government's "utter lack of diligence in undertaking its Brady search. Why would the government wait until over a year after preferral of charges to begin its search for Brady materials? How could the government not have noticed that for nine months, it had not received any material from any principal officials in the army? If the government cannot even search its own files properly, how can we believe them when they say they have diligently searched the files of other organisations?"

The defence motion itemises some of the information that it believes is in the possession of government bodies, from the army itself to the FBI, department of justice, state department and various intelligence agencies. In total, 12 government departments are listed by the defence.

Specifically, Coombs complains that he has been withheld any assessments compiled by heads of US embassies and missions around the world regarding the overall impact of the WikiLeaks releases.

He also wants to see the output of a working group of senior officials set up within the state department that reviewed the potential risks to individuals from the WikiLeaks disclosures, as well as reports made by the same department to Congress concerning the impact of WikiLeaks and the steps taken to mitigate the fall-out.

"To allow the government to restrict the defence's access to this information," Coombs concludes, "is to provide the government with an unfair tactical advantage that will likely prejudice Manning's right to a fair trial."