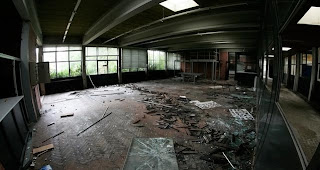 Last week, the city of 's school system announced that it expects to close 40 public schools next year and 64 schools by 2017. The school district expects to lose 40 percent of its current enrollment and thousands of experienced, qualified teachers.

But corporate media in other cities made no mention of these massive school closings - nor of those in , or . Even in the media, the voices of the parents, students and teachers who will suffer were omitted from most accounts.

It's all about balancing the budgets of cities that have lost revenues from the economic downturn. Supposedly, there is simply no money for the luxury of providing an education for the people.

Where will those children find an education? Where will the teachers find work? Almost certainly in an explosion of private sector "charter schools," where the quality of education - from the curriculum to books to the food served at lunch - will be sacrificed to the lowest bidder, and teachers' salaries and benefits will be sacrificed to the profits of the new private owners, who will also eat up many millions of dollars of taxpayer subsidies.

Why does there always seem to be enough money for military expansion, prisons, bank bailouts and tax cuts for the wealthy, but not enough for education - or for jobs, housing, health care, or old age pensions? These are not "welfare," but are part of the social contract for which we pay taxes and make Social Security payments.

In an article reprinted on Truthout on May 10 titled "Why Isn't Closing 40 Philadelphia Public Schools National News?" Bruce Dixon posed this answer:

The city has a lot of poor and black children. Our ruling classes don't want to invest in educating these young people, preferring instead to track into lifetimes of insecure, low-wage labor and/or prison. Our elites don't need a populace educated in critical thinking. So low-cost holding tanks that deliver standardized lessons and tests, via computer if possible, operated by profit-making "educational entrepreneurs" are the way to go.

"Lifetimes of insecure, low-wage labor or prison" - this is very close to the "indentured servitude" that was abolished along with slavery by the 13th Amendment to the Constitution, ratified in 1865. The freed slaves are being recaptured by debt, beginning with the debt of school loans, followed by credit card debt, mortgage debt and health care costs.

As was cynically observed in a document called the "Hazard Circular," allegedly circulated by British banking interests among their American banking counterparts in July 1862:

[S]lavery is but the owning of labor and carries with it the care of the laborers, while the European plan, led by England, is that capital shall control labor by controlling wages. This can be done by controlling the money. The great debt that capitalists will see to it is made out of the war, must be used as a means to control the volume of money.... It will not do to allow the greenback, as it is called, to circulate as money any length of time, as we cannot control that. [Quoted in Charles Lindburgh, "Banking and Currency and the Money Trust" (Washington, DC: National Capital Press, 1913), page 102.]

The quotation may be apocryphal, but it graphically conveys the fate of our burgeoning indentured class. It also suggests the way out: we must recapture the control of our money and banking systems, including the issuance of debt-free money ("greenbacks") by the government.

Meanwhile, in Other Unreported News ...

That alternative vision was put before a conference in in late April that drew delegates from all over the . The theme of the first Public Banking in America Conference, held at the Quaker Friends Center on April 28-29, was that to fix the economy, we first need to take back the "money power" - the power to create currency and credit.

Led by keynote speakers Gar Alperovitz and Hazel Henderson and highlighted in an electric speech by twelve-year-old Victoria Grant, the conference was all about solutions. As summarized by OpEdNews Editor Josh Mitteldorf:

There were two visions expressed .... The first is the very practical idea that states and cities around could be rescued from insolvency if they had their own banks, instead of relying on commercial banks to borrow money through bonds. Tax-exempt bond issues supply money to states and municipal governments typically at 5 or 6% interest, while banks these days are able to borrow from the Fed at 1/4% per year.

The second vision is ... the radically-subversive idea that the system we have for introducing money into the economy is a boon for the banks, but perhaps a major drag on our economy. Perhaps a simple, direct system of money creation by the Treasury Dept instead of the Fed would put an end to cycles of recession and create a foundation for long-term prosperity.

Banking is a huge leech on our economy. 40% of every dollar we spend on goods and services - 40% of all that we create and all we consume - is siphoned off the top as bank interest in one form or another. (Calculations of Margrit Kennedy) The Government is in the absurd position of paying interest to a private bank for every dollar that is put into circulation. The Federal Reserve system has privatized the power to create money, which, according to the Constitution, ought to belong to Congress alone. Presently, interest on the national debt costs the Federal government $500 billion in 2011 and (because of structural deficit spending) it is the fastest-growing portion of the Federal budget.

Five hundred billion dollars could be saved annually just by refinancing the federal debt through our own central bank, interest-free. This is not an off-the-wall idea, but has actually been done, very successfully. Among other instances, it was done in from 1939 to 1974, as was detailed by the youngest and oldest speakers at the conference, 12-year-old Grant and former Defense Minister Paul Hellyer, founder of the Canadian Action Party. Another Canadian at the conference, Councilor Kristyn Wong-Tam, has proposed that the city council could improve its finances by forming its own bank.

The direct solution to the economic crisis, urged by veteran money reformer Bill Still, would be for the federal government to simply create the money it needs, as the American colonists did by printing paper scrip and Abraham Lincoln did by printing greenbacks.

But cities and states don't need to wait for a deadlocked federal Congress to act. As Wong-Tam has proposed for , they can divest their public revenues from the too-big-to-fail banks and put them in their own publicly owned banks. These banks could then do what all banks do: leverage capital, backed by deposits, into money in the form of bank credit.

This newly created bank money would then be available for the use of the local government interest-free (since the government would own the bank and would get the interest back as dividends). Among other possibilities, the money could be used to restore the schools. This would not be an expenditure, but an investment, as illustrated by the GI Bill, which provided education and low-interest loans for returning servicemen after World War II. Economists have determined that for every 1944 dollar invested in the GI Bill, the country received approximately $7 in return, through increased economic productivity, consumer spending and tax revenues.

Legislation for public banks has now been introduced in 18 US states, on the model of the highly successful Bank of (BND). Elaborated on at the Public Banking Conference by Ed Sather and Rozanne Junker, the BND is currently the country's only state-owned bank and has been a major factor in allowing the state to escape the recent credit crisis. is the only state to boast a significant budget surplus every year since the economic downturn of 2008.

This reporter noted that 40 percent of banks globally are also publicly owned. These are largely in the BRIC countries (, , and ), which also escaped the credit crisis, largely because their public banks did not rely on derivatives and, unlike private banks, lent counter-cyclically to cushion their economies from the downturn.

Conference speaker Samuel Giles proposed that even public universities could set up their own banks, which could then leverage university monies for the university's own use, rather than giving those assets away to Wall Street to be speculated with and lent back at much higher interest rates.

Speakers Michael Sauvante and Mike Krauss noted that efforts are underway in several and municipalities to create public banks. One possibility is for public banks to take an aggressive role in ending the foreclosure crisis by acquiring abandoned and foreclosed homes by eminent domain. These homes could be added to the asset base of the bank, which could extend credit to restore them and then sell or rent them at reasonable rates.

Krauss noted that Philadelphia already has a strong effort underway to create a "land bank" - a bank to acquire, rehabilitate and create productive uses for the city's more than 40,000 vacant properties - and legislation (HB 1682) has been introduced in the State Legislature to enable this effort. But the land bank proposed is not designed to function as a depository bank that leverages funds into credit. Rather, it would simply work with appropriated funds or bond revenue. This is a positive step toward addressing a real need, but it could be enhanced by turning the land bank into a public bank - a chartered bank having the power to create money as credit on its books.

The efforts for developing public banks in are being led by the Project, which was a co-sponsor of the Conference and is supported in its work by the Public Banking Institute and the Center for State Innovation. The Project is creating partnerships with other public policy organizations to introduce legislation for a state Bank of in 2013, after elections are held and a strong foundation of support has been laid.

Revolution Without Bloodshed or War

We live under a tyranny today that is just as intolerable and unjust as that in 1776, but violent revolution is no longer an option. Our oppressors own the military and the media and their Federal Emergency Management Agency camps are waiting for us.

If change is to come, it must be peaceful and legal, beginning with a revolution in the minds and hearts of the people. The message of the Public Banking in Conference was that we can throw off the yoke of the financial elite by making money and credit a public utility; and the most feasible place to start is at the local level, with publicly owned banks.

Ellen is an attorney and the author of eleven books, including Web of Debt: The Shocking Truth About Our Money System and How We Can Break Free. Her websites are webofdebt.com and ellenbrown.com.  She is also chairperson of the Public Banking Institute.

Posted by Max Obuszewski at 9:50 AM