Too Big to Jail

Too Big to Jail 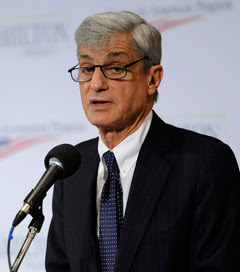 Can we all agree that a $1 billion swindle represents a lot of money, and the fact that Citigroup agreed last week to pay a $285 million fine to settle SEC charges for “misleading investors” demonstrates a damning admission of culpability?

So why has Robert Rubin, the onetime treasury secretary who went on to become Citigroup chairman during the time of the corporation’s financial shenanigans, never been held accountable for this and other deep damage done to the economy on his watch?

Rubin’s tenure atop the world of high finance began when he was co-chairman of Goldman Sachs, before he became Bill Clinton’s treasury secretary and pushed through the reversal of the Glass-Steagall Act, an action that legalized the formation of Citigroup and other “too big to fail” banking conglomerates.

Rubin’s destructive impact on the economy in enabling these giant corporate banks to run amok was far greater than that of swindler Bernard Madoff, who sits in prison under a 150-year sentence while Rubin sits on the Harvard Board of Overseers, as chairman of the Council on Foreign Relations and as a leader of the Brookings Institution’s Hamilton Project.

Rubin was rewarded for his efforts on behalf of Citigroup with a top job as chairman of the bank’s executive committee and at least $126 million in compensation. That was “compensation” for steering the bank to the point of a bankruptcy avoided only by a $45 billion taxpayer bailout and a further guarantee of $300 billion of the bank’s toxic assets.

Those toxic assets and other collateralized debt obligations and credit default swaps were exempted from government regulation by the Commodity Futures Modernization Act, which Rubin helped design while he was treasury secretary and which was turned into law when Rubin protégé Lawrence Summers took over that Cabinet post.

In arguing that the derivatives market in housing mortgages and other debt obligations required no government oversight, Summers told Congress, “First, the parties to these kinds of contracts are largely sophisticated financial institutions that would appear to be eminently capable of protecting themselves from fraud and counterparty insolvencies. ... Second, given the nature of the underlying assets—namely supplies of financial exchange and other financial instruments—there would seem to be little scope for market manipulation. ...”

Oops. One wonders if Summers, who went on to be president of Harvard after playing such a disastrous role in the federal government, ever asked his mentor Rubin what went wrong. After all, it was Rubin who was a honcho at the “sophisticated financial institution” of Citigroup when, as the Securities and Exchange Commission filing against the bank explains, Citigroup structured and marketed a $1 billion toxic asset to investors without disclosing that it was simultaneously betting against that asset.

Back in January of 2008, knowing full well of the chicanery of his own bank and others with which he was quite familiar, Rubin nonetheless told an audience at Cooper Union in New York that the turmoil in the markets was “all part of a cycle of periodic excess leading to periodic disruption.” CNNMoney, reporting on his talk, noted that Rubin “doesn’t seem particularly alarmed. ... And the economic problems that he did acknowledge were blamed on just about everyone but the major financial players.”

Rubin, who became a key adviser to the Obama campaign, has long cultivated an image as a do-gooder by making philanthropic contributions that deflect attention from the consequences of his own grievous actions. He has played a major role in shaping Obama administration economic policy not only through former aides like Summers and Treasury Secretary Timothy Geithner but through the Hamilton Project, which he has funded at the Brookings Institution. The Hamilton Project has had much influence over the Democratic Party, and President Barack Obama as a young senator was the project’s first public speaker.

But facts these days tend to intrude in ways inconvenient to the superrich, who assume they can control the narrative. This month the Hamilton Project released a depressing assessment of the results of the era of radical market deregulation that Rubin’s policies launched, particularly as it had a horrendous effect on children.

Referring to the “Great Recession,” dismissed by Rubin at its inception as a mere blip in the business cycle, the report noted that the family income of the median child in the U.S. has fallen nearly 14 percent in the past five years and is now 7 percent lower than in 1975, concluding that while the income of the top 10 percent of families with children has increased 45 percent in the last 35 years, “half of America’s children are worse-off than their counterparts 35 years ago.”

That’s a telling obituary for the illusion, fostered by Robert Rubin as effectively as anyone, that the 22 percent of children in the who suffer below the poverty line and the offspring of multimillionaires like Rubin are living in the same .

Posted by Max Obuszewski at 6:07 PM