Rep. Elijah Cummings and Sen. Ben Cardin are expected to join a march for jobs along the proposed rapid transit Red Line on Sat., Nov. 12.  West Baltimore congregations and community groups, organized by BRIDGE, are planning a Pilgrimage for Jobs and Justice.  It begins at 9 AM at Edmondson Ave. and Cooks and it will end at noon at the West Baltimore MARC commuter rail station at Franklin and Smallwood Sts. Rep. Elijah Cummings will address the crowd in a stop at the Edmondson Village Shopping Center at 9:15 AM. Staff from the office of Sen. Ben Cardin will listen to testimony at a field hearing at St.Bernardine Church Hall at 10 Am. Senator Cardin has been invited.  The three-mile walk will end by noon at the MARC commuter rail station.  This will be an opportunity to get food from the Farmers Market and celebrate an address by a representative from the White House.

BRIDGE, congregation-based organization for social justice, has lobbied for jobs and community input in the proposed Red Line development. Speeches along the way will address the need for job training and opportunity in , improved public transportation, and community planning to heal the damage done to the neighborhood by the failed highway “road to nowhere.” Speakers will also address the legacy of segregation that has marked 's neighborhoods and continues to limit African Americans' access to jobs, particularly in the construction industry. Speakers will call for federal spending on infrastructure and job creation. Contact Maureen Daly at maureen.daly4@verizon.net or 410-235-1669.

Now Is the Time for an Economic Bill of Rights 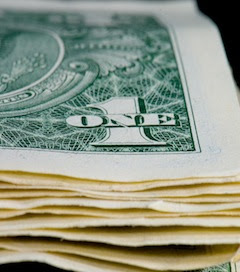 We are beginning to understand that our money is not created by the federal government, but by banks. (Photo: photobunny / flickr)

Henry Ford said, "It is well enough that the people of the nation do not understand our banking and monetary system, for if they did, I believe there would be a revolution before tomorrow morning."

We are beginning to understand, and Occupy Wall Street looks like the beginning of the revolution.

We are beginning to understand that our money is created, not by the government, but by banks. Many authorities have confirmed this, including the Federal Reserve itself. The only money the government creates today are coins, which compose less than one ten-thousandth of the money supply. Federal Reserve Notes, or dollar bills, are issued by Federal Reserve banks, all 12 of which are owned by the private banks in their district. Most of our money comes into circulation as bank loans, and it comes with an interest charge attached.

According to Margrit Kennedy, a German researcher who has studied this issue extensively, interest now composes 40 percent of the cost of everything we buy. We don't see it on the sales slips, but interest is exacted at every stage of production. Suppliers need to take out loans to pay for labor and materials before they have a product to sell.

For government projects, Kennedy found that the average cost of interest is 50 percent. If the government owned the banks, it could keep the interest and get these projects at half price. That means governments - state and federal - could double the number of projects they could afford, without costing the taxpayers a single penny more than we are paying now.

This opens up exciting possibilities. Federal and state governments could fund all sorts of things we think we can't afford now, simply by owning their own banks. They could fund something Franklin D. Roosevelt and Martin Luther King dreamt of - an Economic Bill of Rights.

A Vision for Tomorrow

In his first inaugural address in 1933, criticized the sort of near-sighted Wall Street greed that precipitated the Great Depression. He said, "They only know the rules of a generation of self-seekers. They have no vision, and where there is no vision the people perish."

's own vision reached its sharpest focus in 1944, when he called for a Second Bill of Rights. He said:

This Republic had its beginning, and grew to its present strength, under the protection of certain inalienable political rights.... They were our rights to life and liberty.

As our nation has grown in size and stature, however - as our industrial economy expanded - these political rights proved inadequate to assure us equality in the pursuit of happiness.

He then enumerated the economic rights he thought needed to be added to the Bill of Rights. They included:

The right to a job;

The right to earn enough to pay for food and clothing;

The right of businessmen to be free of unfair competition and domination by monopolies;

The right to a decent home;

The right to adequate medical care and the opportunity to enjoy good health;

The right to adequate protection from the economic fears of old age, sickness, accident, and unemployment;

The right to a good education.

Times have changed since the first Bill of Rights was added to the Constitution in 1791. When the country was founded, people could stake out some land, build a house on it, farm it and be self-sufficient. The Great Depression saw people turned out of their homes and living in the streets - a phenomenon we are seeing again today. Few people now own their own homes. Even if you have signed a mortgage, you will be in debt peonage to the bank for 30 years or so before you can claim the home as your own.

Health needs have changed, too. In 1791, foods were natural and nutrient rich, and outdoor exercise was built into the lifestyle. Degenerative diseases such as cancer and heart disease were rare. Today, health insurance for some people can cost as much as rent.

Then there are college loans, which collectively now exceed a trillion dollars, more even than credit card debt. Students are coming out of universities not just without jobs, but carrying a debt of $20,000 or so on their backs. For medical students and other post-graduate students, it can be $100,000 or more. Again, that's as much as a mortgage, with no house to show for it. The justification for incurring these debts was supposed to be that the students would get better jobs when they graduated, but now jobs are scarce.

After World War II, the GI Bill provided returning servicemen with free college tuition, as well as cheap home loans and business loans. It was called "the GI Bill of Rights." Studies have shown that the GI Bill paid for itself seven times over and is one of the most lucrative investments the government ever made.

The government could do that again - without increasing taxes or the federal debt. It could do it by recovering the power to create money from Wall Street and the financial services industry, which now claim a whopping 40 percent of everything we buy.

An Updated Constitution for a New Millennium

Banks acquired the power to create money by default when Congress declined to claim it at the Constitutional Convention in 1787. The Constitution says only that "Congress shall have the power to coin money [and] regulate the power thereof." The founders left out not just paper money, but checkbook money, credit card money, money market funds, and other forms of exchange that make up the money supply today. All of them are created by private financial institutions, and they all come into the economy as loans with interest attached.

Governments - state and federal - could bypass the interest tab by setting up their own publicly owned banks. Banking would become a public utility, a tool for promoting productivity and trade rather than for extracting wealth from the debtor class.

Congress could go further: it could reclaim the power to issue money from the banks and fund its budget directly. It could do this, in fact, without changing any laws. Congress is empowered to "coin money," and the Constitution sets no limit on the face amount of the coins. Congress could issue a few one-trillion dollar coins, deposit them in an account and start writing checks.

The Fed's own figures show that the money supply has shrunk by $3 trillion since 2008. That sum could be spent into the economy without inflating prices. Three trillion dollars could go a long way toward providing the jobs and social services necessary to fulfill an Economic Bill of Rights. Guaranteeing employment to anyone willing and able to work would increase gross domestic product, allowing the money supply to expand even further without inflating prices, since supply and demand would increase together.

Modernizing the Bill of Rights

As Bob Dylan said, "The times they are a-changin'." Revolutionary times call for revolutionary solutions and an updated social contract. Apple and Microsoft update their programs every year. We are trying to fit a highly complex, modern monetary scheme into a constitutional framework that is 200 years old.

After President Roosevelt died in 1945, his vision for an Economic Bill of Rights was kept alive by Martin Luther King. "True compassion," King declared, "is more than flinging a coin to a beggar; it comes to see that an edifice which produces beggars needs restructuring."

King, too, has now passed away, but his vision has been carried on by a variety of money reform groups. The government as "employer of last resort," guaranteeing a living wage to anyone who wants to work, is a basic platform of Modern Monetary Theory (MMT). An MMT web site declares that by "[e]nding the enormous unearned profits acquired by the means of the privatization of our sovereign currency ... [i]t is possible to have truly full employment without causing inflation."

What was sufficient for a simple agrarian economy does not provide an adequate framework for freedom and democracy today. We need an Economic Bill of Rights, and we need to end the privatization of the national currency. Only when the privilege of creating the national money supply is returned to the people can we have a government that is truly of the people, by the people and for the people.

Ellen is an attorney and the author of eleven books, including Web of Debt: The Shocking Truth About Our Money System and How We Can Break Free. Her websites are webofdebt.com and ellenbrown.com.

Posted by Max Obuszewski at 7:43 PM