Non-Violence is Back and Shaking Things Up

Published on Friday, November 25, 2011 by the Toronto Star

Non-Violence is Back and Shaking Things Up

This is a time of rejuvenation for non-violence. The Occupy movements were built on what one writer called “the courage of young people to fly into conflict on Gandhi’s wings.” The Arab Spring won its tenuous victories non-violently. A leader of the Tunisian Islamist party said recently, “I wish in the West they would focus on our non-violence when they talk about Islam, how the masses of people did not react to the incredible violence thrown at them.” He meant this in contrast to the bloody civil war that Algerian Islamists fell into after being robbed of their election victory in 1992. 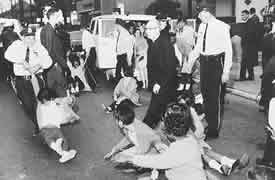 The civil rights movement led by Martin Luther King in the 1950s and 1960s was a for non-violence. But that was also a time when young activists were enthralled by freedom fighters and national liberation wars. Among African-Americans, the Black Panthers challenged King. They said change must come “by any means necessary,” and they preferred guns.

The non-violent movement itself lacks an extensive history. If you exclude Jesus of Nazareth (turn the other cheek) due to ambiguity (I come not to bring peace but a sword), it fills a small bookshelf with brief texts — as if the idea was to do something, not write something — over a short time span. It includes Thoreau, Tolstoy, Gandhi, King and, near the start, poet Percy Bysshe Shelley. He wrote The Masque of Anarchy in 1819 after the “Peterloo” massacre of protesters against economic crisis and lack of democracy by British cavalry. It was called Peterloo as an ironic comment on ’s defeat of Napoleon at .

Shelley proclaimed: “Let a great assembly be/ Of the fearless, of the free . . . Stand ye calm and resolute,/ Like a forest close and mute,/ With folded arms and looks which are/ Weapons of unvanquished war . . . With folded arms and steady eyes,/ And little fear, and less surprise/ Look upon them as they slay/ Till their rage has died away/ Then they will return with shame/ To the place from which they came . . .”

It’s probably the first depiction of non-violent action. I particularly like his use of “assembly,” still common in the Occupy movements.

Now think of Black Bloc actions during the G20 here, like the clip of a masked protester bashing an ATM on frenetically, which was replayed endlessly. It wasn’t violence against people, it was against a thing. But contrast that to Shelley’s image and you catch the active, even menacing nature of true non-violence. The Black Bloc attack things; the non-violent refuse to attack people, and confront them with their own violence instead. It’s far scarier. Ben Kingsley caught this ferocious quality of Gandhi’s non-violence in the 1982 film.

Or think of of occupiers being pepper sprayed last week by a Darth Vaderish cop as they sat impassively (shades of a Mountie spraying protesters at APEC in 1997). There’s a sense of cowardliness in the sprayer versus purposefulness among the sprayees. It’s Shelley’s image. The police look fearful and diminished. You see them cringe a bit as the crowd chants, Shame. They might look even more intimidated if everyone stayed utterly silent, “calm and resolute, like a forest close and mute.”

These writers were aware of each other. Gandhi often quoted Shelley, during strikes or protests. (I’ve never understood why strikes aren’t treated as a core component of the non-violent tradition.) King said he discovered non-violence through Thoreau. Tolstoy’s last letter, in 1910, was to Gandhi.

There’s also a theme in non-violence that has to do with wishing not to recreate what you hate through the very act of opposing it. I can relate to that. In Gandhi’s introduction to Tolstoy’s Letter to a Hindu, he says: “It is for us to pause and consider whether, in our impatience of English rule, we do not want to replace one evil by another and a worse.” Thoreau wrote: “What I have to do is to see, at any rate, that I do not lend myself to the wrong which I condemn.”

Thoreau’s perfect little essay appeared in a collection called A Yankee in Canada. Its title is Civil Disobedience, with the stress, I like to think on “civil.”

Rick Salutin is a Canadian novelist, playwright, journalist, and critic and has been writing for more than forty years. Until October 1, 2010, he wrote a regular column in the Globe and Mail; on February 11, 2011, he began a weekly column in the Toronto Star.

Posted by Max Obuszewski at 8:06 PM