Published on Monday, November 7, 2011 by TruthDig.com

Editor’s note: Truthdig columnist Chris Hedges, an activist, an author and a member of a reporting team that won a 2002 Pulitzer Prize, wrote this article after he was released from custody following his arrest last Thursday. He and about 15 other participants in the movement were detained as they protested outside the global headquarters of Goldman Sachs in lower . 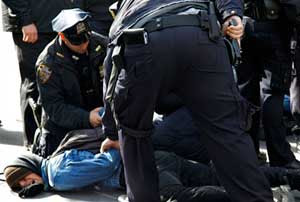 Police arrest protesters as they staged a sit-down at Goldman Sachs headquarters on Thursday in . (AP / Bebeto Matthews)

I carry these faces. They do not leave me. I look at my own children and cannot forget them, these other children who never had a chance. War brings with it a host of horrors, including famine, but the worst is always the human detritus that war and famine leave behind, the small, frail bodies whose tangled limbs and vacant eyes condemn us all. The wealthy and the powerful, the ones behind the glass at Goldman Sachs, laughed and snapped pictures of us as if we were a brief and odd lunchtime diversion from commodities trading, from hoarding and profit, from this collective sickness of money worship, as if we were creatures in a cage, which in fact we soon were.

A glass tower filled with people carefully selected for the polish and self-assurance that come with having been formed in institutions of privilege, whose primary attributes are a lack of consciousness, a penchant for deception and an incapacity for empathy or remorse. The curious onlookers behind the windows and we, arms locked in a circle on the concrete outside, did not speak the same language. Profit. Globalization. War. National security. These are the words they use to justify the snuffing out of tiny lives, acts of radical evil. Goldman Sachs’ commodities index is the most heavily traded in the world. Those who trade it have, by buying up and hoarding commodities futures, doubled and tripled the costs of wheat, rice and corn. Hundreds of millions of poor across the globe are going hungry to feed this mania for profit. The technical jargon, learned in business schools and on trading floors, effectively mask the reality of what is happening—murder. These are words designed to make systems operate, even systems of death, with a cold neutrality. Peace, love and all sane affirmative speech in temples like Goldman Sachs are, as W.H. Auden understood, “soiled, profaned, debased to a horrid mechanical screech.”

We seemed to have lost, at least until the advent of the Occupy Wall Street movement, not only all personal responsibility but all capacity for personal judgment. Corporate culture absolves all of responsibility. This is part of its appeal. It relieves all from moral choice. There is an unequivocal acceptance of ruling principles such as unregulated capitalism and globalization as a kind of natural law. The steady march of corporate capitalism requires a passive acceptance of new laws and demolished regulations, of bailouts in the trillions of dollars and the systematic looting of public funds, of lies and deceit. The corporate culture, epitomized by Goldman Sachs, has seeped into our classrooms, our newsrooms, our entertainment systems and our consciousness. This corporate culture has stripped us of the right to express ourselves outside of the narrowly accepted confines of the established political order. It has turned us into compliant consumers. We are forced to surrender our voice. These corporate machines, like fraternities and sororities, also haze new recruits in company rituals, force them to adopt an unrelenting cheerfulness, a childish optimism and obsequiousness to authority. These corporate rituals, bolstered by retreats and training seminars, by grueling days that sometimes end with initiates curled up under their desks to sleep, ensure that only the most morally supine remain. The strong and independent are weeded out early so only the unquestioning advance upward. Corporate culture serves a faceless system. It is, as Hannah Arendt writes, “the rule of nobody and for this very reason perhaps the least human and most cruel form of rulership.”

Our political class, and its courtiers on the airwaves, insists that if we refuse to comply, if we step outside of the Democratic Party, if we rebel, we will make things worse. This game of accepting the lesser evil enables the steady erosion of justice and corporate plundering. It enables corporations to harvest the nation and finally the global economy, reconfiguring the world into neofeudalism, one of masters and serfs. This game goes on until there is hardly any action carried out by the power elite that is not a crime. It goes on until corporate predators, who long ago decided the nation and the planet were not worth salvaging, seize the last drops of wealth. It goes on until moral acts, such as calling for those inside the corporate headquarters of Goldman Sachs to be tried, see you jailed, and the crimes of financial fraud and perjury are upheld as lawful and rewarded by the courts, the U.S. Treasury and the Congress. And all this is done so a handful of rapacious, immoral plutocrats like Lloyd Blankfein, the CEO of Goldman Sachs who sucks down about $250,000 a day and who lied to the U.S. Congress as well as his investors and the public, can use their dirty money to retreat into their own Forbidden City or Versailles while their underlings, basking in the arrogance of power, snap amusing photos of the rabble outside their gates being hauled away by the police and company goons.

It is vital that the occupation movements direct attention away from their encampments and tent cities, beset with the usual problems of hastily formed open societies where no one is turned away. Attention must be directed through street protests, civil disobedience and occupations toward the institutions that are carrying out the assaults against the 99 percent. Banks, insurance companies, courts where families are being foreclosed from their homes, city offices that put these homes up for auction, schools, libraries and firehouses that are being closed, and corporations such as General Electric that funnel taxpayer dollars into useless weapons systems and do not pay taxes, as well as propaganda outlets such as the New York Post and its evil twin, Fox News, which have unleashed a vicious propaganda war against us, all need to be targeted, shut down and occupied. Goldman Sachs is the poster child of all that is wrong with global capitalism, but there are many other companies whose degradation and destruction of human life are no less egregious.

It is always the respectable classes, the polished Ivy League graduates, the prep school boys and girls who grew up in , , or , who are the most susceptible to evil. To be intelligent, as many are at least in a narrow, analytical way, is morally neutral. These respectable citizens are inculcated in their elitist enclaves with “values” and “norms,” including pious acts of charity used to justify their privilege, and a belief in the innate goodness of American power. They are trained to pay deference to systems of authority. They are taught to believe in their own goodness, unable to see or comprehend—and are perhaps indifferent to—the cruelty inflicted on others by the exclusive systems they serve. And as norms mutate and change, as the world is steadily transformed by corporate forces into one of a small cabal of predators and a vast herd of human prey, these elites seamlessly replace one set of “values” with another. These elites obey the rules. They make the system work. And they are rewarded for this. In return, they do not question.

Those who resist—the doubters, outcasts, renegades, skeptics and rebels—rarely come from the elite. They ask different questions. They seek something else—a life of meaning. They have grasped Immanuel Kant’s dictum, “If justice perishes, human life on Earth has lost its meaning.” And in their search they come to the conclusion that, as Socrates said, it is better to suffer wrong than to do wrong. This conclusion is rational, yet cannot be rationally defended. It makes a leap into the moral, which is beyond rational thought. It refuses to place a monetary value on human life. It acknowledges human life, indeed all life, as sacred. And this is why, as Arendt points out, the only morally reliable people when the chips are down are not those who say “this is wrong,” or “this should not be done,” but those who say “I can’t."

There are streaks in my lungs, traces of the tuberculosis that I picked up around hundreds of dying Sudanese during the famine I covered as a foreign correspondent. I was strong and privileged and fought off the disease. They were not and did not. The bodies, most of them children, were dumped into hastily dug mass graves. The scars I carry within me are the whispers of these dead. They are the faint marks of those who never had a chance to become men or women, to fall in love and have children of their own. I carried these scars to the doors of Goldman Sachs. I had returned to living. Those whose last breaths had marked my lungs had not. I placed myself at the feet of these commodity traders to call for justice because the dead, and those who are dying in slums and refugee camps across the planet, could not make this journey. I see their faces. They haunt me in the day and come to me in the dark. They force me to remember. They make me choose sides. As the metal handcuffs were fastened around my wrists I thought of them, as I often think of them, and I said to myself: “Free at last. Free at last. Thank God almighty I am free at last.”

Chris Hedges writes a regular column for Truthdig.com. Hedges graduated from and was for nearly two decades a foreign correspondent for The New York Times. He is the author of many books, including: War Is A Force That Gives Us Meaning, What Every Person Should Know About War, and American Fascists: The Christian Right and the War on America.  His most recent book is Empire of Illusion: The End of Literacy and the Triumph of Spectacle.