Published on Monday, November 14, 2011 by the San Francisco Chronicle 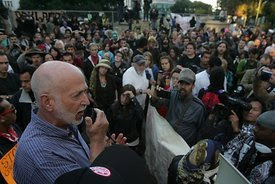 Dan Siegel, mayoral legal advisor, addresses Occupy Oakland protesters in on Wednesday, Oct. 26, 2011, in , Dan Siegel, a civil rights attorney and one of 's most active and vocal police critics, said the city should have done more to work with campers before sending in police.

"The city sent police to evict this camp, arrest people and potentially hurt them," Siegel said. "Obviously, we're not on the same page. It's an amazing show of force to move tents from a public place."

Siegel strongly and vocally opposed any plan by the city to take down the month-old camp in the days leading up the police raid.

"I am really disappointed with the city," Siegel said at the protest near City Hall. has become "the most hostile city to the Occupy movement. Where else are they having 600 police officers take down some tents?"

At a news conference today, Quan said she has known Siegel since the two attended UC Berkeley together and noted that they have been known to disagree. She said Siegel had been working on "a small project on a volunteer basis in my office" and would only say this of his departure: "He's moving on. I'm moving on."

Siegel said he wasn't impressed with Quan's response to the protest.

"She worked so hard to get into office," he said. "Obviously her inauguration was a tremendously optimistic day for so many people. What can you say? She didn't deal with it well."

Siegel had previously sparred with police officials over the city's gang injunctions and the handling of violent protests after the a jury found Johannes Mehserle, the former BART police officer, guilty of involuntary manslaughter after shooting an unarmed rider.

In a statement, Quan said it was time for the camp to come down.

"Camping is a tactic. It is one that has divided , a city of the 99 percent. It's time to work together on the issues of unemployment, foreclosures and education cuts. While the camping must end, the movement continues."

Chronicle staff writer Will Kane contributed to this report.

Posted by Max Obuszewski at 6:42 PM