Published on Tuesday, November 29, 2011 by the Associated Press

How did your Senators vote? Roll call below...

WASHINGTON — The Senate on Tuesday rejected an effort to strip divisive provisions from a defense bill that deal with the capture and handling of suspected terrorists, setting up a showdown with the White House. 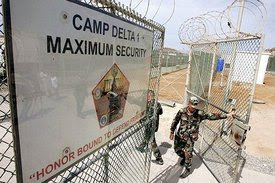 A US Army guard opens the gate at Camp Delta at Guantanamo Naval Base in Guantanamo (AFP/Mark Wilson) The resounding 61-37 vote sent a strong message to the Obama administration, which has threatened a veto of the bill over the requirement of military custody for captured terror suspects and limitations on the ability to transfer detainees from the naval prison at . The clash underscores the ongoing dispute between the executive branch and some in Congress over whether to treat suspected terrorists as prisoners of war or criminals.

“The provisions would dramatically change broad counterterrorism efforts by requiring law enforcement officials to step aside and ask the Department of Defense to take on a new role they are not fully equipped for and do not want,” said Sen. Mark Udall, D-Colo., who added that the legislation would make the military “police, judge and jailer.”

His amendment would have taken out the sections on detainees and instead called for congressional hearings with Pentagon and administration officials on the issue.

Defending the provisions, Senate Armed Services Committee Chairman Carl Levin argued that they contain a national security waiver for the administration. The issue has pitted Levin against other senior Democratic senators, including the chairmen of the Intelligence and Judiciary committees.

“Should somebody when it’s been determined ... to be a member of an enemy force who has come to this nation or is in this nation to attack us as a member of a foreign enemy, should that person be treated according to the laws of war? And the answer is yes,” said Levin, D-Mich.

The bill would require military custody of a suspect deemed to be a member of al-Qaida or its affiliates and involved in plotting or committing attacks on the .

Defense Secretary Leon Panetta and FBI Director Robert Mueller have spelled out their opposition in letters to lawmakers. Mueller said Monday that because the legislation applies to people detained in the , it could disrupt ongoing international terrorism investigations and make it difficult for the FBI to work with a grand jury or obtain subpoenas.

Mueller also described the waiver as too cumbersome, requiring that it be obtained from the defense secretary in consultation with the secretary of state and the director of National Intelligence with a certification to Congress.

The vote came shortly after the weekly Republican and Democratic policy luncheons. A guest at the Republican session was former Vice President Dick Cheney, an advocate for harsh interrogation tactics against suspected enemies during his two terms in office. Republicans said he was a guest and did not make remarks at the session despite an intense discussion within GOP ranks about the detainee provisions.

The sweeping defense bill would authorize $662 billion for military personnel, weapons systems, the wars in and and national security programs in the Energy Department. Reflecting a period of austerity and deficit-driven cuts in military spending, the bill is $27 billion less than what Obama requested for the fiscal year beginning Oct. 1 of this year. The Senate hopes to complete the legislation by week’s end.

Earlier this month, Armed Services Committee investigators found about 1,800 cases of suspect counterfeit electronic parts being sold to the Pentagon, with lawmakers blaming for dumping them. By voice vote, the Senate on Tuesday approved a broad amendment to improve detection, including a provision that would prohibit contractors from charging the Pentagon for the cost of fixing the problem when counterfeit parts are found

The Senate also rejected an amendment by Sen. Rand Paul, R-Ky., that would have ended the authority for using force in . The vote was 67-30.

After nearly nine years of war, some 13,000 troops are scheduled to leave by year’s end, but Paul argued that his measure was about the separation of powers and Congress needed to reclaim its authority to declare war.

Posted by Max Obuszewski at 9:41 PM