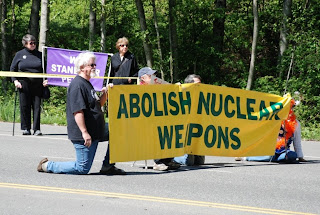 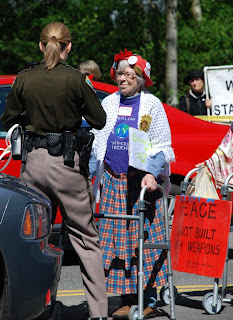 We have lost a great peacemaker.  I will never forget the day that Betty Schroeder climbed up on a roof at Applied Physics Laboratory to protest its nuclear weapons research.  And the trial was a treat as well.

Pat Bitnie shared this news: “On March 6 Betty was diagnosed with cancer in the abdominal area that had already traveled to bone tissue.  So she immediately requested hospice care...choosing not to go the route of radiation or chemo therapy.  She was at home, and received excellent hospice care...really fine staff to meet most of her needs.

“After a steep decline this past week, Betty passed away early Friday morning.  I am relieved that she is at  peace, and not suffereing any more.  She contributed a lot to the peace movement, was strong in her beliefs, and left no doubt about her convictions.  I honored her wishes that her body be used for medical research and teaching.

“I am doing fine in the wake of my daughter's visit last weekend, and son's two weeks before that, and am feeling very much supported by our local peace community and a few good neighbors.”

Ten Arrested at Mother’s Day Weekend Action at Sub Base

Members of the Seattle Raging Grannies entered the crosswalk at NW

walkers and canes, and carrying signs calling for an end to nuclear

weapons, they were arrested by Kitsap County Sherriff’s officers.

Another group subsequently entered the roadway closer to the base

entrance holding a banner reading, “Abolish Nuclear Weapons”, and was

also arrested.  All were charged with “attempted disorderly conduct”.

Supporters lined holding a variety of signs and banners

calling for an end to nuclear weapons.  Members of Women in Black held

signs saying, “We Stand for Peace”.   The approximately 50

participants, were part of for Nonviolent Action’s

disarmament and peace; the theme of GZ’s action was “Mom Says, Use

On the overcrossing (at ) a group of

GZ’s next scheduled event will be August 8th -10th, commemorating the

anniversaries of the bombings of and .

Naval Base Kitsap-Bangor is home to the U.S. Navy's West Coast Trident

nuclear submarine fleet.  "The warheads assigned to the ballistic

missile submarines stationed at and at , now

constitute more than half of the strategic weapons force" -

for Nonviolent Action is committed to nonviolent

resistance to Trident and the abolition of all nuclear weapons.

Photos from the May 9th action attached to this release. Captions: Photo “GZ 5-9-09 Banner in Roadway” shows Ground Zero members blocking the entrance to Naval Base Kitsap-Bangor on May 9, 2009.

Posted by Max Obuszewski at 2:00 PM