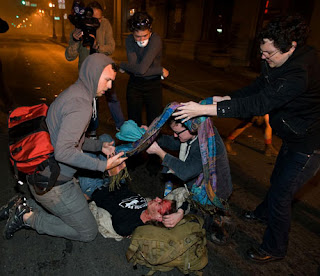 9:48 a.m. | Updated Riot police in Oakland dispersed hundreds of protesters with tear gas on Tuesday night as crowds tried to re-enter a plaza outside of City Hall that the authorities had cleared of an encampment earlier in the day.

The forceful response by the police to protesters in came as the police in moved in early Wednesday morning to clear an encampment from the city’s central . At least 53 people connected to the protest group Occupy Atlanta were arrested, and the park was cleared by 2 a.m. Eastern time, the Atlanta Journal Constitution reported.

By Wednesday morning in downtown , a dim cloud of gas still hung in the air over , according to images broadcast on CNN. A small number of police in riot gear stood by barricades around the plaza and a handful of protesters held signs nearby.

“It sounded like bombs,” said Joaquin Jutt, 24, a digital animator who was among the protesters on Tuesday night. “There was a stinging and burning in my throat, eyes and nostrils. My eyes burned like there was hot sauce in them.”

Protesters, many affiliated with the group Occupy Oakland, can be seen scurrying away from billowing clouds of gas and what appear to be flash grenades in video recorded from a high vantage point in a nearby office building:

The clashes on Tuesday night occurred after the police removed about 170 demonstrators who had been staying in the area after being warned that such a camp was illegal and that they faced arrest if they remained, the police said in a statement. City officials said 97 people were arrested in the morning raid.

In the video below, included in a report by the Oakland Tribune, the police can be seen dismantling the camp and making arrests early Tuesday morning, using small amounts of tear gas:

The first scuffle broke out later in the day after hundreds marched back to City Hall in an effort to re-establish a presence in the area of the dispersed camp. The police put the number of protesters at more than 1,000, in a statement released Tuesday night.

The A.P. posted edited video of the scene from the evening until after dusk as the police moved in and crowds thinned:

The crowds dispersed after the first round of tear gas but soon returned in similar numbers, according to protesters on the scene.

At around 9:30 p.m., there was a tense faceoff between protesters and police officers on Broadway at . About 100 officers, some appearing to be sheriff’s deputies, stood behind a metal barricade in full riot gear and wearing gas masks, while on the other side people pressed against the barricade, waving peace signs and chanting slogans. A few protesters hurled objects — what looked like water bottles — at the police, while over a loud speaker, officers instructed people to disperse or risk “chemical agents.”

A video, captured by The New York Times, showed a chaotic scene:

Shortly after 9:30 p.m. the announcements stopped. Moments later, the police began firing canisters of tear gas into the crowd. Many people ran, but a few protesters wearing gas masks stayed and continued to throw things at the police. Those who had been affected by the gas coughed repeatedly and appeared to weep. Some stooped before a woman who volunteered to rinse reddened eyes.

This video, also recorded by The New York Times, shows a protester having his eyes rinsed:

At a late-night news conference, the city’s acting police chief, Howard Jordan, said officers needed to use tear gas after protesters threw rocks and bottles at them. The city has seen multiple clashes between protesters and the police in recent years, particularly in the aftermath of the 2009 shooting of Oscar Grant III, a young, unarmed young black man, by a white transit officer. (Protesters who had occupied the park in front of City Hall had begun calling it Oscar Grant Plaza.)

Protesters posted photos of injuries they said had been sustained during the protests, some said to have been caused by rubber bullets:

The police denied firing flash grenades or rubber bullets at protesters. “The loud noises that were heard originated from M-80 explosives thrown at Police by protesters,” the police said in a statement. “In addition, Police fired approximately four bean bag rounds at protesters to stop them from throwing dangerous objects at the officers.”

The police also explained their use of tear gas:

Tear gas is regularly used by police departments across the to control crowds. The police have used tear gas to control large protests in January 2009 and in July 2010, when anger over the killing of Mr. Grant spilled over into street violence.

In raw video taken at around 8 p.m. and posted on KGO-TV’s Web site, flashes of light and explosions can be heard as people sprint away. Smoke engulfs the scene.

In what may be the most dramatic video of the melee, posted by KTVU, a protester very near the police line can be seen falling hard to the ground after a loud pop and a flash. As a crowd gathers around to help the protester, another loud pop and flash occurs in the middle of the group, scattering them.

A shorter version of the same video was also reposted to YouTube, where the same scene occurs at 0:22. [Warning: Some fleeting profanity.]

It was not immediately clear where the flash-bang originated or if it was a heavy firecracker, as the police indicated, or a non-lethal form of crowd control, as the YouTube title of the video suggests (‘Flashbangs USED on protesters OPD LIES’).

The police said in a statement that attacks against officers had precipitated the use of “less lethal force tactics” against protesters on Tuesday night:

During the evening protest, a number of officers were assaulted, doused with hazardous materials and hit with large rocks and bottles, which resulted in the declaration of an unlawful assembly and the order to disperse. To assist in the dispersal efforts, officers used less lethal force tactics.

The city of explained its decision to the Occupy encampment early Tuesday morning — which touched off the later protests and lead to the violence — because of unsanitary conditions and “increasing incidents of violence.”

The San Francisco Chronicle reported on the early hours of the protest Tuesday night:

Early on, the scene outside City Hall was largely peaceful, but it was a different story a few blocks west on . Officers in riot gear hemmed in protesters around 6 p.m. and tried to arrest one person, as about 50 more surrounded them shouting, “Let him go, let him go.”

Protesters threw turquoise and red paint at the riot police officers’ faces and helmets. Some led the crowd in chanting, “This is why we call you pigs.”

Others pleaded with the agitators to be peaceful and return to the march, yet some protesters tried to fight with the police and were clubbed and kicked in return.

Almost simultaneous to the events in , the police in arrested more than 50 protesters early Wednesday morning for refusing to leave the downtown city park.

For two weeks, the Occupy protesters had been camping out in tents, despite repeated warnings from the mayor, Kasim Reed, that they were violating a park curfew and other ordinances.

The protesters have drawn strong mixed reactions in , a regional banking hub that also has a record of tolerance for civil disobedience tied to its role in the civil rights movement.

On Tuesday, a spokesperson for the civil rights group the Rainbow PUSH Coalition, which is led by Rev. Jesse Jackson, called on Atlantans to oust Mr. Reed from office because of his confrontation of the protesters.

The protesters vowed to continue their demonstrations on Wednesday, rallying at the jail where the arrested protesters were held and marching to the Georgia State Capitol. Among those arrested, the protesters said on their Web site, was a state senator, Vincent D. Fort, and a former city councilman and radio host, Derrick Boazman.