"Convenient" Base Is Unexamined Excuse for US Silence on Bahrain Crackdown

"Convenient" Base Is Unexamined Excuse for US Silence on Crackdown 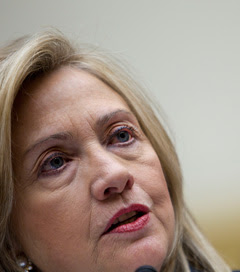 Pressure is building on the Obama administration to delay a proposed arms sale to , which brutally suppressed its pro-democracy movement and continues to squash dissent, The Washington Post reports. The Pentagon wants to sell $53 million worth of armored Humvees and anti-tank missiles to , a plan slammed by human rights groups, who want the to end its silence on the crackdown in .

This week, five senators - Sens. Casey, Durbin, Cardin, Menendez and Wyden - weighed in against the arms sale in a letter to Secretary of State Clinton:

"Completing an arms sale to under the current circumstances would weaken credibility at a critical time of democratic transition in the ," the senators wrote. "We urge you to send a strong signal that the does not condone the repression of peaceful demonstrators by delaying the possible arms sale until the Bahraini government releases its political prisoners, addresses the independent commission's recommendations and enters into meaningful dialogue with Bahraini civil society and opposition groups."

In noting that the has been quiet on the crackdown in , press reports usually mention the fact that the has a naval base there. In one sense, this is obviously a good thing: it's a key piece of information, clearly, about possible motivations for silence. If this fact weren't reported at all, one would have cause for legitimate complaint. But the way this fact is often cited gives the impression that it's a foregone conclusion that the administration can't speak up about human rights in because of the naval base.

Doesn't this assumption deserve some interrogation? If we say boo, do we lose the base automatically? And even if we did lose the base, would that be so awful? And if losing the base were a big concern, might not it be short-sighted in the long run to tie ourselves so closely to the regime? If the Shia majority victimized by the regime perceive that the base is the reason for our silence, doesn't this make it more likely that when democracy comes to , a democratically elected government will kick out the base? If the base were really so crucial, wouldn't we consider that? Is the presence of the base a "get out of jail free card" for justifying current policy?

Shouldn't these questions be considered before automatically assuming that "US interests" demand our silence on the crackdown?

For example, in the same Washington Post report, we find:

Actually ensuring that the kingdom lives up to its promises [of reform], however, is complicated by a host or regional considerations.

The kingdom, in addition to serving as a home base for the US Navy's 5th Fleet, is a bulwark against Iranian power in the region.

Two points are raised here: 1) the base, and 2) "a bulwark against Iranian power." Let's consider them in turn.

Is the base necessary to the ? A February 17 report in The New York Times called the base "mainly a matter of convenience." (Emphasis added.) The Times reported that the US naval base in Bahrain was "mainly a matter of convenience rather than necessity to the United States Navy," noting that the Navy "has only 2,300 personnel there working in the comfort of an isolated compound and making relatively little use of local port facilities for its major warships, which stay mainly at sea and at other anchorages."

Isn't that report striking, given that the opposite - that the base is key to the - is generally assumed? Was the February 17 Times report wrong? Shouldn't someone have to produce an argument that it was, before the claim that the base is key to the can be assumed? Isn't it noteworthy that the assertion that the base was mainly a convenience disappeared from The New York Times after the crackdown, when US policy, previously balanced between the desire to support democracy and the desire to maintain the status quo, came down squarely on the side of the maintaining the status quo? Doesn't that suggest that the presence of the base is not mainly a reason for the policy of silence, but mostly an excuse for it?

What about "bulwark against Iranian power"? Clearly, the current government of is currently part of the US-led alliance against , and under a democratic government in which the majority Shia population were enfranchised, maybe would not be quite so enthusiastic a member of this alliance. But is the current government a "bulwark" against ? The word implies something really important. The population of is a little over a million people. The population of is 78 million, 38 million, 82 million, 26 million. "Bulwark"?

has very cordial relations with ; nonetheless it has great relations with its fellow Gulf Arab countries (and also with the ). Have you noticed any huge concern that is undermining policy? (Recently, Oman helped free the American hitchhikers who were jailed in , using its influence to help achieve a objective.)

Isn't it possible, even likely, that if 's relations with were a bit more like 's, we would get along just fine?

Before it had a democratic uprising, most Americans had never heard of . Isn't it possible that tiny 's current status in the anti-Iran alliance is also mainly a matter of convenience rather than necessity? Shouldn't the question be examined rather than have its answer assumed? And again, if 's current status in the anti-Iran alliance is so crucial, might that not argue that the policy of silence could alienate the majority, making it more likely that the country will move further away from the under a democratic government?

And if maintaining the status quo in our relationship with is so crucial to the anti-Iran alliance, how come The Washington Post editorial board is against the arms sale?

This month the Pentagon notified Congress of a plan to sell armored Humvees and anti-tank missiles worth $53 million.

The message this sends is unmistakable: The regime's crackdown will not affect its cozy relationship with the . This is dangerous for the as well as for , because the government's attempt to suppress legitimate demands for change from a majority of the population is ultimately doomed to failure. 's ruling family should be given more reason to worry about its standing in . A congressional hold on the arms package would be a good way to start.

Is there anyone with more impeccable anti-Iran credentials than The Washington Post editorial board, which has called for a US policy of "regime change" in Iran and sharply criticized what is called the administration's "squishiness" about "military options" for dealing with Iran's nuclear program?

Doesn't all this suggest that people who claim that "US interests" dictate silence about the crackdown in should have to justify their position?

Senator Wyden and Rep. Jim McGovern have introduced a resolution of disapproval against the arms sale to the government of . You can ask your representative and senators to back that resolution here.

Posted by Max Obuszewski at 6:25 PM