There are no constraints left to halt ’s slide into a totalitarian capitalism. Electoral politics are a sham. The media have been debased and defanged by corporate owners. The working class has been impoverished and is now being plunged into profound despair. The legal system has been corrupted to serve corporate interests. Popular institutions, from labor unions to political parties, have been destroyed or emasculated by corporate power. And any form of protest, no matter how tepid, is blocked by an internal security apparatus that is starting to rival that of the East German secret police. The mounting anger and hatred, coursing through the bloodstream of the body politic, make violence and counter-violence inevitable. Brace yourself. The American empire is over. And the descent is going to be horrifying.

Those singled out as internal enemies will include people of color, immigrants, gays, intellectuals, feminists, Jews, Muslims, union leaders and those defined as “liberals.” They will be condemned as anti-American and blamed for our decline. The economic collapse, which remains mysterious and enigmatic to most Americans, will be pinned by demagogues and hatemongers on these hapless scapegoats. And the random acts of violence, which are already leaping up around the fringes of American society, will justify harsh measures of internal control that will snuff out the final vestiges of our democracy. The corporate forces that destroyed the country will use the information systems they control to mask their culpability. The old game of blaming the weak and the marginal, a staple of despotic regimes, will empower the dark undercurrents of sadism and violence within American society and deflect attention from the corporate vampires that have drained the blood of the country.

“We are going to be poorer,” David Cay Johnston told me. was the tax reporter of The New York Times for 13 years and has written on how the corporate state rigged the system against us. He is the author of “Free Lunch: How the Wealthiest Americans Enrich Themselves at Government Expense and Stick You With the Bill,” a book about hidden subsidies, rigged markets and corporate socialism. “Health care is going to eat up more and more of our income. We are going to have less and less for other things. We are going to have some huge disasters sooner or later caused by our failure to invest. Dams and bridges will break. Buildings will collapse. There are water mains that are 25 to 50 feet wide. There will be huge infrastructure disasters. Our intellectual resources are in decline. We are failing to educate young people and instill in them rigor. We are going to continue to pour money into the military. I think it is possible, I do not say it is probable, that we will have a revolution, a civil war that will see the end of the .”

“If we see the end of this country it will come from the right and our failure to provide people with the basic necessities of life,” said . “Revolutions occur when young men see the present as worse than the unknown future. We are not there. But it will not take a lot to get there. The politicians running for office who are denigrating the government, who are saying there are traitors in Congress, who say we do not need the IRS, this when no government in the history of the world has existed without a tax enforcement agency, are sowing the seeds for the destruction of the country. A lot of the people on the right hate the . They would say they hate the people they are arrayed against. But the whole idea of the is that we criticize the government. We remake it to serve our interests. They do not want that kind of society. They reject, as Aristotle said, the idea that democracy is to rule and to be ruled in turns. They see a world where they are right and that is it. If we do not want to do it their way we should be vanquished. This is not the idea on which the was founded.”

It is hard to see how this can be prevented. The engines of social reform are dead. Liberal apologists, who long ago should have abandoned the Democratic Party, continue to make pathetic appeals to a tone-deaf corporate state and Barack Obama while the working and middle class are ruthlessly stripped of rights, income and jobs. Liberals self-righteously condemn imperial wars and the looting of the U.S. Treasury by Wall Street but not the Democrats who are responsible. And the longer the liberal class dithers and speaks in the bloodless language of policies and programs, the more hated and irrelevant it becomes. No one has discredited American liberalism more than liberals themselves. And I do not hold out any hope for their reform. We have entered an age in which, as William Butler Yeats wrote, “the best lack all conviction and the worst are full of passionate intensity.”

“If we end up with violence in the streets on a large scale, not random riots, but insurrection and things break down, there will be a coup d’état from the right,” Johnston said. “We have already had an economic coup d’état. It will not take much to go further.”

How do we resist? How, if this descent is inevitable, as I believe it is, do we fight back? Why should we resist at all? Why not give in to cynicism and despair? Why not carve out as comfortable a niche as possible within the embrace of the corporate state and spend our lives attempting to satiate our private needs? The power elite, including most of those who graduate from our top universities and our liberal and intellectual classes, have sold out for personal comfort. Why not us?

The French moral philosopher Albert Camus argued that we are separated from each other. Our lives are meaningless. We cannot influence fate. We will all die and our individual being will be obliterated. And yet Camus wrote that “one of the only coherent philosophical positions is revolt. It is a constant confrontation between man and his obscurity. It is not aspiration, for it is devoid of hope. That revolt is the certainty of a crushing fate, without the resignation that ought to accompany it.”

“A living man can be enslaved and reduced to the historic condition of an object,” Camus warned. “But if he dies in refusing to be enslaved, he reaffirms the existence of another kind of human nature which refuses to be classified as an object.”

The rebel, for Camus, stands with the oppressed—the unemployed workers being thrust into impoverishment and misery by the corporate state, the Palestinians in , the civilians in and , the disappeared who are held in our global black sites, the poor in our inner cities and depressed rural communities, immigrants and those locked away in our prison system. And to stand with them does not mean to collaborate with parties, such as the Democrats, who can mouth the words of justice while carrying out acts of oppression. It means open and direct defiance.

The power structure and its liberal apologists dismiss the rebel as impractical and see the rebel’s outsider stance as counterproductive. They condemn the rebel for expressing anger at injustice. The elites and their apologists call for calm and patience. They use the hypocritical language of spirituality, compromise, generosity and compassion to argue that the only alternative is to accept and work with the systems of power. The rebel, however, is beholden to a moral commitment that makes it impossible to stand with the power elite. The rebel refuses to be bought off with foundation grants, invitations to the White House, television appearances, book contracts, academic appointments or empty rhetoric. The rebel is not concerned with self-promotion or public opinion. The rebel knows that, as Augustine wrote, hope has two beautiful daughters, anger and courage—anger at the way things are and the courage to see that they do not remain the way they are. The rebel is aware that virtue is not rewarded. The act of rebellion defines itself.

“You do not become a ‘dissident’ just because you decide one day to take up this most unusual career,” Vaclav Havel said when he battled the communist regime in Czechoslovakia. “You are thrown into it by your personal sense of responsibility, combined with a complex set of external circumstances. You are cast out of the existing structures and placed in a position of conflict with them. It begins as an attempt to do your work well, and ends with being branded an enemy of society. ... The dissident does not operate in the realm of genuine power at all. He is not seeking power. He has no desire for office and does not gather votes. He does not attempt to charm the public. He offers nothing and promises nothing. He can offer, if anything, only his own skin—and he offers it solely because he has no other way of affirming the truth he stands for. His actions simply articulate his dignity as a citizen, regardless of the cost.”

Those in power have disarmed the liberal class. They do not argue that the current system is just or good, because they cannot, but they have convinced liberals that there is no alternative. But we are not slaves. We have a choice. We can refuse to be either a victim or an executioner. We have the moral capacity to say no, to refuse to cooperate. Any boycott or demonstration, any occupation or sit-in, any strike, any act of obstruction or sabotage, any refusal to pay taxes, any fast, any popular movement and any act of civil disobedience ignites the soul of the rebel and exposes the dead hand of authority. “There is beauty and there are the humiliated,” Camus wrote. “Whatever difficulties the enterprise may present, I should like never to be unfaithful either to the second or the first.”

The capacity to exercise moral autonomy, the capacity to refuse to cooperate, offers us the only route left to personal freedom and a life with meaning. Rebellion is its own justification. Those of us who come out of the religious left have no quarrel with Camus. Camus is right about the absurdity of existence, right about finding worth in the act of rebellion rather than some bizarre dream of an afterlife or Sunday School fantasy that God rewards the just and the good. “Oh my soul,” the ancient Greek poet Pindar wrote, “do not aspire to immortal life, but exhaust the limits of the possible.” We differ with Camus only in that we have faith that rebellion is not ultimately meaningless. Rebellion allows us to be free and independent human beings, but rebellion also chips away, however imperceptibly, at the edifice of the oppressor and sustains the dim flames of hope and love. And in moments of profound human despair these flames are never insignificant. They keep alive the capacity to be human. We must become, as Camus said, so absolutely free that “existence is an act of rebellion.” Those who do not rebel in our age of totalitarian capitalism and who convince themselves that there is no alternative to collaboration are complicit in their own enslavement. They commit spiritual and moral suicide. 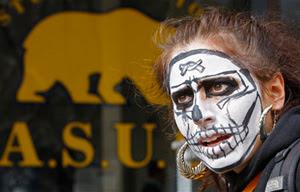 Student Natalia Garcia protests last week on the campus of the of at during a day of nationwide demonstrations against cuts in education funding.

Posted by Max Obuszewski at 1:57 PM