In Colorado, Occupy Fort Collins Demonstrators Dig In; No Plan to End Protest

Published on Wednesday, October 12, 2011 by Coloradoan.com

In , Occupy Demonstrators Dig In; No Plan to End Protest

Occupy is sticking around. 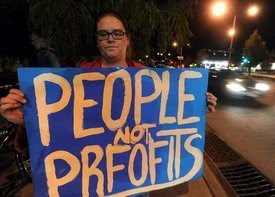 Bonnie McWethy of joins the Occupy Fort Collins 24/7 protest. Police have said the demonstration can continue on public property as long as no one sets up tents or appears to be camping. After assembling at noon Monday, the group has moved into "indefinite" protest mode at the corner of College and Jefferson avenues in . Protesters spent their second night out last night.

Police say the group is permitted to stand on public property as long as no one camps or sets up tents.

Piggybacking on the better-known , a variety of "Occupy" groups have sprung up around the country. The loosely organized groups are protesting the power of the financial and government sectors and say they represent the "99 percent" of people who are upset and frustrated by the current political and economic system.

"This country was founded on the basis of us looking out for each other," said protester and musician Eric Eisen, 30, "We should be taking better care of each other."

The protesters include retirees, college students and the unemployed. There's no formal leadership, and all decisions are made by whoever shows up during nightly "General Assembly" meetings managed by hand signals. Tuesday night's meeting drew about 50 people.

Among those attending Tuesday night's general assembly was Pye Schure, 16, who said she's frustrated that so much wealth is controlled by so few people. She said too many wealthy people win public office, and the system seems set up to ensure that they stay there.

"I think it's amazing that people are finally understanding that corporations are buying our politicians," Schure said.

Her brother, Zane, 20, said he's frustrated that while corporations rake in huge profits, they pay little or no taxes, especially when so many regular people are struggling just to get by.

Sam "Banjo Sam" Bodanny, 67, apologized to the group on behalf of his generation, which he said got "blinded" by a focus on families and work, and not on each other. Bodanny said he's participated in many protest movements during the years and has been struck by how good-hearted the "Occupy" movement is.

"Don't ever lose your idealism," he told the group. "You must carry on. This is your life."