The National Campaign for Nonviolent Resistance will host a planning meeting for the protest at the NSA on Sun., Oct. 9.  The plan is to meet at St. Stephen’s and the Incarnation Episcopal Church, , WDC, 20010, from 3 to 5 PM on Saturday to finalize details for Sunday's visit. Please RSVP to Max at 410-366-1637 or mobuszewski @ verizon.net.

If you can’t make the planning meeting, but hope to join us on Sunday, please let me know.  Also we need someone to do a banner.  Thanks.

Published on Friday, October 7, 2011 by McClatchy

— A sun-soaked noon rally within blocks of the White House brought out hundreds of protesters Thursday to mark the 10th anniversary of the War. 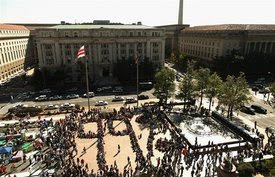 About one thousand people gather and form a large "99%" in the middle of during an "occupation" of the plaza October 6, 2011 in . Inspired by the movement that began last month in , large and small occupations have sprung up in cities across the country. (Photograph by: Chip Somodevilla, Getty Images) On , sign-carrying demonstrators banged drums, sang and cheered a series of fiery speeches by anti-war activists, who decried the federal government's continued funding of the Afghan and Iraqi wars while calling for cuts to social programs for the elderly, poor and people with disabilities.

Planning for the rally began six months ago, but the event's timing dovetailed perfectly with nationwide protests in support of the ongoing demonstration in . There were similar protests against income inequality and perceived corporate profiteering Thursday in , , , Houston and other cities.

During a morning news conference, President Barack Obama said little about the Afghan War entering its 11th year, but he did give a shout-out to the growing wave of protests.

"I think people are frustrated and, you know, the protesters are giving voice to a more broad-based frustration about how our financial system works," he said.

That sentiment was shared by a protester who identified herself only as Andrea E., a single mother of two who is facing foreclosure on her home in the area.

She said a divorce and a loss of hours on her waitressing job made it impossible to keep up with her mortgage. Her bank lowered her monthly payments while it considered a loan modification. Ultimately, however, it refused to do so and demanded that she pay the past-due amount, about $4,000.

"I refuse to give them another dime until they modify my mortgage," she said, arguing that she was never late with a payment. After attending the Wall Street rally in , Andrea, 34, said she's hoping for a "peaceful revolution" in which corporations - such as her bank - grow hearts.

"I'm sure that's not going to happen anytime soon, but I hope it does," she said. "We need the middle class to be back where it should be and not dwindling away like it is."

Bo Considine, a 60-year-old business analyst from , took the day off to join the protest. Considine said he was upset that the tax system treated corporate profits more favorably than it did income from labor. And in a reference to the tea party movement, Considine said he was tired of watching the squeaky wheels get all the grease.

"I can't put up with having my voice shouted down anymore and having those people who behave most aggressively and uncompromisingly set and maintain the agenda. I feel like this is the beginning of the silent majority finally saying enough is enough," Considine said.

Civil rights activist and comedian Dick Gregory spoke at the rally, saying the demonstrators reminded him of the young anti-war protesters in the late 1960s, who were emboldened by the civil rights protests.

While not intending to capitalize on the demonstration, Benjamin said Thursday's rally shared a common thread with the now-famous protest: "Corruption of Wall Street spills over to corruption on ," she said.

In a statement Thursday, Chai Ling, who was the commander in chief of the 1989 student democracy movement that organized China's Tiananmen Square uprising, said the youth and passion of America's protesters matched that of the young Chinese who ultimately gave their lives for liberty in China.

"The momentum of this protest is built around a longing for Wall Street and 's leadership to stop focusing on corporate greed and solely on the bottom line," she said. "It is a plea for to be restored to a moral compass that will guide leaders to care for the poor and seek justice."

These movements are grassroots. Yet it is correct to be concerned that they will be coopted or more correctly there is now a great effort to coopt them because they are a real threat to the establishment if not coopted.-------- Having spoken to a local organizer, I know that some are simply politically naive, no knowledge of Fusion Centers, believes Oilybomber is not as bad as a Repug even though he/she is aware that the nation is now Fascistic--------- So again as always political education is core to victory.

I am concerned as well. It would be reassuring if the Occupy Movement declared itself independent of the Sold Our Souls party. I do get the sense that many in the movement understand there is no solution in either side of the duopoly. Hopefully, the movement will call for accountability and support of action, rather than simple talk. Although, isn't it already too late as the global financial system domino fall is assuredly on the horizon? The government will enevitably wash their hands in the scapegoating of the financial terrorists. Hopefully the Occupy movement can be the ones to remind the government they've been waking up on the same side of the bed as the banks these past few decades.

Well I was there. Im 56. I watch seniors back in the late 60's graduate to . My Older sister was at the Moritorium in 1969. As a student at the of and was involved with blocking off Rt. 1 in 1970 after Nixon Sent Troops into . It was great to be at the Start the Revolution gathering on Wednesday evening and helping with set up as well as holding a sign an waving to the folks passing by on I had to leave at noon to head for my home on the . I had night shift to get ready for. I will return. If you haven't been go down to or or wherever show your support.

And if you can't get to an OWS protest, send the participants money and other resources to help them through the winter. If you are a union member, tell your union leadership to stop sending money to the Democratic Party and redirect those funds to help OWS get through the winter.

gnken1 wrote: .Well I was there. Im 56. I watch seniors back in the late 60's graduate to . My Older sister was at the Moritorium in 1969. As a student at the of and was involved with blocking off Rt. 1 in 1970 after Nixon Sent Troops into . It was great to be at the Start the Revolution gathering on Wednesday evening and helping with set up as well as holding a sign an waving to the folks passing by on I had to leave at noon to head for my home on the . I had night shift to get ready for. I will return. If you haven't been go down to or or wherever show your support.

Thank you for protesting in !

"Corruption of Wall Street spills over to corruption on ," she said.

And then we have Mr. Pro-Corruption himself saying:

"I think people are frustrated and, you know, the protesters are giving voice to a more broad-based frustration about how our financial system works," he said.

Hey, Obama, you, sir, are part and parcel of "how our financial system works," you hypocrite. Look around you. Looks like your base had somewhere to go, after all: they decided to go to the streets all over .

The Financial system does not know what work is.It never worked. It never will. It is a parasite on the back of the worker.

"A sun-soaked noon rally within blocks of the White House brought out hundreds of protesters Thursday to mark the 10th anniversary of the War."

It is good that the wars in Afghanistan/Pakistan and are brought up at some of these rallies. The latest developments in are worrisome if not outright dangerous and the Obama administration must not be given the benefit of a news-smoke-screen behind which it can do in whatever it pleases. What is happening with , in short, is this. Obama wants to keep tens of thousands of so-called "trainers" in after December 31 of this year, the date at which they and their civilian "helpers" paid by the Defense Department must be legally out of . He demands that both remaining soldiers and civilian "helpers" must be immune from prosecution by 's courts under a new SOFA agreement. The people, Government, and Parliament of say: "no way this time; we remember Abu Graib even if you do not". If Obama does not cave to the demands of the people of Iraq to get a new SOFA agreement before December 31 of this year but wants to keep troops in Iraq illegally after the deadline he will not only violate a U.S. law (the current SOFA-Iraq) but he will have re-started a real war with Iraq. The government of recognizes this and has already stated that its armed forces are then allowed under international laws to kill American soldiers and their civil "helpers". What a way to start a new war on the sly! Don't let him get away with it and demand that all troops and their "helpers" must be out of by the deadline as specified by SOFA-Iraq. While such a demand may not satisfy 99% of our nation it does satisfy a great majority of it. What are you waiting for on Wall Street? And Common Dreams, your obligation is to keep telling the truth about every day.