Guantanamo: A Cold Sore on the Face of America

: A Cold Sore on the Face of 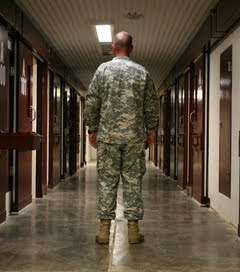 An Army spokesman in one of the detainee areas in Camp Delta at Bay, , on June 9, 2010. (Photo: Richard Perry / The New York Times)

Recently, the Kuwaiti Prime Minister, Sheikh Nasser Al-Mohammad al-Ahmad Al-Sabah, traveled to the and, in a meeting with Vice President Biden, once again asserted 's interest in seeing its two remaining citizens (Fayiz Al-Kandari and Fawzi Al-Odah) returned from 's island prison in Guantanamo Bay (GTMO). While I applaud the prime minister addressing this issue, virtually identical appeals from have fallen upon deaf ears for more than a decade.

And now, even more menacing obstacles to justice loom on the horizon in the form of indefinite detention and the 2012 National Defense Authorization Act. As a result, time is a luxury Fayiz and Fawzi can no longer afford ... and patient diplomacy is no longer a viable option.

Of the 775 prisoners originally confined under inhumane conditions at GTMO, approximately 600 have been released without being charged with any crime or ever setting foot in a courtroom. Of the remaining 171, another 90 have been cleared for release without trial. This leaves approximately 81 prisoners whose fate remains undecided. Of those, the claims it will provide trials to approximately 30 individuals (less than 4 percent of those it saw fit to confine). The rest will continue to be imprisoned at GTMO, without trial, under President Obama's officially-authorized policy of "indefinite detention." Unfortunately, despite the prime minister's most recent appeal, Fayiz and Fawzi will likely fall into this final group and be detained without trial for the rest of their lives.

Moreover, the United States Congress is currently on the eve of passing the 2012 National Defense Authorization Act (NDAA), which, in its present form, recognizes the war on terror as never ending and codifies President Obama's indefinite detention scheme. Perhaps more importantly, however, the proposed NDAA would prohibit the from returning any GTMO detainee (regardless of guilt or innocence) to any country that has previously had a former GTMO detainee re-engage in "terrorist" activity.

Consequently, even if Fayiz and Fawzi conclusively prove their innocence, they will nonetheless remain imprisoned at GTMO, because a single Kuwaiti, released without trial by President Bush in 2008, allegedly became a suicide bomber in . Thus, if the proposed NDAA passes, Fayiz and Fawzi will serve a life sentence for an offense committed by another man.

Confinement without trial ... and punishment for another man's offense. It is difficult to imagine a scenario less consistent with American ideals.

As a result, I implore the Kuwaiti government not to treat GTMO as just another issue to be resolved through patient diplomacy. The ' detention policy has become so irrational that polite appeals cannot possibly succeed. Rather, must view the as one might view a family member addicted to a powerful substance (in this case fear, paranoia and political pandering). Only immediate and consequential intervention can possibly resolve the problem. As 's strongest ally in the Middle East, is the only partner capable of such intervention.

The views expressed in this article do not represent the views of the Department of Defense or the government. Lt. Col. Barry Wingard is a military lawyer who represents Fayiz al-Kandari and has served for 27 years in the military. When not on active duty, he is a public defender in the city of .