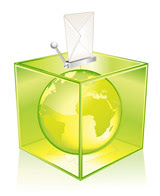 Please remember to vote on November 2, and please – vote your planet!

Please vote for the environment and urge your friends to do the same.

Forward these 12 Environmental Facts to 5 friends.

12 Environmental Facts to Keep in Mind on Election Day

389 – The concentration in parts per million of carbon dioxide, a leading greenhouse gas, in the earth's atmosphere today.

16 – Estimated number of Exxon Valdez-sized spills it would take to equal the amount of oil spilled into the Gulf after the BP Blowout.

4,342 – Total number of oiled birds collected by the U.S. Fish and Wildlife Service in the region.

$514 million – Amount spent on lobbying and advertising by big polluters to stop the Senate from passing global warming legislation.

23,000 – Number of Americans whose lives will be saved in 2010 alone because of the Clean Air Act, according to EPA estimates.

1 – The number of votes it takes to decide a close election.

Posted by Max Obuszewski at 9:30 AM