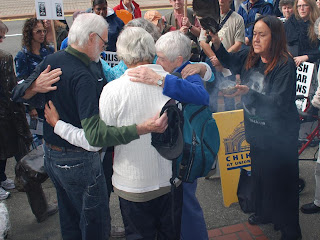 who entered the Navy's nuclear weapons storage depot in

in November 2009 had their initial day in court.

Over eleven months since they entered the Navy’s nuclear weapons

storage depot at to symbolically disarm the nuclear

Bichsel, SJ, and Susan Crane were all present to enter their pleas

The government brought many serious charges against each of the Disarm

They include Conspiracy, Trespass, Destruction of Property on a Naval

Installation and Depredation of Government Property.

The major consequences for the various individual charges range

fines, as well as up to 3 years of supervised release, and/or up to 5

Additionally, the judge made it clear that should the defendants be

convicted on multiple charges, the court could order them to serve

All defendants entered pleas of “not guilty”, to which each defendant

Greenwald called "for the end of all wars, and an end to the threat of

nuclear war."  Crane made “a plea for the abolition of nuclear

weapons, for the children of future generations.”

weapons because of funding going for weapons of mass destruction

instead of health care, education, housing, employment and nutrition.

and Memo in Support”.  The judge said that she would not hear it, and

could not rule on it in these proceedings.  After the arraignment,

Crane filed the motion for dismissal, and two others, with the clerk

In their motion for dismissal the co-defendants conclude that,

“Because this case involves unjust and illegal weapons of mass

destruction, the use of which is a war crime under US and

international law, and defendants actions were taken to protect a

violating, this case should be dismissed immediately.”

War Crime under US Law, and state that “Any threat or use [of nuclear

weapons] is categorically prohibited and constitutes a war crime,

crime against humanity or genocide as defined consistently by the

October 1907, which applies because nuclear weapons are incapable of

distinguishing between civilians and combatants and cause unnecessary

are committed by anyone who “participates in a common plan or

conspiracy for the accomplishment of planning preparation, initiation

Their last reference used to substantiate that the use of nuclear

“the use of nuclear weapons can also be considered genocide because

the weapons destroy, in whole or substantial part, groups of people,

The five Disarm Now co-defendants firmly believe that there is

sufficient legal doctrine substantiating their invocation of the

necessity defense, and that the “Defendants’ actions are just and not

at all illegal,” and therefore the case should be immediately

During the arraignment all of the Disarm Now defendants stated that

nation’s production, maintenance and preparations for the use of

nuclear weapons during their upcoming trial.

in front of the courthouse to stand vigil, hand out leaflets

There have been more than 100 Plowshares Nuclear Resistance Actions

worldwide since 1980. Plowshares actions are taken from Isaiah 2:4 in

Old Testament (Hebrew) scripture of the Christian Bible, “God will

judge between the nations and will settle disputes for many people.

pruning hooks. And nations will not take up swords against nations,

nor will they train for war anymore.”

The Trident submarine base at , just 20 miles west of ,

2006, the Natural Resources Defense Council declared that the 2,364

nuclear warheads at are approximately 24 percent of the entire

arsenal.  The base houses more nuclear warheads than

accurate Trident D-5 missile system.  Each of the 24 D-5 missiles on a

Trident submarine is capable of carrying eight of the larger 455

force as the bomb) and costs approximately $60 million.  The

The Disarm Now defendants’ “Motion To Immediately Dismiss Charges and

Memo in Support” is attached to this release.

Also attached is a photo of the pre-arraignment interfaith service.

the five Disarm Now Plowshares co-defendants before their arraignment.

Further information on Disarm Now Plowshares is available at