A Sunday with Vanunu 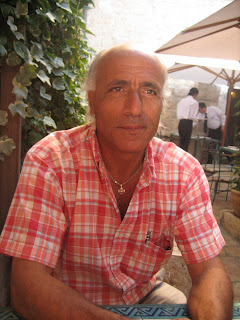 A Sunday with Vanunu  eileen fleming

Occupied East Jerusalem, June 15, 2009- Mordechai Vanunu and I, first crossed paths on the first day of summer in 2005, which was five days before my return to the USA from my first 16 Days in Israel Palestine [1]

On my last evening of my seventh trip to occupied east , Vanunu and I had a drink at the American Colony. Vanunu had a Taybeh beer, which is produced in the last remaining self-sufficient and last remaining Christian village in the entire .

I ordered a Vodka tonic and Vanunu warned me, that I should never have more than one shot a day. I replied, it was only my first and I had my last in the taxi on my way to . I knew it would be hours before I cleared SECURITY and the game we played  had gotten tiresome for me- and I imagine it a death unto them who make a paycheck for interrogating those who are Telling the Truth at Ben Gurion... [2]

For the first eight days of my ten day trip, I was embedded with CODE PINK activist's, but missed their June 14th demonstration during Israeli Prime Minister Benjamin Netanyahu's speech at against ’s invasion of , illegal settlements and the apartheid wall.

"Heavy handed police treatment of the CODEPINK: Women for Peace delegation began immediately after members of the group unfurled several pink banners that read “Free Gaza” and “End the Occupation.”  CODEPINK co-founder Medea Benjamin and New York activist Zool Zulkowitz were physically dragged across the street…A French journalist who was a member of the CODEPINK delegation, was arrested as she crossed a small street in an attempt to take photos of the demonstration…Israeli police and military violently shoved the group back into a wall. Delegation member Tighe Barry from was struck in the face with the butt of a military rifle and pushed to the ground…he was treated for a concussion, an injured neck and an asthma attack.

“Is this the great democracy that the taxpayers pay for with $3 billion dollars a year?” cried Medea Benjamin as she was being dragged away by the police."- Ann Wright, retired US Army Reserves Colonel, former diplomat, CODE PINK activist who has visited three times in the past three months, co-leading two delegations of over 120 committed justice and peace activists.

Although I missed all that action, I had the blessed opportunity to reconnect with Vanunu after suffering a major failure of communication last year; and now, that is all water under the bridge.

Vanunu admitted, "I was isolating myself from my supporters" but the times have changed and he is meeting with anyone who stops by his table between the hours of 3-5 PM, in the garden restaurant of the American Colony, in occupied east . I arrived at 5:30 to attend a book reading with him and he informed me that Tony Blair had rented the entire second floor for one million a year and Jimmy Carter was at the moment having a meeting with Uri Avnery and Adam Keller.

I laughed out loud- but not surprised- and replied, "In a way, someone does tell me what to write down. I only write what I hear in my heart and that is where I hear God; what ever He-She is, I don't know, but I have no doubt That Mystery is guiding me. Everything is connected and God is within every situation."

Vanunu leaned back and scanned the garden, then leaned in and said, "I don’t really know you."

I laughed again and replied, "Anyone can. Just read KEEP HOPE ALIVE."

The day before, I had given him a copy inscribed that he appears on page 102 and throughout Chapter 11, and I speak through Jack, Jake, Terese, Brother Harold, Kat and Riad.

However, it was Vanunu who inspired me to became a citizen journalist, and three weeks after my first trip to occupied east Jerusalem I established my website and have been reporting from day on Vanunu's historic FREEDOM of SPEECH trial in the 'democracy' of Israel which began on January 25, 2006.

On July 2, 2007, sentenced Vanunu to six months in jail for speaking to foreigners-who happened to be media- in 2004.

Vanunu began talking the day he emerged from 18 years in a tomb sized cell, on April 21, 2004. He was sentenced for treason, but all he did was tell the truth and provide the proof that had already manufactured of upwards of 200 nuclear warheads by 1985.

Two days before President Bush's first trip to , and a day before Vanunu's appeal was to begin, sentenced him to community service. does not recognize occupied as part of their community, but it is the only neighborhood that Vanunu has lived since April 21, 2004.

denied Vanunu the right to serve the sentence in his own community, but on September 23, 2008, the Jerusalem District Court announced:

"In light of (Vanunu's) ailing health and the absence of claims that his actions put the country's security in jeopardy, we believe his sentence should be reduced."

Reuters quoted his attorney, Michel Sfard, "Vanunu was convicted by the Jerusalem Magistrates Court of 15 violations of a military order prohibiting him from talking to foreign journalists and leaving .  The original indictment included 22 different violations of the order, but during the trial the State Prosecutor's Office submitted an amended indictment, and he was eventually charged with 19 violations and was acquitted of four. According to the indictment, Vanunu held conversations with foreign journalists and provided them with news and details on 's nuclear reactor. He was acquitted of speaking to foreign nationals on the internet and via video and voice chats…Since his release Vanunu has campaigned for the Jewish state to be disarmed while denying Israeli officials' charges that he has more secrets that he could divulge if allowed to emigrate. We should be clear here that Vanunu was convicted for the very act of speaking to non-Israelis, rather than the content of those conversations. We do not consider this appropriate for a democracy in the 21st century."  [3]

"My lawyer succeeded to reveal a few very important facts:

1.      This General of the Army also was not allowed to see all the secrets that he is required to protect by these restrictions that they claim I know them. So, he gave orders of restrictions without knowing what he is protecting or that he is also following orders blindly, and Mossad Sheen Bet using its authority for just punishing me.
2. He testified that it is not a crime for me to talk with foreigners in general anywhere.
3. He testified that I can speak freely to any Israeli citizens about anything; it is not his concern what I am saying to them. These Israelis can give this information to any foreigners. It was difficult for the Judge to understand why this dichotomy exits between foreigners and Israelis. It means that it is not about secrecy but about something else."

Something else indeed, is how Vanunu has endured the last twenty-three years: Opera:

"Opera inspires me, it gives me strength. When I was twenty-two I stopped listening to pop; The Beatles, Cat Stevens, Bob Dylan. I like challenges and began listening to opera. It builds skyscrapers in my mind. Opera is nutrition for the brain. Opera enlarges and develops the brain. Opera speaks to my brain…Every morning I am in my room until eleven listening to opera. I find ways to enjoy myself as my way of resistance. I transform anger into positive energy."

Vanunu also vents his righteous rage in daily 2 ½ hour walks at the most brutally hot hours of the day as he travels the streets of occupied East Jerusalem to the checkpoints at , Qalandyia and Lazarus' Tomb.

Every Wednesday he plays coed volleyball and has dinner with the community of the of the Redeemer in the , where he has been a member for the last three years. Every Sunday, Vanunu attends the English and then the German service because he likes the music.

I attended both services with him and then we had lunch on the roof of Papa Andreas restaurant. I reminded Vanunu of the lunch we had there last November on the final day of Sabeel's Nakba Conference: Read more... [4]

Vanunu had consented to give a video interview update, but he was a no show on the roof where the videographer had set up to tape. Vanunu now admitted, "I was isolating myself from my supporters…I have felt bitter and held a grudge. But I realized that is not helping me. I am pragmatic and I will do what serves me and others.

"They renewed the restrictions to not speak to foreigners until November. I meet foreigners every day. I am talking with people every day. But I am not writing or announcing the appeal until after it happens. It was scheduled for January, then May 6th and June 18th. Now, I am waiting for a new court date.

"The Central Commander of the General Army testified in court that it is OK if I speak in public as long as I do not talk about nuclear weapons.

"I think the court will realize even if they send me back for three months-what will they do after that?

"It is all about freedom of speech and they cannot keep me here forever…They want revenge because I survived the system…The isolation in prison made me feel like I was loosing my mind. I felt like I was dieing.

"Jesus Christ's strong message to the Israelis of 2,000 years ago is that they were wrong in rejecting him. By going to church I am reminding Israel of JC. JC and I both did a good job for humanity.

"Obama needs to wake up and talk and walk. But has lost eight years. needs to free itself from the Israeli state. Five million Jews should not dictate to what they shall do.

Eileen Fleming, is the Founder of WAWA: http://www.wearewideawake.org/
Author "Keep Hope Alive" and "Memoirs of a Nice Irish American 'Girl's' Life in "
She produced "30 Minutes With Vanunu" and "13 Minutes with Vanunu" because corporate media has been MIA all during a Freedom of Speech Trial in .
--
Only in Solidarity do "we have it in our power to begin the world again."-Tom Paine