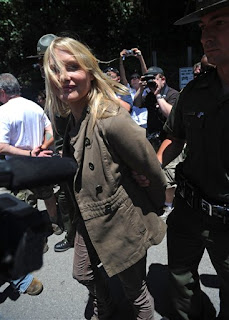 Coal industry advocates and environmentalists converged on Capitol Hill on Thursday at a congressional hearing on the impact of mountaintop removal mining on Appalachian streams and rivers.

The coal industry has long held that this method of mining, which involves blasting the tops off mountains to reveal the underlying seams, is the most economical way of extracting coal. Environmentalists decry the destruction of Appalachian forests and streams and the coal waste runoff that often seeps into the surrounding water supply.

The Obama administration has vowed to change mountaintop removal mining practices, and in March the Environmental Protection Agency cited a proposed mine in Kentucky and one in West Virginia as examples of areas with particularly environmentally hazardous "valley fills," or areas where mountain streams are covered with rock and dirt that have been blasted away to reach seams of coal.

The EPA has pledged to review other mining permits, using "the best science" and following "the letter of the law" - moves that could delay the issuing of mining permits and require revisions to those permits.

However, the Obama administration stopped short of calling for an end to mountaintop removal. Environmentalists and some members of Congress would like to see an outright ban.

That would be a disaster, according to the National Mining Association.

"At a time when we are spending billions of taxpayer dollars to create jobs, it is inconceivable that some in Congress would attempt to destroy some of the highest-paying jobs in American industry," said Hal Quinn, the association's president and chief executive, in a statement Thursday.

Though activists from across the country wearing T-shirts that read "Friends of Coal" and "I Love Mountains" packed the hallways and the committee hearing room, the sharpest dialogue and tension took place among committee members who hail from coal-producing states and their colleagues.

"There is no denying coal's significance to the culture and economy of ," said Sen. Benjamin Cardin, D-Md., chairman of the Senate Environment and Public Works water and wildlife subcommittee. "However, mountaintop coal mining is a long-term assault on 's environment, economy, culture and the health of its citizens."

Cardin and Sen. Lamar Alexander, R-Tenn., are sponsoring legislation that would outlaw mountaintop mining. The bipartisan proposal puts them at odds with fellow committee member and the subcommittee's ranking Republican, Oklahoma Sen. James Inhofe, who says the legislation would result in job losses and higher electricity prices.

Nearly half the nation's electricity comes from coal.

"I'm concerned about the infighting among Democrats when it comes to coal," Inhofe said, referring to battles within the Democratic Party over how to best cap greenhouse gas emissions and whether to ban mountaintop removal mining.

After weeks of tense back and forth and internal disputes, House Democrats may be poised to push through historic climate-change legislation in a few days.

The brewing debate over banning mountaintop removal mining could reignite those tensions.

"The administration's decision will bring tighter scrutiny, but it is still important to pass the Cardin-Alexander legislation that would prohibit blowing off the tops of mountains and putting the waste in our streams," said Alexander, a committee member. "Coal is an essential part of our energy future, but it is not necessary to destroy our environment in order to have enough of it."

The battle between environmentalists and mining advocates has been in the news this week.

On Monday, the Supreme Court ruled that the Idaho-based Coeur d'Alene Mines Co. could throw waste from an gold mine the company owns into nearby , even though environmental experts suggest doing so would kill the lake's fish.

The ruling clears the way for the company to build a mining facility north of - a move that could bring more than 300 jobs to the area. Alaska Gov. Sarah Palin and Sen. Lisa Murkowski, R-Alaska, hailed the ruling as a victory for the state.