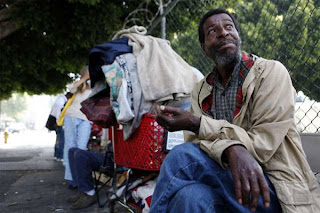 had the final word, for a moment at least, 'the universe bends toward

It looked like an anti-terrorist takedown: five cop cars, 10 police

officers, a yellow skip loader and a 5-ton dump truck. They screeched

downtown . But their target this spring was not a suicide

bomber or a hidden nuclear device; it was the four red shopping carts

parked in front of our building. Those of us who had worked on skid

row for a while were not surprised; we'd seen it all before.

patrol the streets of skid row to confiscate the unattended

excessive or simply trash. Often these sweeps would take medication,

identification papers and family photos, the last vestiges of past

Between 1989 and 2005, three lawsuits, two by civil rights attorney

Carol Sobel, were filed and won in state and federal courts against

the city of regarding the rights of the homeless. As a

result, the police are required to give sufficient notice before

removing property of the homeless, and the city must pay damages to

homeless people for possessions that had been taken and dumped rather

than stored for a certain length of time.

Despite these court victories and the periodic interdiction of

homeless activists, the city and police have continued their policy of

what amounts to theft from the homeless.

Like a battle-weary soldier who has seen too much, you can get a hard

heart. But on this particular occasion, one of our volunteers from the

suburbs observed the entire episode and was shocked. "Can't we do

something about this?" Richard asked. "They just took everybody's

stuff. They were just eating lunch and when they rushed out to grab

their shopping carts, the police said, 'No, this is abandoned

It's always unsettling for our volunteers from the suburbs. They think

the rules that apply there should apply on skid row. But that's not

how it works. Despite those court cases, if you are gone for five

minutes to wash, eat or relieve yourself, you can lose all of your

possessions. If you leave a friend in charge of your shopping cart and

gone to the city dump. I felt like the cop in that old Jack Nicholson

movie. I imagined myself saying to our volunteer, "Forget it, Jake.

bother to contact Carol Sobel about the incident. Fortunately, others

did. She came, took depositions, collected photos and went back to

I was heartened but did not have high expectations for the hearing.

The way city officials and police tell their story of skid row,

everyone on the streets is either a drug addict or a dealer, and those

or property. So in June, when we gathered in the august federal

courtroom, I was expecting an affirmation of police impunity.

announcement that Judge Philip Gutierrez made: Before we begin today,

Catholic Worker soup kitchen. I chopped onions, I served food and I

cleaned toilets. But I have had no contact with them since. Therefore

I see no reason to recuse myself from this case.

Whoa! Our jaws dropped. At the end of the court day we got the federal

injunction halting the seizure and destruction of the personal

property of the homeless. The judge ruled that homeless individuals

have an expectation of privacy in their property, even if left on the

sidewalk for short periods. Richard was elated. For him, it confirmed

that the system works. I was in a state of shock. Where did this come

We are all formed by our individual life experiences. We are raised

Republican or Democrat; Protestant, Jewish or Catholic. But Gutierrez,

however improbably, appears to have been formed in some measure by his

experience of chopping onions, cleaning toilets and serving food to

the homeless at the Catholic Worker soup kitchen.

I'm not saying that's the only reason he ruled the way he did, but

from the perspective of those of us who work with the homeless, and

the perspective of the homeless folks who push shopping carts

containing the last of their earthly treasures, it is like one of

authorities have the final word, just when you think that the rules of

the suburbs cannot possibly apply on skid row, for a moment at least,

Byline for attached photo: Eric Hill, age 48, says he sits on the same

Jeff Dietrich is a member of the Los Angeles Catholic Worker

http://lacatholicworker.org/ and has worked on skid row for 40 years.

His most recent book, "Broken and Shared: Food, Dignity, and the Poor

on ' Skid Row," will be published this fall.