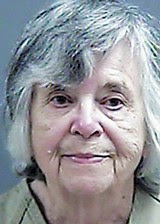 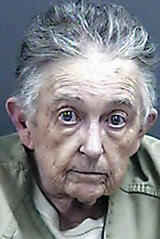 there was a court hearing this morning in regarding jackie

's release. jackie was unable to attend, but her lawyer, brad

henry, requested her release and the judge granted it providing she

accepts the conditions. at this point, her lawyer, the marshal, and

the probation officer are on their way to the hospital. after jackie

signs the papers and they return to the judge, she will be officially

them which hospital she is in. it's not clear if she is in any

condition to leave the hospital, but at least we'll be able to sit with her.

the news-sentinel is running a piece on jean's release;

for now (see story and link below).

more when we know it.

One of the dozen anti-nuclear activists convicted last month of

misdemeanor trespassing on federal property in has been

A second one may be released today.

Jean T. Gump, who recently turned 84 and had petitioned for release

for health reasons. Today, Guyton will review a similar petition by

Jacqueline Hudson. The Attorney's Office has indicated it will

to jail immediately following their convictions in May.

be revoked if she engages in any activity that gets her arrested.

"That has happened to another defendant in this case," the judge said.

Gump agreed to abide by all conditions of her release.

Gump, Hudson and 10 others were arrested last year when they crossed

protest nuclear weapons policies. All 12 were convicted. A 13th

defendant is to be tried later.

Guyton has said he will sentence each protester individually.

Posted by Max Obuszewski at 2:48 PM