Join Pledge on First Thursday/Read this & remember that this is the USA, not Iran: "Fr. Bill Bischel's ordeal: Cruel and inhuman punishment" by John Dear SJ - NCR 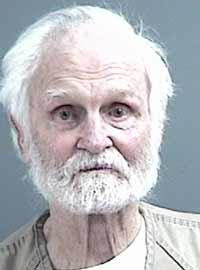 The Pledge of Resistance-Baltimore will host an End the Wars vigil on Thurs., June 2 from 5 to 630 PM in at Centre & Charles Sts.  The Pledge gathers in on the first Thursday of the month to protest wars.  Call Max at 410-366-1637

"cruel and inhuman punishment" was not a surprise -- except in the

sense that it was said publicly. Many of us who have experienced our

criminal injustice system first hand know well how horrific it is. The

court ruled that 35,000 prisoners would have to be

transferred or released because the system is so unjust.

prisoners suffer in prisons built for half that number),

in 's prisons. Many prisoners died needlessly over the

years, usually because they were not given their medicine.

It's not surprising either that our violent, imperial nation has the

highest documented incarceration rate in the world. The most recent

"war on drugs" and mandatory sentencing laws against nonviolent

offenders are partly to blame for this huge prison population.

Prison is bad for one's health, to put it mildly. During my last stint

in the Jail for the Creech 14 action, I was stunned as the

in chains or handcuffs, yelled at us and threatened us. Then, she

ordered an officer to beat up one prisoner, and he threw him against

the wall. Nobody blinked.

Certainly one of the worst places I've ever been is the

Jail in near the border. Built for 75

for our Plowshares action. One human rights report claimed that over

25 people had died in the five years previous to my stay. Most of them

had been denied medicine, and were simply found dead the next morning.

Philip Berrigan and I had befriended. He was in the cell across the

hall from us. We occasionally talked. He told us of his heart

condition. We saw pills delivered to him every day. About a month

after our transfer to another jail, we received word that he had died.

He had argued with a jailer, so the jailer did not give him his

medicine, and he died that night.

This week, many of us will gather in to celebrate the

release of Franciscan Fr. Louie Vitale after his six months in prison

for protesting the " of ," our assassination and

terrorism school at Louie's in fine fettle, as

determined as ever to do what he can to resist our wars and weapons.

We go to honor his indomitable spirit (See www.paceebene.org).

since Obama's inauguration, over 2,600 people have been arrested for

similar acts of nonviolent civil disobedience against war and

injustice, a stunning number given the total lack of media coverage on

peace and justice movements. As our prisons continue to worsen, it's

amazing that activists are willing to risk imprisonment for social

At the moment, some friends are currently languishing in and

jails for civil disobedience at the Y-12 nuclear complex at

(See www.jonahhouse.org). This past weekend, one

are hoping and praying for her healing, and mobilizing folks to work

Many of us are especially concerned about Fr. Bill Bischel. "Bix," as

he is known, is an 83-year old Jesuit from the Catholic Worker

doing time for a plowshares disarmament action. He could be released

at the end of June, but will then be sentenced for his part in last

year's protest (and probably get another 6-12 months). Two

years ago, Bix's doctor gave him six months to live. He needs to take

nitro glycerine every day for his heart condition. Bix had visited

Hiroshima in 2009, and was so moved that he decided to undertake civil

disobedience for nuclear disarmament, even at the risk of his life.

Many of us are praying with him on his paschal journey for peace.

Since he went into prison on March 28, Bix has traveled the nation. He

started in the in ; then

after a few weeks, without notice, he was shipped across the country

in a two week trip that nearly killed him. They flew him in chains to

, then bused him to Pahrump, , and then flew him to

. From there, he was flown to the infamous

Federal Penitentiary -- a notorious transfer center where cruel and

inhuman punishment is the norm. Then, he was shipped to

and landed at the Sheriff's Detention Facility

where he now sits.

On April 14, Bix wrote from about his initial weeks in prison

I shuffle around the common area, and I thank God for being here

and for the peace I experience. I am not anxious or overly concerned

about anything… [I have] things wrong from head to toe, move slowly,

tire easily, and take a half ton of pills to prolong breath and life

[but] I'm blessed by the peace and quiet spirit inside. I'm not

concerned about trying to be more than I am with the other inmates.

knowledge on so many things… I'm lucky to be here.

to make my bunk. I have to sit down a few times in the process. It

area. I don't feel panicked or upset about my condition. I know I can

keel over at any time, but I feel very much at peace with this

condition and understand and accept it -- thankfully -- as part of my

alert, i.e., at rest in the presence of God. I ask God to lead me as

God sees fit. There is no anxiousness or compulsiveness or resolve to

preach or hold prayer sessions or do any "religious actions" -- just

be and shuffle around. There are four TVs which I avoid, with their

steady diet of sex and violence. I am so thankful to feel at peace

with my life. It's a gift from God and I do feel God working in and

with me. I could be wrong, but this is what I experience.

After Bix landed in , his primary support person and old

friend Joe Power-Drutis flew there to be near him. Joe writes regular

updates about Bix and the others (see www.disarmnowplowshares.org).

On May 7th, he wrote of his visit with Bix

of being unable to hear because of fluid in his ears, dizziness and

lightheadedness, pointing with his fingers that he is struggling to

push the right numbers on the phone -- eyes glassed over, flat affect,

and complaining that his gait is so poor, yet he has been commanded to

"keep moving." He requested a wheelchair and was refused. He went on

locked in there, with woefully inadequate bedding and clothing, for a

week. He repeatedly asked guards for clothing and an extra blanket,

and was laughed at and ignored. At some point after repeated requests,

another inmate gave up his blanket to Bix.

hands and feet, leaving them white and ice cold when his overall body

temperature falls. Following this, his hands and feet are filled with

pain, like being jabbed repeatedly with needles. He spoke of the

the base at and across the blue line at Y-12. For these acts he

is ready to remain in prison and pay the ultimate price. But this in

done to him. The unjust and unlawful acts perpetrated on him are

Yesterday, Joe told me that Bix is better. I asked Joe to ask Bix for

a message, and Joe sent this on. As you see, Bix remains strong in

spirit. Despite the cruel and inhuman punishment which is our evil

prison system, Bix has kept his focus on Jesus and the .

His heart is in the right place.

We Americans are lulled and brainwashed. We accept the security of

nuclear weapons as our guardians. As a result, we live a type of Midas

Touch, embracing gold and all that shines while we decay within from

greed, addiction, and selfishness. Beyond this, we arm ourselves more

and more for the destruction of others.

Jesus comes to us in the midst of this, and no matter how high the

waves of empire might be, that threaten to swamp us, he invites us to

walk the path he walks and to believe his Kingdom is real.

Jesus doesn't give up on us. He tells us, "Do not be afraid." He

invites us to follow him and walk through the violence, to walk in

resistance to the Powers that bring death. He invites us to a life of

real community where we care for each other as brothers and sisters.

No matter how small the seed of our efforts, the Powers fear most our

attempts to come together and live as God intended us to live.

the Spirit to come into our midst. "Where two or more are gathered,"

the Spirit will be. We must trust this and follow the call of our

hearts. We are called to say "yes" to God's invitation and to be a

part of God's Kingdom as it unfolds in our lives.

May we remember our imprisoned resisters and join their efforts for

peace and justice, for a world without cruel and inhuman punishment.

By line for attached photo Fr. Bill Bischel's mugshot from the county

Posted by Max Obuszewski at 1:45 PM