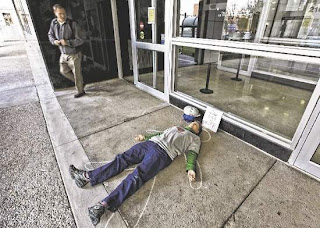 ,, prosecutors announced yesterday that they were withdrawing their threat to ban two anti-war activists from entering the Post Office forever. Christine Gaunt and Elton Davis were to have been sentenced on Friday, November 12, for trespassing after taking their protest of the funding of the wars in , and to the offices of ’s senators in the .

The sentencing, at which the Attorney will now ask only for fines, has been rescheduled for Wednesday, November 17. The prosecutor also said that contempt proceedings against Gaunt, who had returned to her protests at the in resistance to a judge’s pretrial release condition, will not be pursued.

prosecutors dropped their request Wednesday to permanently ban a Grinnell library worker and a laborer from the city’s for their persistent war protests.

The requested ban - believed to be the first of its kind in - was heavily criticized last week by constitutional rights advocates, who said it would violate the First Amendment, which guarantees free speech and the right to petition government.

Prosecutor John Sarcone said Wednesday that he didn’t believe the ban would be necessary. He declined to specifically address the possible constitutional questions that civil rights advocates raised last week.

“It is a victory,” said Christine Gaunt, 54, a Grinnell grandmother who has been arrested multiple times for her nonviolent anti-war protests. “We do have to celebrate those big-time when they happen, because they’re kind of few and far between.”

For the past eight months, Gaunt, a vegan hog farmer and library worker at , has frequently staged “die-ins,” where she outlines her body in chalk dust and pretends to be dead in or near the offices of Sens. Chuck Grassley and Tom Harkin. It’s an attempt to persuade elected officials to stop voting to continue financing and supporting war.

Federal protection officials have typically scooped her limp body into a wheelchair and escorted her from the building, often giving her a $100 citation for trespassing.
Gaunt and Elton Davis, 48, a self-employed laborer from , were arrested in August on trespassing charges. Gaunt received an additional charge of criminal mischief for her chalk dust markings.

Typically their arrests draw little attention, since both have faced multiple charges in connection with protests in recent years. Gaunt has served a total of at least nine months in jail, while once spent three months in jail for anti-war acts.

But the request from Polk prosecutors to Iowa District Judge Odell McGhee to permanently ban the two from the caught the attention of such groups as the American Civil Liberties Union of . Executive Director Ben Stone last week called for “tremendous scrutiny” of the unusual sentence request.

Sally Frank, a Drake University law professor who is married to Davis and is helping represent him and Gaunt, called the unusual sentencing request concerning.
“The right of petition is a central part of our constitutional rights, and to try to permanently prevent somebody from petitioning their senators is a severe violation of their rights,” Frank said.

Spokeswomen for Harkin and Grassley have said neither the senators nor their staffs requested the permanent bans.

said his only regret is that his work hasn’t been more successful.

“Some people think we don’t support the troops, that we don’t notice that there are 3,500 Iowans that are currently serving in ,” said. “But that’s why we’re doing it. These people are suffering from PTSD (post-traumatic stress disorder) and their families are suffering, too. Everyone is suffering except for the wealthiest 1 percent, of course.”

A man leaves the in on Wednesday afternoon as Chris Gaunt of Grinnell lies outside the building in protest of war.

Posted by Max Obuszewski at 5:25 PM